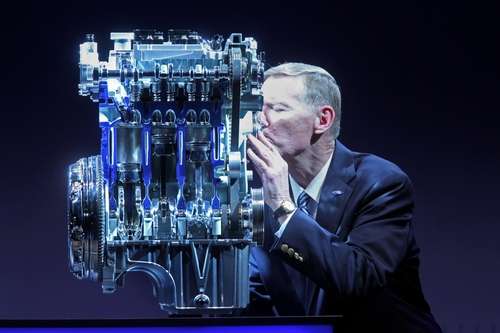 The new 1-liter EcoBoost 3-cylinder turbocharged engine will deliver 125hp, while delivering a combined fuel economy of 56.5mpg and ultra-low CO2 emissions. A 100hp version will also be built. The EcoBoost will be available on several models which include, Ford C-MAX, Grand C-MAX, plus the new Ford B-MAX which enters production in mid 2012.

"The new 1.0-liter EcoBoost and our entire family of EcoBoost engines – represent technology breakthroughs that deliver power, fuel efficiency and low CO2 emissions through turbocharging and direct injection,” said Alan Mulally, President & CEO of Ford. “These engines are delivering the fuel-efficient vehicles customers want and value."
Ford has invested roughly $175 million to develop a special high-tech line at the Cologne Engine Plant to build the engine. The plant’s 870 employees will build up to 350,000 units a year of the new engine.

European production capacity could increase to up to 700,000 units per year as production of the small EcoBoost engine at Cologne is joined by Ford’s new engine plant in Craiova, Romania, in early 2012. Ford hope production will expand outside of Europe to deliver global capacity of up to 1.3 million 1-liter EcoBoost engines per year.

The new engine was developed by powertrain engineers from Dunton and Dagenham in the UK. This is Ford's smallest gas engine, the lightweight 3-cylinder can fit onto a sheet of paper. The 1-liter EcoBoost also has the highest power density of any Ford production engine to date.

“The new 1-liter EcoBoost engine is a true collaboration from start to finish, with expertise from Ford specialists across Europe leveraged in designing both the engine and the cutting-edge facility in which it will be produced,” said Stephen Odell, chairman and CEO, Ford of Europe. “This will be reflected in the class-leading European CO2 emissions of the new 1.0-liter EcoBoost Ford Focus when it debuts in early 2012; low emissions that will be achieved alongside the spirited and refined performance that customers expect from Ford.”

Graham F wrote on February 16, 2012 - 5:36am Permalink
Fantastic news. I've just read that the final gearing on the focus will be in the region of 30mph per 1000 rpm. That's the same as my 1.9 TDI Audi A4. So now Ford have made an engine for a small car that is capable of allowing the car to cruise leisurely at motorway speeds. Brilliant.

For Some Former Daimler Managers Daimler Is Authority, While Tesla Is Like a Startup
How Daimler Unintentionally Subsidizes Tesla Giga Berlin
END_OF_DOCUMENT_TOKEN_TO_BE_REPLACED