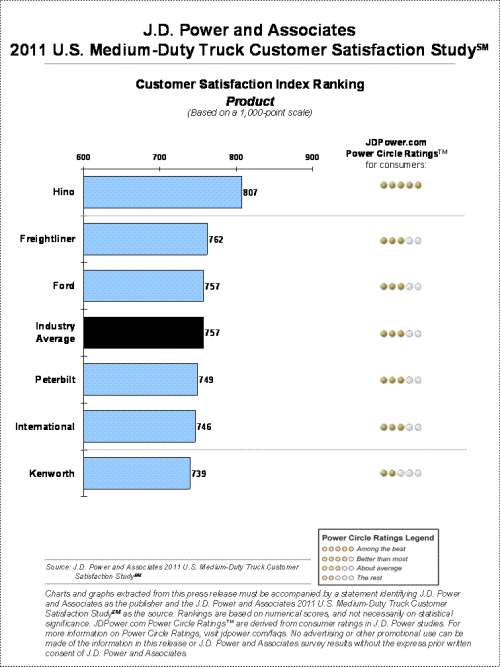 The quality of big workhorse trucks in America has continued to steadily improve in the past five years, but customer satisfaction has fallen, according to a J.D. Power and Associates study that came out today.
Advertisement

The 2011 U.S. Medium-Duty Truck Customer Satisfaction Study from J.D. Power, the auto industry's leading research firm from Westlake Village, Calif., concludes that owner-reported problems decreased by 26% between 2007 and 2011. And while that is an indication of higher quality, it is mitigated in part by a dip in owner satisfaction by 27 index points on a 1,000-point scale among relatively new trucks that have been owned for between 13 to 18 months.

“On the surface, it seems contradictory that owner satisfaction would decline at the same time that owners reported fewer problems,” said Brent Gruber, senior manager of the commercial vehicle practice at J.D. Power and Associates.

“Yet, when we dig deeper, we find that it’s not the number of problems, but the nature of the problems that are causing owners to be less satisfied with their trucks.”

The top brand ratings went to Hino, Freightliner and then Ford Motor Co. Hino performed well across all factors of driving satisfaction, particularly in engine satisfaction and overall quality. Freightliner made a significant jump from last year, primarily due to ownership satisfaction improvement.

The study found that OEMs have made significant upgrades in quality when it came to braking systems, wheels and tires and the trucks' cabs and bodies, cutting down on the total number of problems. At the same time, engine problems in trucks rose by 13 problems per 100 vehicles during the study period.

“Electronic control module calibration and regeneration system problems now impact 46% of medium-duty truck customers who experience an engine-related problem. Medium-duty trucks are sophisticated vehicles that are often used for more demanding applications. Between the complexity of the truck and engine and the rugged use, there is a lot that may go wrong with these trucks. However, manufacturers are continuously striving to improve their overall quality and they’re meeting that objective. Now they must focus on reducing the number of engine-related problems, while simultaneously trying to meet the demands of new fuel efficiency and emissions standards.”

The 2011 U.S. Medium-Duty Truck Customer Satisfaction Study was based on responses from 1,037 primary maintainers of 2010 model-year Class 5, 6 and 7 conventional cab medium-duty trucks. The study was done in June and July.