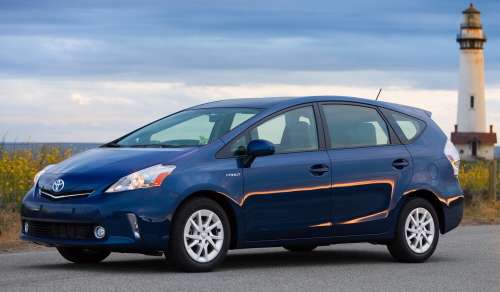 The Midwest regional regional press launch of the family-oriented 2012 Toyota Prius v, the second member of the Prius lineup, is scheduled for this morning at the Eagle Crest Conference Resort in Ypsilanti, Mich.
Advertisement

The program for reporters and auto critics runs from 9:30 a.m. to 3 p.m. today and will feature a 10 a.m. presentation by Ed LaRocque, Toyota’s national marketing manager-advanced technology vehicles. Reporters, recovering from heavy overnight storms, will be able to test drive Prius v (pictured) automobiles in Washtenaw County, west of Detroit.

The 2012 Prius v, with “v” denoting the vehicle’s versatility, aims to meet the needs of growing families with active lifestyles while providing the same attributes traditionally found in the Prius DNA. It shares the current-generation Prius’ platform and Hybrid Synergy Drive technology.

Featuring a compact exterior yet spacious interior, the Prius v will feature over 50-percent more interior cargo space than the current Prius. It is also the first Toyota vehicle equipped with the new Entune infotainment system, according to Toyota spokesman Curt McAllister.

The new v not only is expected to deliver 44 miles per gallon when performing at peak efficiency, but also will be roomy enough to serve up more cargo space than three-quarters of the SUVs out there.
Um, yeah, and it's got a moonroof and push-button start, too. Forget the key. That's so old school.

The v hopes to capture the attention of families on the go.

A Toyota spokesman said the price for the Prius v has not been determined. Other new Prius models start at just under $24,000. Auto critics have speculated in published articles that the car will go for between $25,000 and $39,000.

The Prius v, which comes with five cupholders and as a silly amenity offers room in the back to store umbrellas, uses a Hybrid Synergy Drive function to get its amazing mpgs. The system gives the car outstanding mileage, low emissions and no need for recharging.

Toyota considers the car a value-driven option for discerning buyers.

“The Prius v brings leading-edge hybrid technology to customers who need more room,” said Bob Carter, general manager of Toyota. “It produces 66 percent fewer smog-forming emissions than the average new vehicle and will have the best mileage ratings of any SUV, crossover or wagon sold in America” when it hits showrooms in August.

The Hybrid Synergy Drive system uses two high-output motors – an 80 horsepower unit for the transaxle and a smaller motor that is the vehicle's electric power source. Power sourcing is part of the v's charm. Energy can come from one motor or the other, or a mix of both. An internal computer controls where the power comes from, based on driver need.

The Prius v comes with a 1.8-liter 4-cylinder engine that generates systemwide horsepower of 134. The engine is as quiet as a church mouse, as is usually the case with Priuses that have been road tested over the years.

The Prius name has been around for 14 years, with more than 2 million cars sold. Safety has always been a strong point and the Prius v is no exception.

There are seven airbags on the v. And the car's platform uses steel, used in strategic ways to increase occupant safety. This bolsters strength without adding weight.

Family-friendly elements are best underscored by Toyota's use of SofTex material for its seats. It's more lightweight than previous materials that have been used on Prius models, and it's easy to clean up things that might spill.