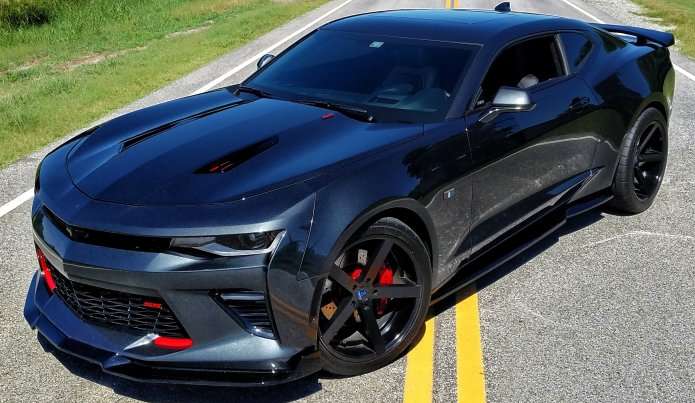 The TorqueNews/Camaros Unlimited Camaro of the Month for September 2017 is the 2016 Chevrolet Camaro 2SS in Nightfall Gray owned by Shawn Wray.
Advertisement

Each and every month, TorqueNews works with the members from the Camaros Unlimited Facebook page to select our Camaro of the Month. The process begins with the members of the Camaros Unlimited Facebook page – more than 41,000 of them – nominating their favorite Chevrolet Camaro owned by a fellow member of the page. Once five (sometimes six) cars/owners have been nominated, the voting begins and when the balloting closes – we have our Camaro of the Month.

For September 2017, the Camaro of the Month is the sinister-looking 2016 Chevrolet Camaro 2SS owned by Shawn Wray. We spoke to Shawn about his 6th gen Chevy muscle car and below, you will find the story of his Nightfall Gray Camaro.

Ive always been a Camaro fan, and this is my third Camaro.

I fell in love with the 5th gen Camaro when it debuted its first release. In 2012 I bought a 2013 2SS/RS, and enjoyed every minute that I had it. When we started hearing rumor of the 6th gen, i followed every media release and saw numerous renditions that people were coming up with prior to the debut.

Although I wasn’t interested in buying one, I still wanted to know everything about it. In 2015 when they officially released the "CamaroSix", I fell in love all over again. Seeing all of the redesigned body features, and reading all of the upgraded specs and weight reductions, I had to have one. About 4 months after the release, I traded in my 2013 2SS/RS and bought a 2016 Nightfall Gray 2SS. The feel of this new Camaro was a total night and day difference.

It’s taken the aftermarket companies a while to start releasing alot of parts, but so far my modifications include:

I’m far from done, some of my future plans include, long tube headers, custom grind cam, some port and polish work, and a good dyno tune.