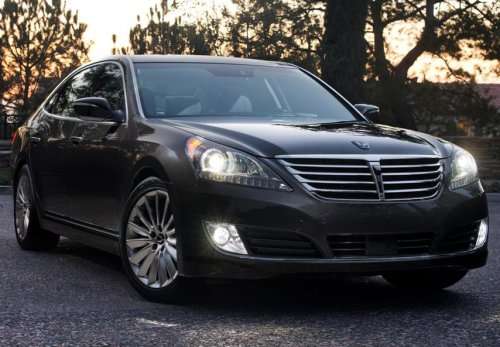 The 2014 Hyundai Equus debuted this week at the 2013 New York Auto Show with a refreshed exterior, a refined suspension setup and more high end luxury technology on the inside to allow this sleek Korean super sedan to keep up with the best luxury brands in the world.
Advertisement

Thanks to the company video that was issued earlier this month, there weren’t all that many surprises with the New York Auto Show debut of the 2014 Hyundai Equus but that doesn’t make the revisions to the incredible range topping sedan any less impressive. According to Hyundai, the Equus is “the number-one shopped premium luxury sedan, well ahead of Mercedes-Benz S-Class, BMW 7-Series, Audi A8, Lexus LS, and Jaguar XJ”. That is some serious competition so while the current Equus is good, the super luxury sedan segment is all about staying fresh and offering more than the other guy – both of which are achieved with the 2014 Equus. By the way, while “number one shopped” is a fairly vague term, we figure that it has to do with the number of people who research the Equus when looking to buy a new premium luxury sedan.

The outside of the 2014 Hyundai Equus retains the same sleek form as the current models but the company has made a handful of tweaks to the styling that will allow it to stand out from the 2013 version. Across the front end, the lower fascia has been shifted around a bit with larger openings and new “filler” in those openings. Also, the chrome accent strips located under each headlight assembly have been removed from the 2014 Equus which is kind of surprising as these unique trim pieces added a bunch of bling factor to the front end. Out back, the taillights of the 2014 Equus are the same shape as the 2013 model year version but the texture of the lens has been changed to provide a more modern, upscale look. Like the front end, the rear end of the 2014 Equus does away with the chrome strips that started on the side of the car and wrapped around the corners, ending just past the taillights. Finally, the big chrome rims from the current Equus are gone and in their place is a set of 19” turbine style wheels. Unfortunately, those colors discussed in the company video a few weeks back are not all destined for the US market as only Night Shadow Brown (shown on the right) joins the current list of four color options.

Inside, the changes made to the 2014 Hyundai Equus are largely found through the dash and center console where the redesigned layout features a 9.2 inch infotainment touchscreen in the center stack while the all new gauge cluster features a 7 inch thin film transistor (TFT) display on the Equus Signature while the Ultimate package calls upon a massive 12.3 inch gauge and driver information area. A new steering wheel carries controls for a variety of vehicle and infotainment systems while new Ivory leather and “ultra premium genuine wood trim” throughout the cabin enhances that super luxury feel. Finally, the 2014 Equus offers a 9.2 inch video screen for each of the rear passenger seating positions where the 2013 model just had one central monitor. This new design will allow two little rich kids to watch different programs while driving to their horse riding lessons instead of them both having to watch the same thing. In short, the 2014 Equus doesn’t force the driver or passengers to deal with many “first world problems”…even on the longest trips.

The 2014 Hyundai Equus will draw its power from the same 5.0L Tau V8 as the current model with 429 horsepower and 376lb-ft of torque sent to the rear wheels via an 8-speed automatic transmission. While more power could never hurt, the fact that the 2014 model uses the “old drivetrain” isn’t a bad thing by any measure as this engine makes the big, brawny Equus a blast to drive. Where the engineers have made some adjustments to the on-road behavior of the 2014 Equus is in the suspension system, where the standard air suspension setup has been recalibrated to improve handling without compromising ride quality. Even though the Equus is a premium luxury sedan, the Sport suspension mode allows this heavy hitter to make good use of all 429 horsepower in a straightaway and around turns.

Click any of the thumbnails on this page for a closer look at the 2014 Hyundai Equus inside and out.