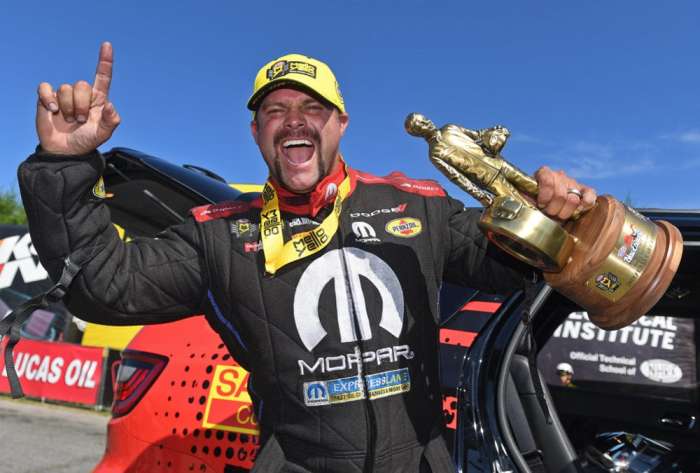 After dominating the NHRA funny car class for the past few seasons, the rest of the teams are finally catching up to the Don Schumacher Racing Dodge Charger drivers. Unlike past years where a handful of drivers won the majority of the races, the 2019 season has been full of parity, with seven different drivers winning during the first half of the schedule, with wins by each manufacturer.

With 24 races on the schedule, the New England Nationals mark the start of the second half, with the New England event and the following five deciding which drivers will battle for the championship in the unpopular playoff-style format.

In other words, the NHRA funny car drives are getting down to crunch time, so every round win is important from here on out. With that in mind, every contender wants to chalk up a few wins in order to secure a spot towards the top of the playoff list, and that is exactly what Matt Hagan did with his Dodge Charger Hellcat funny car this past weekend.

Qualifying
The Don Schumacher Racing Dodge Charger funny cars came into New England with big speed, posting the 1st, 2nd, 4th and 6th quickest times in the first round of qualifying. Meanwhile, the John Force Racing Camaros struggled in the first round while Bob Tasca III and his new Ford Mustang sat 3rd.

In the second round, the two top Toyota Camry drivers jumped up into the top spots, with J.R. Todd claiming the top spot and Shawn Langdon moving into 3rd, pushing the Charger drivers down a few spots as the Camaro drivers lingered at the bottom of the list.

In the third and final round of qualifying, Todd held onto the top spot in his Camry while Bob Tasca III put his Mustang in the 2nd spot, Ron Capps’ Charger was 3rd and Robert Hight got his Camaro up into the 4th position.

After the strong start, the DSR Charger drivers didn’t do all that well in the latter qualifying rounds, with Hagan starting 6th, Tommy Johnson Jr starting 8th and Beckman starting 11th. John Force qualified in the 7th spot in the short field of just 15 cars.

Eliminations
In the first round of eliminations, two of the four Don Schumacher Racing Charger drivers won, with Capps beating Mike Smith and Hagan beating teammate Jack Beckman, while Tommy Johnson Jr lost to Tim Wilkerson. Robert Hight got the win in his Camaro, beating Terry Haddock, but team leader John Force lost to the Toyota of Cruz Pedregon in the first round.

In the second round, Capps and Hagan squared off in a Hellcat-Hellcat battle, with Matt Hagan taking the win on the holeshot while also running the quicker time. Also in the second round, Bob Tasca III continued his winning ways, beating Pedregon while Shawn Langdon beat Robert Hight and top qualifier J.R. Todd lost to Tim Wilkerson.

In the semifinals of the funny car class, the New England Nationals had a Ford-Toyota matchup and a Ford-Dodge matchup. In the Ford-Toyota battle, Shawn Langdon overcame an early disadvantage to beat Tim Wilkerson’s Mustang and in the Ford-Dodge race, Matt Hagan followed suit – overcoming Bob Tasca’s holeshot lead to take the win. 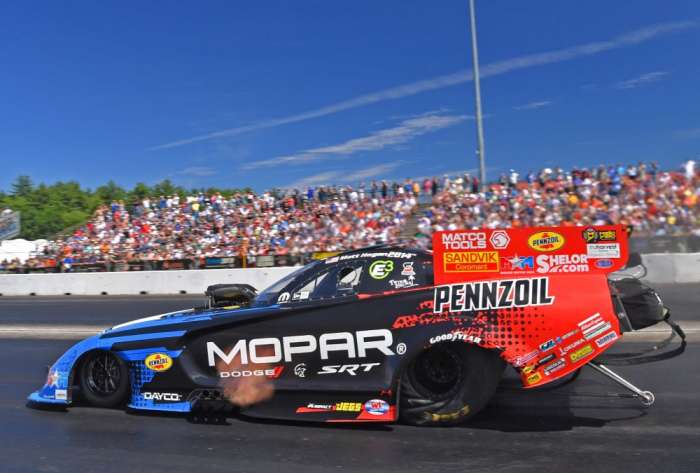 In the finals, Matt Hagan grabbed an early lead and never looked back, running a 4.014 at 322.81 miles per hour to beat Langdon’s Toyota, which ran a 4.046 at 317.46 miles per hour. This is Hagan’s second win on the second and third-straight win in this event.

Standings
After the 13th race of the 2019 season, Robert Hight holds the lead in the championship standings while teammate and team owner John Force sits second, just 176 points out of the lead. The Don Schumacher Racing group comes into the standings next, with Tommy Johnson Jr in 3rd (-188), Ron Capps in 4th (-209) and Jack Beckman in 5th (-228) while Matt Hagan is up to 8th (-309) with the win.