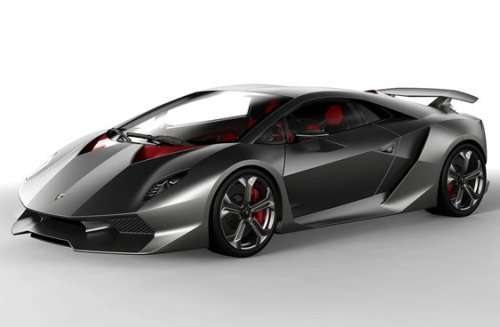 The first big news from Lamborghini came last evening when the company at the Frankfurt Auto Show unveiled the Gallardo LP570-4 Super Trofeo Stradale and today, company CEO Stephan Winkelmann announced that the Lamborghini Sesto Elemento will go into production with the first carbon hypercars reaching consumers in early 2013.
Advertisement

The Lamborghini Sesto Elemento was first introduced as a concept at last year’s Paris Motor Show and today, it has been confirmed that the revolutionary Lamborghini will become reality. Best of all, from today’s announcement, it sounds like the Sesto Elemento will likely see production in very similar form to what we have seen in the concept that has spent the last year touring the world. This means that the carbon fiber hypercar will likely be the first mainstream production vehicle to weigh under 1,000kg, with a curb weight expected to be right at 999kg – that’s 2,202 pounds for those readers in the US. Sesto Elemento is Italian for the sixth element and if you aren’t keen on the periodic table, the 6th element is carbon, signifying the massive amount of carbon fiber used to make this ultra light sports car.

The low curb weight of the Lamborghini Sesto Elemento is aided by the Italian automaker’s 570 horsepower V10 that channels the power to the ground via Lamborghini’s advanced all wheel drive system. The result of the combination of the 2,200lb body and the 570 horsepower drivetrain is a car that will both handle like no other car on the road, but it will also roar from nil to 62 miles per hour in just 2.5 seconds.

Unfortunately, there is some bad news about the Lamborghini Sesto Elemento. First of all, we can probably expect the Sesto to cost more than most of the people reading this article with make in a lifetime. Second, the company will only build 20 examples of the Sesto Elemento so even if you have a couple million bucks laying around, it might be hard to get your hands on one. Finally, the Sesto Elemento will not be street legal as it is only intended for track purposes so you aren’t likely to see this new hypercar cruising into your local car show. However, the exclusivity, price and illegalities aside, the 2013 Lamborghini Sesto Element is an incredible look at the future of high end supercars.

Lamborghini boss Stephan Winkelmann stated had this to say in announcing the company’s intent to produce the Sesto Elemento:
“The excellent feedback and the numerous requests we’ve had from our customers have really convinced us to embark on the challenge of producing a vehicle with unique characteristics. We are proud that what a year ago was just a ‘technology demonstrator’ of future super sports cars, even though in working order, will become a small series reality. Only 20 units of the new Sesto Elemento super sports car will be produced, and will be destined only for track use. We’re planning to deliver the first cars at the beginning of 2013.”

Check out the gallery on the right for a closer look at the Lamborghini Sesto Elemento and click the links below for more coverage from the 2011 Frankfurt Motor Show!

Tesla Contemplates A New Strategy for China Retail even As Sales Boom
Jay Leno on Elon Musk & EVs: “I Think He Should Get ... Credit"
END_OF_DOCUMENT_TOKEN_TO_BE_REPLACED