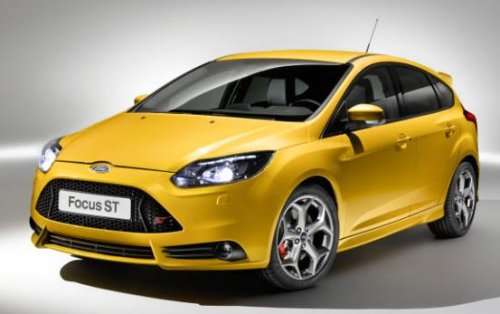 When the 2012 Ford Focus ST hits the streets in 40 markets around the world, it will be the first time that Ford has offered a performance car on a global level (in similar form) and today as the world prepares for the 2012 Frankfurt Motor Show, Ford unveiled the production version of the new high performance focus 5-door hatchback.
Advertisement

The production version of the 2012 Ford Focus ST not only ushers in the era of globally-shared performance models from Ford but it also introduces the global market to the first performance application for the 4-cylinder EcoBoost engine. Some markets (like the US) have seen the 3.5L EcoBoost V6 thrive in vehicles like the Ford Taurus SHO and the Lincoln MKS but with the Focus ST the EcoBoost name takes it shot at the hot hatch segment in 4-cylinder form.

This turbocharged, direct injected 2.0L engine churns out 247 horsepower and 265lb-ft of torque; sending the power to the front wheels via a 6-speed manual transmission with a torque vectoring system in place to help make the most of that power. The main concern with high performance front wheel drive sports cars (that’s right, this is a sports car – with room for four adults and cargo), is the dreaded torque steer which causes the car to yank one way or the other under hard acceleration but helping to fight that issue in the Focus ST is Ford’s electronic power assisted steering and torque steer compensation system.

Also, the EcoBoost technology allows the 2012 Ford Focus ST to offer 20% better fuel economy than the previous Focus ST but since that wasn’t available in the United States, American hot hatch fans may have to wait a bit for the official EPA numbers closer to the launch of the vehicle in the States.

The good news is that the production version of the 2012 Focus ST doesn’t look to differ much from the concept versions of the Focus ST shown off over the past year. The aggressive ST front fascia features the same blackout treatment that we saw on concept versions with the ST logo in the corner of the grille while the back end retains the cool center-exit exhaust and roofline spoiler.

From the looks of the images offered by Ford of the production version 2012 Focus ST, the biggest physical change comes inside, with the Recaro seats headed for production offering a slightly less race-ready look than those seen in the concept, with what looks to be adjustable headrests in place of the fixed units in the concept – although the contrasting stitch work and bolsters maintain the race-seat look.

Also, in addition to today’s reveal of the production 2012 Ford Focus ST comes the news that European shoppers will also have a chance at a larger wagon version. Station wagons – or anything that isn’t clearly an SUV or sedan – have long been less popular in the US than in Europe which had prevented Ford from offering previous high performance Focus hatchbacks like the Focus RS and previous generation Focus ST models so while the Focus ST wagon with a bit more cargo space isn’t headed for the US, the fact that the 5-door hatchback Focus ST will be in American showrooms soon should be great news for everyone who loves going fast on a budget in a vehicle that can do more than just go fast. The gallery on the right (shown as thumbnails here) offers a picture of the production and concept interiors for comparison.