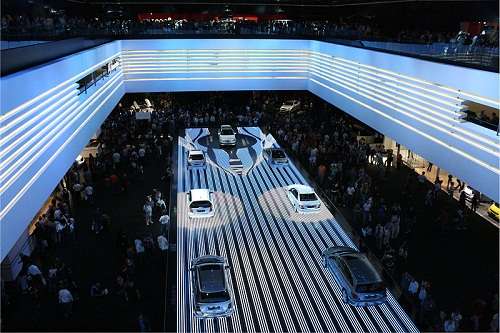 Fear of Crisis at the Frankfurt Auto Show

As the car industry enters the 2011 Frankfurt Auto Show the European car makers fear a slowdown in demand due to few reasons.
Advertisement

The 2011 Frankfurt Motor Show opens today for professionals and key stakeholders. The industry leaders have many reasons to celebrate the record car sales recorded since the beginning of the year. So far so good. There is a lot of optimism and positive attitude in Frankfurt today. The German markets have improved as German auto makers have sold more luxury and premium cars in China where the appetite has been growing for high end cars. The french car makers Renault and Citroën have also improved their sales performance in the first half of 2011. Yet, "manufacturers are currently thinking of sea looking calm and wondering when the storm is going to rise," writes Pluyette, Cyrille in yesterdays Le Figaro.

Cyrille sites three reasons for his concern. While the global markets and car sales have recovered after the collapse of 2008-2009 and the car industry has recovered faster than expected from the Japanese disaster, there still remain three area of concern that may slow down the demand and car sales: The trauma of 2008, EU Policies and growing cost of auto-supply materials.

For example, in July, the French auto maker Renault anticipated an increase in its 2011 global sales of about 3-4 percent and a decrease between 0-2 percent in the European sales.However, with the debt crisis and worsening economic climate, the forecast in the sector could be lowered. New car sales are sensitive to economic conditions. Already, Moody's believes that "the weakening of macroeconomic fundamentals is expected to reduce global demand" of vehicles over the twelve to eighteen months. The rating agency lowered its growth forecast from 5% to 3.5% for 2011.

Although their order books are still well filled, the European car makers for now are still traumatized by the 2008 crisis, writes Cyrille. "We have not seen any impact on our business. But we know that the economic situation will affect at one time or another," said Jürgen Stackmann (in the same reference), director of sales and marketing for Skoda.

European strict policies may further hamper the car sales in the continent. Papers are studies being published in Europe examining the business use of company cars. These papers call on stricter EU policies on company-car taxation saying the company cars are under-taxed and higher taxation could enhance the social welfare. "evidence from Belgium and the Netherlands suggests that pure business use represents only 20-30 percent of company car use, the rest being private use," writes Copenhagen Economics in its study Car Company Taxation: Subsidies, Welfare and Environment. Company car sales account more than than 40% of new car sales in Europe. In Italy the demand is already low and professionals expect a market decline of 4 to 6 percent in Europe. This means 2.1 million cars.

In emerging markets the outlook for car sales is still positive, but despite last year's 32 percent increase, in 2011 the car sales have only rose 3.5 percent in China. It seems that the market has reached a plateau in China and India. A possible market saturation and the cost of raw materials are contributing to this slowdown. According to Moody's the car manufacturers' margins could drop from 1 to 1.5 percent in 2011 compared to last year unless the car companies take measures to further reduce the cost of production. The rising cost of raw materials is contributing to this drop of car profits.

In the meantime the mood is generally positive at the Frankfurt Motor Show. It opens today for the professionals and journalists and on September 15, 2011 for the general public. Several cars have already made their debuts. To follow all the news about the 64th International Motor Show click to see Torque News' complete coverage of the 2011 Frankfurt Motor Show.

Tesla Contemplates A New Strategy for China Retail even As Sales Boom
Jay Leno on Elon Musk & EVs: “I Think He Should Get ... Credit"
END_OF_DOCUMENT_TOKEN_TO_BE_REPLACED