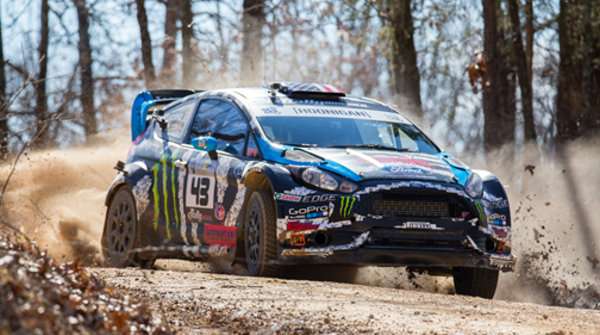 Ken Block, Alex Gelsomino and the Hoonigan Racing Division came into the 2014 100 Acre Wood rally in Salem MO having won the race in 6 out of the last 7 years so the #43 Monster Energy Fiesta ST was arguably the favorite to win the second stop on the 2014 Rally America schedule. I say arguably because Block was facing the 2013 Rally America championship team of David Higgins and Craig Drew in their Subaru Rally Team USA Subaru WRX STI. Block and Higgins went head to head last year, creating a great race to the championship in the final race of the season with Higgins walking away with the title when Block crashed.

Higgins got exactly the start that he wanted for 2014, winning the season opener a month ago in Michigan, so it was clear that Subaru Rally Team USA was the team to beat at the 100 Acre Woods rally. Block didn’t compete in the first event of the 2014 Rally America season but after a big win at the 2013 Global RallyCross finale, Block was looking to storm into Missouri with freshly designed 2014 Ford Fiesta ST rally car – and storm he did.

Ken Block and Alex Gelsomino came out of the gate hard, winning the first of 17 rounds by 6.4 seconds over David Higgins and Craig Drew. Block and Higgins turned in identical times in the second stage, but Block extended his lead by 1.2 seconds in the third round, 3 seconds in the fourth round and a hefty 12 seconds in the fifth stage when Higgins got a flat tire. Block and Higgins turned in very similar times for the sixth, seventh and eighth stages and the Subaru team had actually cut Block’s lead down to 20.6 seconds by the end of racing (stage 8) on day 1.

Unfortunately, during the ninth stages, the 2014 Subaru WRX STI driven by David Higgins and Craig Drew ran into engine problems that would force them to retire and by the end of the tenth round – Higgins was at the bottom of the order list and the Mitsubishi Lancer Evolution of Antoine L'Estage and Marshall Clarke was in second place, almost a minute and a half back of Block and Gelsomino’s Ford. Block would work to build his lead over L'Estage until stage 13 when the Mitsubishi was forced out of the race with an engine cooling problem. That allowed Travis Pastrana and Christine Beavis to take the second position, 3 minutes and 12 seconds behind Block and his 600hp Fiesta ST.

Block would spend the final four stages pulling away from Travis Pastrana’s Subaru and by the end of the race – the Monster Fiesta ST took the win by a margin of right around 5 minutes over the Red Bull Racing Subaru. While Block’s Ford took the big win – giving the Hoonigan Racing Division its seventh win in eight years – Subaru rally cars finished second, third, fourth, fifth, sixth and seventh.

The good news for David Higgins, Travis Pastrana and the rest of the Rally America field is that Ken Block is not running a full schedule this season so when the field takes to the track for the Oregon Trail Rally in May – Block won’t be there. Block and his Fiesta ST will compete in the Susquehannock Trail Performance Rally in late May but that is his last scheduled stop on the 2014 Rally America schedule. With Block only running two events, the odds are good that Higgins and Pastrana will battle for wins throughout the season and the overall championship.

This is a great start for Ken Block and his Hoonigan Racing Division and that is very important for Ford Racing, as Block appears to be Ford’s best chances of claiming their 4th straight Global RallyCross championship with Topi Heikkinen, Tanner Foust and Scott Speed all following the big money to Volkswagen teams for 2014.