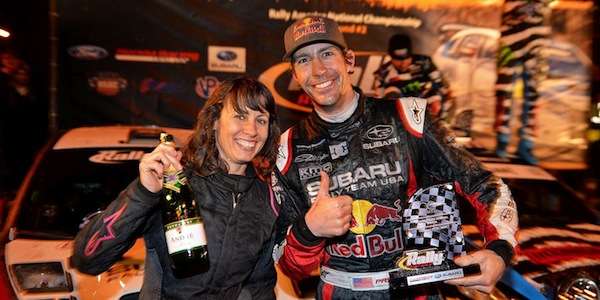 In his return to Rally racing, Travis Pastrana driving the 2014 Subaru WRX STI finished second behind Ken Block at Rally in the 100 Acre Wood.
Advertisement

It was day of extreme joy and extreme disappointment for the Subaru Rally Team USA driving the 2014 Subaru WRX STI cars. Travis Pastrana who rejoined Subaru Rally Team USA with co-driver Chrissie Beavis, hung on to take second place overall behind favorite Ken Block. This was Pastrana’s first rally podium after a nearly three year absence from the Rally racing with Subaru. The second place finish at Rally in the 100 Acre Wood was even more remarkable considering he withstood two intense days of rally racing with a repaired broken leg and recently dislocated ankle.

But teammate David Higgins had a disappointing second day. Higgins and Craig Drew attacked the first set of stages at the Rally in the 100 Acre Wood, but had a frustrating day ending up 20 seconds behind race leader Ken Block. Piloting the #75 Subaru WRX STI, Higgins and Drew won 4 of 8 stages. However, due to a Rally America rule that does not allow competitors to average more than 80mph, 12 of the seconds gained were not counted.

Anyone exceeding an 80 mph average speed will be assigned the time for 80 mph. Additionally, a flat tire on Stage 5 cost the #75 Subaru WRX STI another 15 seconds. On the second day disaster struck Higgins and Drew with an engine failure on Stage 9 that forced them out of the race. The Did Not Finish (DNF) broke an amazing streak of 22 consecutive podium finishes by Higgins.

Teammates Travis Pastrana and Chrissie Beavis had a great first day getting up to speed and adjusting to each other in the newly finished #199 2014 Subaru WRX STI. They ended Day 1 fourth overall, a minute out of third place. Given a new much faster car than Pastrana drove in the past, a new co-driver, and an injured foot, it was an amazing comeback to reach the podium in second place.

Block seems to own the Rally in the 100 Acre Wood race. The victory for Honnigan Racing’s Ken Block marks the seventh time he won this event out of the last eight attempts. “I felt as if I had very few mistakes this weekend,” said Block, “Unfortunately, my top competition fell out on day two and I was able to extend my lead. It took some pressure off, which I don’t like, because I like to push hard.  Instead, I was able to just enjoy these roads and put on a good show for the fans.”

Travis Pastrana and Chrissie Beavis can celebrate taking home “silver” with a second place finish with the 2014 Subaru WRX STI Rally car and were extremely happy to stand on the podium. Pastrana and Higgins will have some time to get ready for the next race at Oregon Trail Rally May 2-4 in Portland Oregon. Stay tuned to Torque News for the latest Subaru Rally Team USA driving the 2014 Subaru WRX STI cars news.