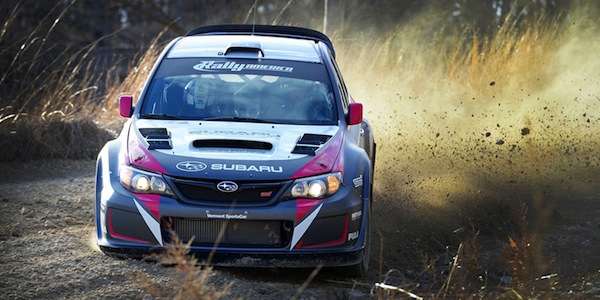 Travis Pastrana makes his return to driving the 2014 Subaru WRX STI this weekend at the Rally in the 100 Acre Wood.
Advertisement

Travis Pastrana has been seen testing the new 2014 Subaru WRX STI Rally car for Rally in the 100 Acre Wood and it looks fast. Pastrana will make his much anticipated return to rally racing this weekend with Subaru Rally Team USA driving the 2014 Subaru WRX STI at The Rally in the 100 Acre Wood. Pastrana has been gone from Rally racing for three years and returns to Subaru after competing in NASCAR.

Rally in the 100 Acre Wood takes place in and around Salem, Missouri and is the second race of the Rally America National Championship series 2014. Pastrana will be a teammate of David Higgins who won last years event and was the overall national title winner. Both will be driving newly-prepared 2014 Subaru WRX STI rally cars from Vermont SportsCar.

Pastrana is returning to Rally racing in the new 2014 WRX STI and hopes to regain his form before he left for NASCAR. In his last full season of Rally racing in 2009, he won the Rally America Championship. But things have changed since then. Pastrana will need some time to “get back up to speed again.” He will have both a new faster WRX STI and new co-driver to get accustomed to. Pastrana will be joined by veteran co-driver Chrissie Beavis.

“The 100 Acre Wood Rally will be a learning experience for me. The cars are much faster than when I last competed, I’ve got a new co-driver, and the competition is stiffer,” explained Pastrana. “Winning the Rally America Championship in my last full season (2009) will mean there will be a lot of expectations. It will take some time adjusting to my new co-driver, (Chrissie Beavis) and for her to adjust to me. The speeds of the team’s new Subaru will mean that I will have to do more than knock the rust off. I will have to improve if I want to keep up.”

David Higgins and Craig Drew on the heals of winning the Sno*Drift Rally in January, come into the race with high expectations. Higgins said, “This is always a tricky event with the variable weather conditions. Hopefully this year will be less wild. This year the competition will be stiff and now I’ve got a fast teammate to worry about too!”

The Rally in the 100 Acre Wood is named after the storybook home of Winnie the Pooh and is set in the foothills of the Ozark Mountains of Missouri. The event features ultra high-speeds on smooth and gravel roads that are a favorite of many rally drivers. However, in recent years the weather has unleashed freezing rain, sleet or snow in the days leading up turning the roads treacherously icy. Ken Block and Hooligan Racing driving the Ford Fiesta ST will be the driver to beat. Block will be trying for his seventh event overall victory. Block holds the most Rally in the Acre Wood wins of any driver.

The Rally in the 100 Acre Wood begins on Friday, February 21 with a Parc Expose in Steelville, MO at 12:00 pm. Fans can meet the drivers and view the rally cars before competition begins. Spectator guides will be available onsite. Fans can download a free event spectator guide here.

Travis Pastrana and teammate David Higgins will be driving the new faster 2014 Subaru WRX STI Rally cars. Can Pastrana and co-driver Chrissie Beavis keep the new Subaru Rally car on the race course? The weather forecast is calling for milder temperatures this year. That could be a help to Pastrana as he makes his return to to rally racing this weekend with Subaru Rally Team USA.

Patrick Rall wrote on February 20, 2014 - 8:45pm Permalink
Block will beat Pastrana just like he did in Global RallyCross. Im not so sure about beating Higgins but when Block could keep the car in one piece last year, he at least gave Higgins a run.