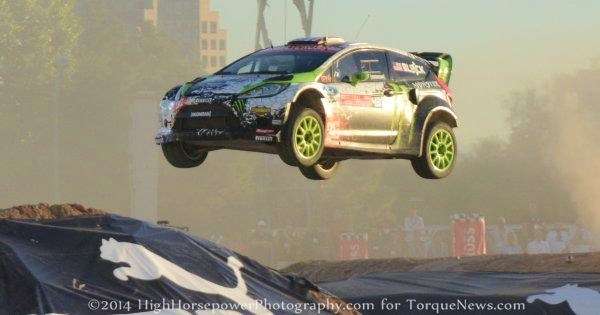 The 2014 Global RallyCross Schedule is the Biggest and Richest Yet

The Global RallyCross Championship announced details this morning on their 2014 schedule with 10 races and over a half million dollars in prize money – making the 2014 GRC season the biggest and richest in the history of the rapidly growing sport.
Advertisement

The Global RallyCross Championship has grown substantially since being introduced back in 2011 and the 2014 GRC season promises to be the most exciting for both the fans and the drivers. This year’s schedule offers the best chance for racing fans to check out the GRC in person with 9 events scattered all over the United States along with the season opener in Barbados while the drivers will be competing for over a half million dollars in prize money across those ten races.

The 2014 Global RallyCross Championship kicks off in Barbados at the Top Gear Festival Barbados before heading into the US for the other 9 events of the season. Stops around the country include Austin Texas, Washington DC, New York City, Charlotte North Carolina, Detroit (Yea!!), Daytona Beach, Los Angeles, Seattle and Vegas – where the 2014 GRC season will wrap up along with the SEMA Show for the 3rd year in a row. The entire 2014 Global RallyCross Championship is listed below with dates and while information is somewhat limited right now, we can expect more information (venues, race day schedules, etc) once we get closer to the start of the season in mid May.

The Global RallyCross Championship kicked off in 2011 when the field ran 4 events around the country. The 2012 GRC schedule expanded to 6 events and for 2013, the GRC field headed to 9 events with 6 in the US and 3 outside of the country. Tanner Foust won the championship in 2011 and 2012 while Topi Heikkinen won the 2013 championship in dominating fashion.

In addition to being the biggest schedule ever, the 2014 Global RallyCross Championship is the richest in terms of payouts and that should lead to the biggest fields that fans have seen since the racing association was created. Thanks to the folks at Red Bull, the 2014 GRC season will see more than a half million dollars in payouts for the individual races and the season championship with race wins being worth as much as $20,000.

While 2013 Global RallyCross champ Topi Heikkinen has moved on to the World RallyCross Championship for the 2014 season, GRC fans around the country will still see some of the best rally races in the world competing for that half million dollars in prize money. Just a few of the names that we can expect to see in the 2014 GRC lineup include Tanner Foust, Brian Deegan, Ken Block, Svere Isachsen, Travis Pastrana (now in a Subaru rather than a Dodge Dart), Patrik Sandell and Scott Speed. We will likely see Topi in his new VW Polo race car at one of the events (if not more) as Marklund Motorsports has announced that they will run at the X Games in Austin. The Dodge Dart teams have left the GRC but Ford, Subaru and Volkswagen should all be regulars in the 2014 series and we can also expect to see at least a few entries from Mitsubishi, Mini and perhaps even Hyundai and Chevrolet.

With so many stops around the US and enough prize money to attract a big field at all of those races, 2014 could be the breakout year for the Global RallyCross Championship. Lookout NASCAR…here come the production based turbocharged 4-cylinder hatchbacks that can turn both ways – and jump. If you live in one of the areas and you have interest in motorsports, make sure that you attend the nearest GRC race. I promise that you will not be sorry.