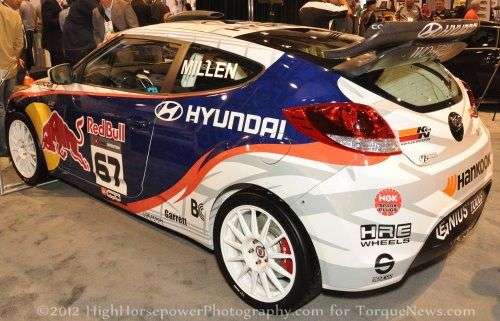 Hyundai to pull out of all North American motorsports

Rhys Millen Racing has announced that after the 2012 Global RallyCross and 2012 Formula Drift seasons, he will no longer be competing his familiar Genesis Coupe or Veloster race cars as Hyundai will pull out of North American motorsports as they re-evaluate their motorsports strategy – effectively ending the successful four year partnership between Millen and the Korean automaker.
Advertisement

While Hyundai has never taken a shot at the largest motorsports in the US like NASCAR and the NHRA, the company has had successful campaigns in various drifting associations, rally racing and hill climb events with their most recent victory coming at the 2012 Pike’s Peak International Hill Climb where Rhys Millen set a new overall record in his Hyundai Genesis Coupe race car. In a field packed with some of the most incredible race cars in the world, Millen’s record run in the Genesis Coupe is a truly remarkable feat; capping off what has been a great relationship between Millen’s team and Hyundai.

In addition to his success this year at Pike’s Peak, Millen has had a strong showing in his Hyundai Genesis Coupe drift car over in the world of Formula Drift. Millen currently sits in the third spot in the 2012 Formula Drift championship hunt as they head into the final event with leader Vaughn Gittin Jr just 43.75 points ahead. With a strong showing at the Formula Drift final in Irwindale California, Millen has a very real chance of winning the 2012 championship. Over in the Global RallyCross championship, Millen currently sits in the 9th spot in his Hyundai sponsored Veloster with two events left and while he is not mathematically eliminated from a run for the title – he would need the top cars to basically not show up for the last two events of the season.

Rhys Millen’s involvement with Hyundai went beyond the race track as his team was responsible for a variety of high performance SEMA Show cars over the past few year including the RM46 and RM500 custom Genesis Coupes along with the RMR Signature Edition Equus – making this separation all that more surprising.

It is hard to imagine that after setting a new Pike’s Peak International Hill Climb track record (and winning the 2012 Pike’s Peak event) along with possibly taking the 2012 Formula Drift championship that Hyundai would pull out of North American motorsports but company spokesman Jim Trainor has confirmed that the Korean automaker will indeed pull their factory backing of the rally and drift teams after the end of the current season. Trainor did, however, mention that they are still looking at the future of their involvement with the Pike’s Peak International Hill Climb after establishing themselves as the faster car up the big hill.

I am shocked to learn that Hyundai will be ending its factory backing of the rally and drift programs in the US after 2012 not only because of the success of their programs but also because of the performance oriented approach with some of their newer models. While the early days of Hyundai were all about fuel economy and low prices, the growth of the Korean automaker has brought about some amazing high performance models powered by incredible engines. The 3.8L V6 powering the Genesis Coupe, the 5.0L Tau V8 from the Genesis Sedan/Equus and the turbocharged 1.6L engine in the new Veloster Turbo are all very powerful engines that give their respective vehicles a whole new attitude without departing from the goal of offering impressive fuel economy. Motorsports don’t do that much to sell performance cars (keep in mind, the Ford Mustang was never in NASCAR until the past few years) but being involved in motorsports puts the performance cars in front of the target buyers. This is amplified right now by the fact that Millen has a real chance of knocking off factory backed Ford Mustang driver Vaughn Gittin Jr in the Formula Drift championship run.

It will be interesting to see what direction Hyundai heads with their motorsports program in the US – especially with the SEMA Show so rapidly approaching. Click here for a look at the official SEMA Show website.

Rhys Millen Racing has stated that they are currently seeking both a new manufacturer partner (an automaker) for next season as well as a new primary sponsor as Millen’s main sponsor was Hyundai. Luckily, with his success in the rally and drifting world, Millen shouldn’t have too hard of a time finding a new ride for 2013.

The 2012 Formula Drift season comes to an end at Irwindale Speedway on October 12th and 13th while the Global RallyCross season has two events left, both of which are in Las Vegas. On September 29th, the GRC cars take to Las Vegas Motor Speedway and on October 30th, the Global RallyCross 2012 campaign will finish up in front of the Las Vegas Convention Center as the 2012 SEMA Show opens.
The video below from Rhys Millen Racing shows his 2012 Hyundai race cars in action – make sure that your speakers are turned up so that you can hear the roar of 600 Korean horsepower.

John Goreham wrote on September 28, 2012 - 11:32am Permalink
Maybe it is best to go out on top. They were hugely successful. Also, maybe we will see a Sonata or Genesis kicking and taking in the NASCAR series someday.