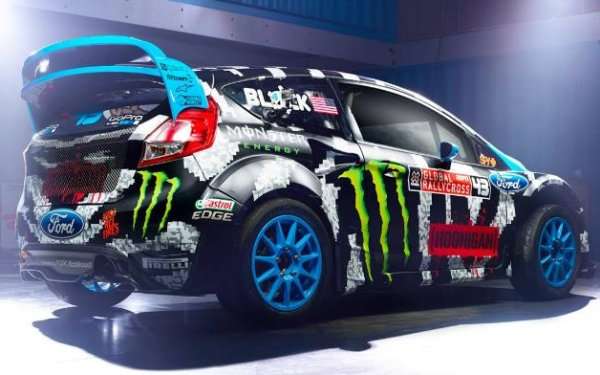 Ken Block has introduced his Ford Fiesta racecar that will compete in a variety of racing associations this year including the full 2014 Global RallyCross season – giving us our first look at the great looking Monster Energy Drink car that will give Ford Racing its best chance of success in the GRC ranks this year.
Advertisement

No Global RallyCross driver has a bigger fan base than the living legend Ken Block thanks to his incredible gymkhana videos coupled with his rally racing success around the world so the introduction of the 2014 Hoonigan Racing Division Ford Fiesta shown above is almost as big of news as was Tanner Foust and Topi Heikkinen leaving Ford for Volkswagen.

Block is one of the most well known names in motorsports even though rally racing – both stage rally and rallycross – is essentially in its infancy stage of life here in the US. Because of that massive fan following, the introduction of Ken Block’s new Fiesta rally car is one of the biggest stories from the world of rally racing this year, especially as non-racing topics go.

Ken Block’s 2014 Ford Fiesta rally car doesn’t have many surprises. It is still predominantly black and white with some light blue accents here and there joined by some red Hoonigan logos and, of course, the familiar Monster Energy Drink logos. New for the 2014 livery of Ken Block’s Ford racecar is the Minecraft-like pixilated design that is used to create the white and grey stripes along the sides along with the new Kill All Tires logo on the back.

Technically, the new Hoonigan Racing Division Fiesta rally car was introduced online in three different forms – one for Gymkhana Grid, one for Stage Rally and one for Global RallyCross. The cars are all aesthetically very similar with the exception of the logos on the door that mention the sanctioning body. The Gymkhana Grid Fiesta wears fifteen52 Turbomac white wheels with a multicolor turbofan on the front rollers. The stage rally version will seemingly wear a set of lightweight black wheels while the Global RallyCross configuration will have Block’s new Fiesta sporting a set of lightweight race wheels painted the same light blue as the accents on the body.

In addition to the 2014 Ford Fiesta rally car, this new pixilated design will be featured on a long list of Ken Block themed accessories from hats to shirts to stickers and likely much more over the course of the season. Block’s apparel is a major part of his popularity as fans are quick to snatch up the latest and greatest Monster Energy Racing goodies so I would fully expect that this new design will help to continue the success of Block’s clothing lineup.

The most important aspect of the new Ken Block Ford Fiesta rally car for 2014 is that we are seeing the car that will most likely give Ford Racing its best chance of rally racing success this year – particularly in the ranks of Global RallyCross. Ford dominated the GRC in 2013 but with Tanner Foust, Toomas Heikkinen and Scott Speed all leaving Ford for what must have been gigantic money with new Volkswagen teams, Ford Racing will have a much tougher time controlling the pace in the 2014 season.

Losing those three will most certainly create a bigger challenge for Ford, but Ken Block has gotten better and better over the past two seasons and he routinely finds himself in the hunt for the win. Coupled with his growing experience in GRC and the fact that the Fiesta rallycars were just plain dominant in 2013 – Block enters the 2014 Global RallyCross season as my odds-on favorite to win the championship. Foust will have to prove that the new VW can compete with the Fords so before a single lap has been run this year, I consider Block to be the man to beat in 2014.

In addition to running the full 2014 Global RallyCross schedule, Ken Block will also run three events as part of the new World RallyCross Championship, four events in the world of Stage Rally and two Gymkhana Grid events during the 2014 season.