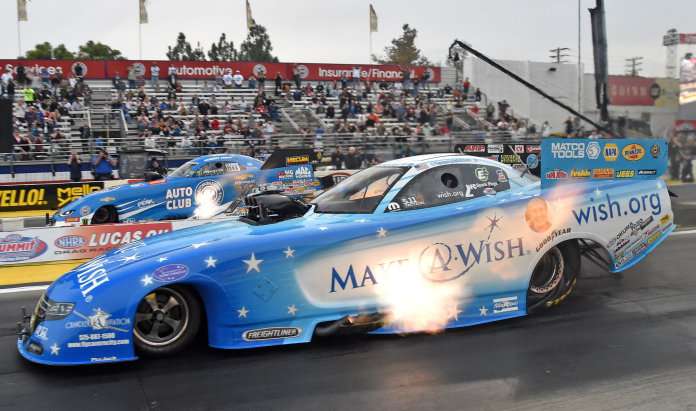 While Tommy Johnson Jr drove his Dodge Charger funny car to the event win this past weekend in Pomona, the big winner was Robert Hight, who piloted his Chevrolet Camaro to the 2017 NHRA Funny Car Championship title in the final race of the year.
Advertisement

This past weekend, the Don Schumacher Racing Dodge Charger teams and the John Force Racing Chevrolet Camaro headed to Pomona, California to square off in the Auto Club NHRA Finals – the last event of the 2017 season. Entering this final race, Robert Hight and his Camaro were in the top spot in the title run while Ron Capps and his Charger were close in second, with the last race of 2017 being the deciding factor in the championship battle.

In short, if Capps and his Charger made if further, Don Schumacher Racing would take home another Funny Car championship, but if Hight and his Camaro could simply outlast Capps – John Force Racing would bring home the first championship for the modern Chevrolet funny car program.

Things looked good early on for Ron Capps and Don Schumacher Racing, with his Charger sitting 6th on the ladder while Robert Hight and his Camaro were in the 15th spot. In fact, all four of the DSR Dodge Charger funny cars were in the top half of the qualifying order, so the Mopar race cars looked strong headed into the elimination rounds.

However, that was where it all fell apart for the Ron Capps title run.

Eliminations
In the first round of eliminations, Ron Capps and his Dodge Charger took on Del Worsham in his Toyota Camry. Worsham pulled a slightly better reaction time and he ran a slightly quicker ET, beating Capps and knocking him out in the first round of the event. At that point, Robert Hight had pretty much tied up the title, but he ended up driving his Camaro all of the way to the finals.

Hight and his Camaro knocked off Tim Wilkerson, Matt Hagan and teammate Courtney Force to get to the final round while Tommy Johnson Jr beat Bob Bode, Alexis DeJoria and teammate Jack Beckman to reach the finals.

In the finals, Tommy Johnson Jr pulled the better reaction time and when Hight went up in the smoke, the DSR Dodge Charger raced to the final funny car event win of the year. However, Robert Hight and his Camaro got the last laugh, taking home the 2017 NHRA Funny Car Championship.