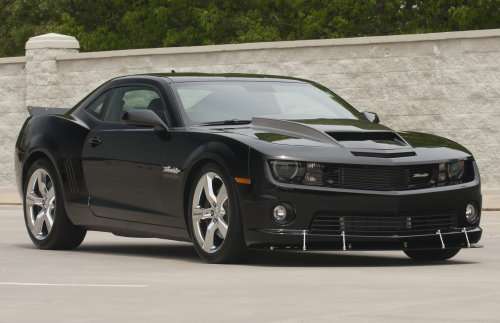 While the late Dale Earnhardt Sr. never won a NASCAR race in a Camaro, Dale Earnhardt Chevrolet of Newton, NC has announced that they will be building a collection of ultra high performance 2011 Chevrolet Camaros wearing the name Intimidator – Dale Sr.’s nickname for his powerful on-track personality.
Advertisement

The 2011 Dale Earnhardt Chevrolet Intimidator Camaro has a ton of work done to it on the inside and out to make it stand out from the run of the mill 2011 Camaro but the soul of this car lies under the hood. The standard LS3 engine has had the power increased to a whopping 704 horsepower and 695lb-ft of torque with the help of an Edelbrock E-Force supercharger topped with the Intimidator logo – forcing 11lbs. of boost into the engine to reach the lofty output.

While the internals of the LS3 are left alone, the fuel and intake system is upgraded to provide enough air and gasoline to feed the blown V8. Long tube headers connected to high flow catalytic convertors and a full 3” exhaust system help the engine to breathe while also making for one awesome roar.

Next, Dale Earnhardt Chevrolet adds cross-drilled brake rotors to help the stopping abilities of the Intimidator Camaro and a tuned suspension setup improves handling and gives the car a more aggressive stance – sitting about an inch lower than the standard 2011 Camaro SS. Sub frame connectors help to stiffen up the body to handle the force of 704 horsepower and adjustable front and rear sway bars allow for some suspension tuning for the driver’s needs.

Along the front and back of the Camaro, an aluminum spoiler and splitter have been added with adjustable support braces allowing the driver some aerodynamic tuning. A raised cowl style hood allows the blown LS3 to get as much air as it needs along with cooling the engine and the look of this special edition Camaro is capped off with unique tail lights and badges on the sides of the car, the hood, the rear and on the heritage style grille.

The price of the 2011 Dale Earnhardt Chevrolet Intimidator Camaro ranges from $79,993 to $85,993 depending on what options are chosen. The good news is that this seriously awesome tribute special edition package currently has no production limit but the dealership points out that, due to the high number of modifications, production is time consuming and essentially forces a limit in how many they can build. Head on over to their official website for more information by clicking here and check out the video and gallery below for a closer look!

Thanks to Big Jimmy D for the heads up!