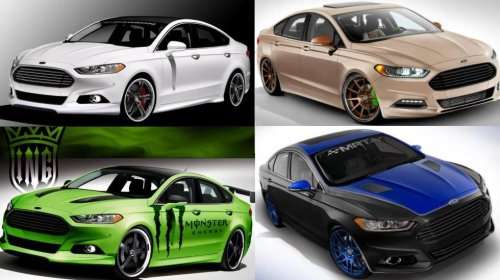 Ford SEMA Preview: the 2013 Fusion all dressed up looking mean and lean

Each year, the good people at Ford Motor Company put together a SEMA Show display that is easily among the best and with more of that excellence expected for 2012 – Ford has offered up their first round of SEMA artwork “teasers” with this first group focusing on the new 2013 Fusion sedan.
Advertisement

Each year, Ford Motor Company uses their massive indoor display to showcase a wide variety of their current vehicles all dolled up with items from their company parts catalog along with assistance from well known tuning companies and it comes as no big surprise that the all-new 2013 Ford Fusion will be one of the vehicles that gets the most attention at SEMA 2012. The new Fusion is expected to redefine the midsized sedan class with more style and efficient than any cars in the class but at the 2012 SEMA Show – Ford will show that the Fusion is more than just a sophisticated, efficient sedan. Helping showcase the Fusion at SEMA (and in the artwork available in the gallery on the right) are companies like 3D Carbon, Ice Nine Group, MRT and the Tjin Edition – all of which have added customization inside, outside and under the hood to transform the new Fusion into a far sportier beast. While details are limited, we do have an idea of what has been done to each of the new Fusion sedans teased on Facebook this morning with full information hitting when the SEMA Show opens later this month.

First off, we have a 2013 Ford Fusion powered by the 1.6L EcoBoost engine, mated to a 6-speed manual transmission and designed by the Ice Nine Group after the look of the cars in the Australian V8 Supercar Series complete with a Monster Energy paint scheme (bottom left in the collage). While we don’t know what all has been done to this Fusion shy of the green and black paint scheme and the huge rear wing, the unique 5-spoke rims wrapped in low profile tires appear to be hiding a big brake kit and the stance of the car suggests that there is an aftermarket suspension upgrade. Of this first collection of art work, this car is my favorite based strictly on looks.

Next is a 2013 Ford Fusion all wheel drive model powered by the 2.0L EcoBoost engine and a 6 speed SelectShift automatic transmission designed by the high performance Ford experts at MRT (bottom right in the collage). We can see from the image (it is the black and blue car in the gallery) that this Fusion features a unique hood, wheels and paint scheme while the notes accompanying the image promise some high performance engine and suspension items including the MRT Eco-Flow exhaust system. Considering that MRT has built up some mighty powerful Taurus SHO models with the V6 EcoBoost – I am confident that this car will pack as much added performance as it does attitude.

The third car to be shown off this morning on Facebook is another 2013 Ford Fusion all wheel drive model powered by the 2.0L EcoBoost engine and a 6 speed SelectShift automatic transmission but this sedan has been customized by the Tjin Edition (top right in the collage). On the outside, the Tjin Editon Fusion is modified with a unique Beige paint scheme featuring DuPont paint, a 3d Carbon lip kit, a Webasto sunroof, unique LED trimmed headlights/fog lights and 21” iForged wheels wrapped in Falken brakes. Inside, Latzkin leather interior a hi-fi Scosche sound system provide more creature comfort while a Vibrant turbocharger package, a custom side exit exhaust from Magnaflow, a Baer big brake package and a Pedders suspension system improves the overall performance of the vehicle.

Finally, we come to the white and black 2013 Ford Fusion all wheel drive model powered by the 2.0L EcoBoost engine and a 6 speed SelectShift automatic transmission that was designed by 3d Carbon (top left in the collage). Inspired by the “elegant, sophisticated styling of classic European sedans”, the 3d Carbon Fusion features a new body kit that gives the Fusion a sportier stance with the help of the large 5-spoke rims with a split spoke design. Behind the wheels we can see another big brake package but FoMoCo is short on the details for this model so, much like the Ice Nine Group and MRT – we will have to wait until the SEMA Show to find out what is going on under the hood and inside of the car.

With a couple weeks until the start of the 2012 SEMA Show in Las Vegas, we can expect more teaser artwork from Ford Motor Company in the near future. Click any of the thumbnails above on the right for a closer look at the four Fusion sedans headed to SEMA and stay tuned to TorqueNews.com for all of your 2012 SEMA coverage!