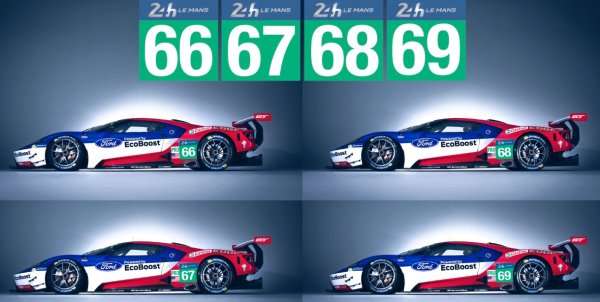 Ford Fielding Four Teams in the 2016 24 Hours or LeMans

Chip Ganassi Racing with take four new Ford GT race cars to LeMans later this year to compete in the world’s most well-known endurance race – the 24 Hours of LeMans – 50 years after the original Ford GT finished 1-2-3 in the legendary race.
Advertisement

Back in 1966, the Ford GT40 came into LeMans, France, with the hope of showing the world that the USA could build a proper road race car that would compete with the best of Ferrari and Porsche in what was, without a doubt, the world’s most grueling road race back then. In 1966, 55 cars entered the 24 Hours of LeMans and when time was up – only 15 cars were still on the track. Three of those 15 cars were Ford GT40s and they finished 1st, 2nd and 3rd, making the ’66 LeMans one of the most memorable events in the history of American motorsports.

Now fast forward to 2016, and we have the rebirth of the Ford GT endurance racing program. With the help of Chip Ganassi Racing, the Motor Company put two of their new GT race cars in the European FIA World Endurance Championship while another two are competing in the American IMSA WeatherTechSportsCar Championship. As you can imagine, Ford and Ganassi had their sights set on a return to LeMans for the 50th anniversary of that fabled 1966 race domination and with the recent announcement of the teams accepted into the 2016 LeMans race – Ford has good reason to have high hopes.

In the 60 car LeMans field – which is the biggest group in the history of the race – Ganassi will have all four of their Ford GT race cars competing for the title.

“It was great to see all four Ford GTs up there on the Le Mans entry list today,” said Dave Pericak, Ford Performance global director, who attended this afternoon’s press conference in Paris. “Newcomers are by no means guaranteed an entry, whatever their history or ambitions, so we thank the ACO for giving Ford the opportunity for a four car assault in June.”

Four Fords in the 2016 LeMans
While neither Ford nor Ganassi have announced their official driver roster for the 2016 24 Hours of LeMans race, the sanctioning body has approved the application of all four team cars. From the FIA, cars #66 and ##67 will keep their regular numbers while car #66 from the IMSA series will wear #68 and IMSA’s Ford GT #67 will become #69 for LeMans. In short, cars number 66, 67, 68 and 69 will all be new Ford GT race cars.

Of course, a great deal has changed since the 1966 LeMans race, with the most notable change in recent years being the introduction of the LMP (LeMans Prototype) class, which is a much quicker group than the LMGTE Pro class in which the Ford GTs will compete. Because of these quicker cars, the new GT race cars don’t have a real chance of claiming the top three podium spots – but they will battle for the class championship.

The problem for the Ford GT teams is, of course, the Corvette Racing teams which will also run in the 2016 24 Hours of LeMans. The Corvette Racing teams will be in the same class as the Ford GT teams and in the world of GT endurance racing, there is no team with more success than the Corvette crew. For Ford to claim any kind of victory, they will have to overcome the electrical gremlins that plagued the teams earlier this month in Daytona – then they will have to beat the championship Corvette teams.