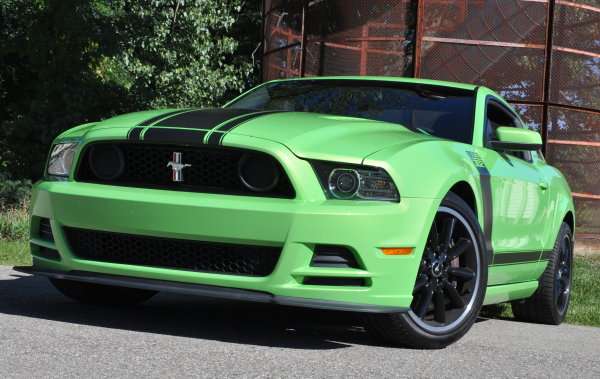 Ford Motor Company has included an S197 Boss 302 in new Mustang marketing materials along with showing off a 1971 Mach 1 at the Chicago Auto Show, leading many vocal social media participants to insist that these are hints to future models – so today we look at the likelihood of a new Mach 1 or Boss 302 Mustang.
Advertisement

The last time that Ford offered a Mach 1 Mustang was back in 2004 and the last Boss 302 Mustang was offered was in 2013 (shown above in Gotta Have It Green). However, there have been persistent rumors that Ford is working on one (or both) of these cars over the past few years, bolstered by things like unsubstantiated inside information, trademark filings and spy shot stories ripe with speculation. There has been no concrete proof of a new Mach 1 coming to the Mustang lineup since 2005, nor has there been any proof that there is a new Boss 302 on the way, but the rumors continue to pop up every time something new pops up on Facebook.

Boss 302, Mach 1 Featured by Ford
The newest bits of information which have once again rekindled the Boss 302 and Mach 1 rumors stem from the marketing information for the new 2018 Mustang and the Ford Motor Company display at the ongoing 2017 Chicago Auto Show.

In the marketing materials for the 2018 Mustang, there is a picture of the dashboard and we can see through the windshield that there is a 2013 Boss 302 parked in front of the new Mustang. That could mean nothing, but some people seem to think that it is a serious hint that there is another Boss Mustang on the way.

Next, there is a 1971 Ford Mustang Mach 1 on display at the Chicago Auto Show, but Ford has pointed out that the classic Mustang is part of a giveaway for charity. Even with that in mind, some people insist that this is a hint of a new Mach 1 coming in the next few years.

Could either of these rumors be true? Maybe.

A New Boss 302?
The Boss 302 Mustang offered back in 2012 and 2013 was a road handling model, designed to serve as a track friendly muscle car that you could drive every day. Those Boss 302 fans who wanted an even more extreme track machine could opt for the Boss 302 Laguna Seca, which had some unique features and offered improved performance when compared to the other Boss 302.

Ford did a similar thing with the new Shelby GT350, offering the lower cost GT350 for those who wanted more of a mix of performance and daily drivability, while the GT350R is more track-focused. The GT350 and GT350R are essentially a modern take on the 2013 Boss 302 and Laguna Seca, making it unlikely that Ford would offered up a new Boss 302.

Then again, consider the fact that the new Shelby GT350 is powered by the 5.2L flat plane V8, which drives up the cost of this car. Ford could (in theory) use the body, chassis, interior, suspension and braking bits from the GT350 coupled with the 5.0L V8 from the current Ford Mustang GT to create a new Boss 302. This would offer similar handling capabilities to the GT350, but less power and a lower price.

Would Ford really undercut the new Shelby GT350? I don’t think so.

A New Mach 1?
Next up, we have the rumor that Ford is working on a new Mach 1 Mustang. When the Mach 1 was offered back in 2004, it was a mid-level performance model between the Mustang GT and the SVT Cobra. That Mach 1 had a beefier version of the 4.6L V8 in the Mustang GT, along with larger brakes, better suspension components and a unique “shaker hood”, which fed air directly into the engine.

That Mach 1 was more powerful and handled better than the Mustang GT, but it wasn’t as powerful as the Cobra – nor would it handle as well with its solid rear axle.

A modern Mach 1 Mustang could be based on the Ford Mustang GT, with some engine revisions to increase the power of the 5.0L V8 and a new version of Ford’s Shaker hood setup – along with larger brakes, a more aggressive suspension setup and some unique body parts.

The only problem with that idea is that this vision of a new Mach 1 is awfully similar to the vision of a new Boss 302. Both would likely be based on the Mustang GT power plant with improved handling, braking and aerodynamics. Ford isn’t going to build two mid-level performance packages to fit between the Mustang GT and the Shelby GT350, but it seems possible that the Motor Company could roll out one of these new trimlines as an intermediate performance model which combines Shelby handling with 5.0L power.

Of course, that Boss 302 could have just been staged there for the image because someone on the photographer crew was driving one and the 1971 Mach 1 in Chicago really could just be there as part of the contest – but many enthusiasts online believe that these are hints to upcoming models. I’m skeptical, but it certainly seems possible that there could be a model between the GT and the GT350.