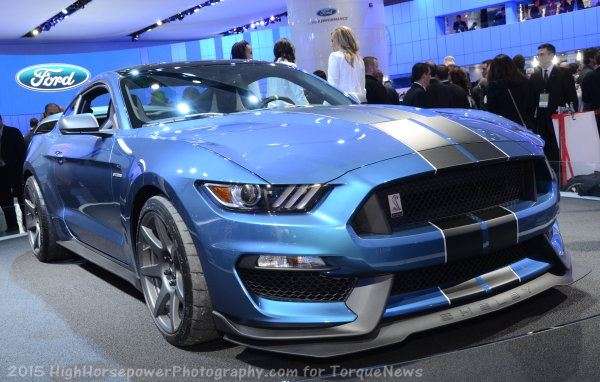 Estimated Power Figures for the F150 Raptor, GT350 Mustang are Played Out

Ford Motor Company has introduced some incredible performance models over the past few months, including the new Raptor F150, the Shelby GT350 Mustang and the Focus RS, but they have only offered up estimated power figures on all of those models – a decision which has quickly gotten to be very played out in the modern performance vehicle segment.
Advertisement

There was a point in time when the key bit of information at the debut of a performance vehicle was the horsepower figure, but over the past few years, many new go-fast vehicles have been introduced with only a basic range of power. When Ford introduced the new Shelby GT350 Mustang in LA, they promised us at least 500 horsepower. When the new SVT Raptor F150 was introduced in Detroit, Ford promised that it would have more power than the outgoing model, so we know that there will be at least 411 horsepower. There is word that the new Raptor will have 450 horsepower, but that isn’t official. When the Ford GT supercar was introduced in Detroit, we learned that it would have at least 600 horsepower. Even the new Focus RS only came with estimated figures, as the Motor Company guarantees that the new hot hatch will have at least 315 horsepower.

We know what they look like, we know what types of transmissions and drive configurations they will have and we know that they will all be awesome in their own way – but we don’t know how much power the Raptor F150, the Shelby GT350 Mustang, the Focus RS or the new Ford GT supercar will have when they arrive.

This isn’t Just Ford
While my gripe is with the estimated power figures for the new Mustang, Raptor F150, GT supercar and Focus RS, they certainly aren’t the only ones who have done this. General Motors did it with the C7 Corvette Z06, promising at least 625 horsepower. Chrysler did it with the Hellcat Challenger, stating that it would have at least 600 horsepower. It has kind of become “the thing to do” with a new performance model for the Detroit automakers, but it has quickly gotten to be played out. It was enticing when Dodge did it and it kept us on the edge of our seats when Chevy did it, so Ford had every right to jump on the “at least” horsepower bandwagon, but five vehicles at once is just too much.

I understand why Ford is doing this, as leaving questions unanswered keeps people talking about these cars. After all, here we are, talking about the F150 Raptor, the GT350 Mustang, the Focus RS and the GT supercar all at once, and while we aren’t speculating about how much power these vehicles will offer, we are discussing the vehicles themselves. Ford has kept us talking about their new performance vehicles, and we will surely do so until we know everything that there is to know about all of these models, but Im seeing more and more enthusiasts online complaining about the lack of solid power figures.

Fed Up Fans
In the world of Facebook fan pages and forum discussions, Ford fans are getting tired of guessing on numbers when talking about how badly the GT350R will beat the Camaro Z28 and Focus RS fans are getting tired of wondering how badly the new hot hatch sporting the blue oval will crush the Subaru WRX STi. In the world of online arguing over whose performance models are better, there are few vitals more vital than horsepower numbers and the vague “at least” numbers just aren’t good enough. This means for the fans, not knowing the power output is only slightly better than not knowing about the car at all.

In other words – Dear Ford, please make with some horsepower numbers for the Shelby GT350 Mustang, the new Raptor F150, the Focus RS and the GT supercar as soon as possible. The performance world is holding its breath as the horsepower war heats up – but the world needs those horsepower numbers to take to the streets.

Mark Wilson wrote on February 20, 2015 - 6:40pm Permalink
Uh author, I could be wrong but I believe Ford was the first to play this game back in late 2011 with the upcoming 2013 Shelby GT500. Ford first announced over 600HP and then when the car was shown in Detroit in January 2012 Ford said the 2013 Shelby GT500 would have 650HP and 600 ft-lb of torque. Which then became officially 662/631. ;) This game was not started by Dodge or GM...
Patrick Rall wrote on February 22, 2015 - 2:49pm Permalink
I understand that the recent cars mentioned above were not the first ever. Realistically, I'm sure that there was a car before the last gen GT500, but of the most recent batch, it started with the Hellcat Challenger. My point wasnt to announce who invented the idea - it was to point out that when everyone does it, Ford doing it with multiple vehicles at once isnt sitting well with the brand's fans.
Joe wrote on February 20, 2015 - 9:28pm Permalink
most of us in the Raptor kingdom are not worried about how much power it will have but that its coming to us with a freaking 6 cylinder..... yes it's boosted.... but my supercharged 6.2 making almost 600hp sounds way better than the soundtrack Ford installs to mask the fart can sounds of the ecocrap.