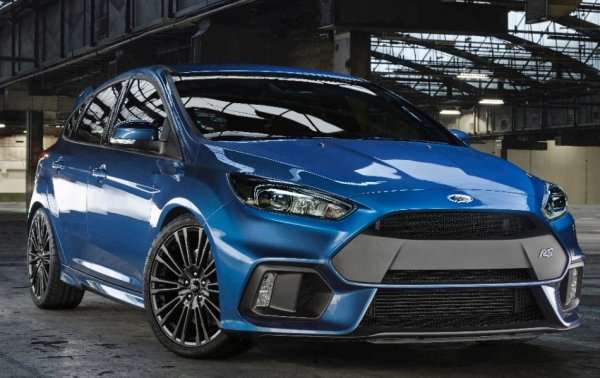 The Ford Focus RS Brings Mustang EcoBoost Power, AWD to the US

The next generation Ford Focus RS made its grand global debut this morning and, as expected, the first Focus RS sold in the USA will be powered by an advanced all-wheel drive system and the same EcoBoost engine that powers the 2015 Ford Mustang – except the Focus will pack even more power.
Advertisement

We have known for months that there was a new Ford Focus RS on the way and we had a pretty good feeling that it would likely feature the 2.3L EcoBoost engine that is also used in the 2015 Ford Mustang. We also had believed that the new Focus RS would feature all-wheel drive and, most importantly, it was expected that the newest Focus RS would be the first to be sold in the United States.

This morning, all of those beliefs and expectations came to volition as Ford Motor Company rolled out the next generation Ford Focus RS – a global high performance hatchback that features the 2.3L EcoBoost, advanced all-wheel drive and a proper manual transmission. Best of all, for the first time ever, this globally-marketed Focus RS will be sold in the United States.

At long last, hatchback lovers living in the USA will have a chance to own the American hot hatch that has been a leader in the European sport compact world for more than 30 years, as the Ford Focus RS joins a quickly growing lineup of high performance models sold in the US.

“The all-new Focus RS is a serious machine with high-performance technology and innovative engineering that sets a new benchmark for driving exhilaration on the road and track,” said Raj Nair, group vice president, Global Product Development, Ford Motor Company. “The RS line has a proud history of technical breakthroughs that have migrated to mainstream Ford vehicles to benefit all of our customers, and the new Focus RS is no exception. It’s a great example of our passion for innovation through performance, and creating vehicles that make people’s hearts pound.” The Drivetrain
Leading up to the introduction of the new Ford Focus RS, rumors indicated that it would derive its power from the same 2.3L EcoBoost 4-cylinder engine that has been critically acclaimed for its role in the 2015 Mustang. Those rumors also suggested that the Focus RS would have all-wheel drive and a manual transmission, in addition to the unique styling cues that allow the RS package to stand out from the rest of the Focus lineup. Amazingly, all of those rumors have proven to be true and the combination of these rumors-turned-facts make for one wicked little sport compact.

Under the hood, the new Ford Focus RS packs a very similar 2.3L EcoBoost 4-cylinder to that found in the 2015 Mustang, except the Focus RS version has low-inertia twin-scroll turbocharger with a larger compressor side, a larger intercooler, a revised intake setup that should allow for better air flow, beefier engine internals and a big dual exhaust setup. As a result of these differences, the Focus RS makes more power than does the 2015 Mustang with the same engine, but sadly, Ford hasn’t announced the official power ratings. As has become so popular in the performance car world, Ford has only offered up “at least” figures for the new RS, stating that it will have “well in excess of 315 horsepower”. The 2.3L EcoBoost in the 2015 Mustang offers 310 horsepower and while Ford has made no mention of torque numbers for the new Focus RS, considering that the Mustang EcoBoost has 320lb-ft, all of those new features for the Focus should help push that number up – if not significantly. I’m guessing that we will see something like 325hp and 350lb-ft of torque, but some of the rumors have suggested that the horsepower figure could be as high as 350 and if that is the case, the torque number could climb into the 375-390 range. However, even with “only” 325hp and 350lb-ft of torque, the new Ford Focus RS will pack enough power to keep up with any of the sport compact performance models sold in the US.

In addition to that high powered EcoBoost 4-cylinder, the new Ford Focus RS will feature an advanced all-wheel drive system that features torque vectoring for the best possible traction under any driving circumstance. This system will allow up to 70% of the power to be sent to the rear wheels while also using the high tech AWD setup to shift power to the wheels getting the most grip. Connecting the powerful turbocharged engine to the advanced AWD system is a proper 6-speed manual transmission and based on today’s announcement, it will be the only transmission offered in the Focus RS.

Finally, in working with Ford racer Ken Block, the suspension setup of the new Focus RS has been engineered to yield the best possible handling while maintaining the basic ride comforts needed for daily driving. As a result, the Focus RS will be one of the best-handling sport compacts sold in America – while the AWD system and powerful EcoBoost engine help to make it one of the fastest.

The Design
The new Ford Focus RS will look a great deal like the rest of the Focus 5-door hatchbacks sold around the world, but the RS package includes cues that make it look more aggressive while also improving performance. The uber aggressive front end has been designed to provide the best possible engine cooling, brake cooling and downforce while also looking very mean – and there is no question that the designers succeeded in making one great looking hot hatch. Along the sides, the Ford Focus RS wears more prominent side skirts and 19 inch wheels wrapped in Michelin Pilot Sport Cup tires. Ford hasn’t offered any information on the braking system, but I expect something big, likely from an aftermarket braking expert like Brembo.

Out back, a huge rear wing mounted atop the hatch is joined by a lower rear fascia that is every bit as aggressive as the front fascia, with an integrated diffuser design and dual exhaust tips giving this 5-door the high performance look and feel.
On the inside, the new Focus RS sports Recaro seats, a flat bottomed steering wheel, an RS-badged gauge cluster, an addition gauge pod on the dash and sati silver pedals.

It seems that in all of the statements made by Ford on the new Focus RS today, no model year and no actual arrival date was announced. I am guessing that it will be a 2016 model year vehicle, which would allow Ford plenty of time to get it out late in 2015 – but the automaker could focus (no pun intended) on the new Shelby Mustang, the Ford GT supercar and the new SVT Raptor F150 first. That might push the Focus RS back to the 2017 model year, but the important part is that at long last, the RS is finally coming the US dealerships.