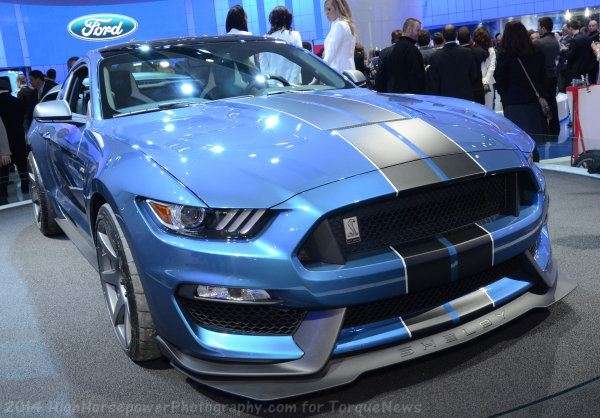 While the new Ford GT supercar stole the show this week in Detroit, the new Shelby GT350R has captured everyone’s attention in the muscle car world – with features designed to take down the Chevrolet Camaro Z/28 in the event that the GT350 isn’t enough.
Advertisement

The Ford Shelby GT350 Mustang rocked the muscle car world last year when it was introduced in Los Angeles, but within a week of meeting the GT350, there were rumors of a higher performance version being introduced at the Detroit Auto Show. The rumors indicated that the GT350R would dawn in Detroit with features that were far closed to those of the track-ready Camaro Z/28. It turns out that the vast majority of those rumors were correct and while the GT350 is dreamy – the GT350R takes that dreaminess to a whole new level.

The Ford Shelby GT350R Mustang Exterior
The Shelby GT350R Mustang is built to dominate a road course while still being capable of daily driving duties, so while Ford has made the “R” model a bit more extreme, they haven’t gone too crazy. Really, the look of the GT350R is very similar to the GT350 with a Shelby-specific hood, front fascia, rear fascia and vented fenders, but the addition of a much more significant front splitter, a large rear wing and carbon fiber wheels give the “R” a more aggressive look – and improved performance.

As you can imagine, the front splitter and the big rear wing help to greatly improve high speed downforce (while looking awesome) and the GT350R Mustang’s carbon fiber wheels help remove 13lbs from each corner. Those wheels are wrapped in Michelin Pilot Sport Cup 2 tires for ultimate grip under hard cornering.

The GT350R Working Components
In addition to the 5.2L flat plane V8 that is shared with the GT350, the GT350R has a revised suspension system that includes a specially tuned MagnaRide damper system, unique springs, unique anti-roll bars, a package specific alignment, new bushings and more. This retuned suspension setup allows the GT350R to sit an inch lower than the other new Shelby Mustang, while also affording it far more track-friendly handling capabilities. "The Shelby GT350R Mustang is a car with the nimbleness and power delivery you want on a road course," said Nair. "This isn't just about horsepower. The Shelby GT350R is an all-around balanced athlete – one that is extraordinarily precise and agile."

Weight Reduction is Key
While the new Shelby GT350 Mustang that debuted last year was a svelte muscle car, the new GT350R takes that to the next level. In addition to the ultra-lightweight carbon fiber wheels, the “R” package does away with the air conditioning system, the entire sound system, the rear seat, the contents of the trunk including the emergency tire inflator system, the carpeting and the exhaust resonators. In total, 130 pounds have been shaved from the GT350 and while it might seem odd to strip so many normal items from the new Mustang – this process was how General Motors made the Camaro Z/28 such a track beast. The Ford Shelby GT350R Mustang will arrive later this year and while we know that numbers will be limited, we don’t know how few will be built. We also don’t know how much it will cost, nor do we know how much power the flat plane V8 will make, but Ford has promised at least 500 horsepower and 400lb-ft of torque.

In the next few months, we are sure to learn more about the entire new Shelby Mustang lineup and when more information surfaces, you can be sure to find it here on TorqueNews.com.