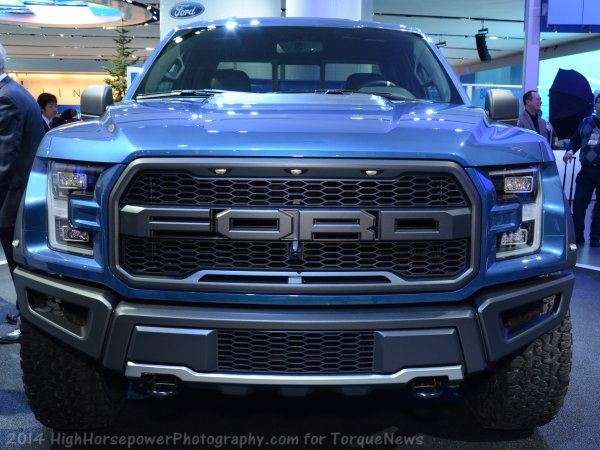 The New SVT Raptor F150 Looks as Awesome as I Expected

While the new Ford GT got the vast majority of media attention today at the start of the 2015 Detroit Auto Show, the new 2015 F150-based SVT Raptor debuted along with the new supercar and while I am a little surprised at Ford’s decision to go with a V6 engine – I am not surprised at how freakin’ awesome the new Raptor looks inside and out.
Advertisement

The Ford F150 SVT Raptor has built a reputation for being the most off-road capable factory pickup on the market today and when Ford rolled out the new lightweight 2015 F150, it seemed like this new half ton pickup would make one great Raptor. Today, the SVT Raptor F150 was introduced at the 2015 North American International Auto Show and while the high output EcoBoost V6 came as a bit of a surprise, the athletic, muscular physical appearance of this purpose built F150 makes for one great looking sport truck.

Unfortunately, Ford hasn’t rolled out the full details for the next generation Ford F150 SVT Raptor, but we have enough details that when combined with the exterior design, I am already a little bit in love with this new F150 Raptor.

The 2017 F150 Raptor – What We Know
The details on this gorgeous new Raptor F150 are limited, but we do have a handful of vital details that are just enough to get us all up on the edge of our seats.

First of all, this new SVT Raptor is expected to arrive late in 2016, presumably as a 2017 model year vehicle so until I know differently, I will refer to it as the 2017 Raptor.

Next, we know that the 2017 Ford SVT Raptor F150 will have a revised version of the 3.5L EcoBoost V6 and while we don’t know the exact output, Ford promises that it will pack more power than the previous generation Raptor. The “old” Raptor used a 6.2L V8 to produce 411 horsepower and 434lb-ft of torque so the 2017 Raptor will offer at least that. Considering that the 2015 Lincoln Navigator’s EcoBoost V6 produces 380 horsepower and 460lb-ft of torque, it shouldn’t take too much work for Ford to ease those numbers up past 411 and 434. Finally, we know that the 2017 Ford F150 Raptor will weigh at least 500lbs less than the previous SVT F150, it will have an even more advanced suspension setup from Fox and it will use a high tech transfer case setup that combines the advantages of four wheel drive and all-wheel drive. Also, the 2017 Raptor will use a new Terrain Management System that should make this half ton truck even better in every situation – on road and off.

I Love the Look of the New Raptor
The 2017 Ford F150 Raptor is really exactly what I would have expected. If I could have had a skilled automotive artist pen a new Raptor, it would have looked pretty much identical to the truck shown here. It is a perfect marriage of the previous generation Raptor exterior and the look of the 2015 F150, resulting on a purpose built off road truck that should easily continue the success of the half ton SVT pickup. Up front, the 2017 F150 Raptor wears a vented hood and a unique black grille with “FORD” proudly sprawled across the center and, like the previous generation, this new Raptor has the marker lights in the grille. Below that big, bold grille is a unique styled front bumper that allows for tight approach angles with corners that taper up at the edges. Also like the “old” Raptor, the 2017 SVT F150 has wider front fenders and rear bedsides with contrasting wheel opening flares, vents at the rear edge of the front fenders, unique wheels and Raptor decals on the bedsides. The stance is as high riding as you would expect thanks to the Fox suspension.

Finally, the back end of the 2016 Ford F150 SVT Raptor is upfitted with a tailgate face with what might be the biggest Ford logo to ever grace the F Series lineup, with sporty F150 and Raptor badges on the large matte black tailgate. The Raptor also has a rear bumper that is trimmed up to increase clearance out back and dual exhaust. Of course, the 2017 Raptor has the awesome LED trimmed headlights and taillights that are present on the 2015 F150 lineup so while this truck is clearly a Raptor – it is also clearly based on the 2015 F150.

Click any thumbnail above for a closer look at the 2017 Ford F150 SVT Raptor!