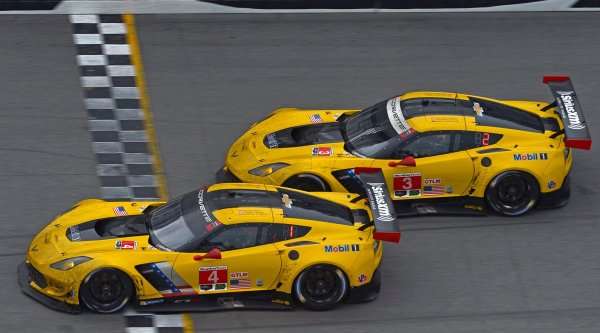 The Corvette Racing team came into the 2016 Rolex 24 at Daytona International Speedway with the hopes of taking home a second straight win in the GT LeMans class and in the end, the 24 hour race couldn’t have gone any better for the C7R teams – finishing 1-2 in the class and 7-8 overall in a thrilling last lap shootout.
Advertisement

While some people might not understand the allure of a race like the Rolex 24 at Daytona, this 24 hour long endurance race is a true test of both man and machine. Competing at this level for 24 hours takes its toll on the car and as a result, the crews behind those cars are left to quickly address any issues for 24 straight hours. Finally, the group of drivers tasked with driving these endurance cars are forced to sleep as much as they can when taking a break from the action over the course of the better part of 2 days.

As you can imagine, pulling everything together to win a race like the Rolex 24 is a tough task, but putting together back-to-back wins is what makes legends in the racing world – and that is why Corvette Racing is one of the most legendary names in the world of American endurance racing. Although the two Corvette Racing teams had a rough run at the Roar Before the 24, these teams hit the track this past weekend and showed everyone that they are the class of the GT LeMans group for 2016.

Corvette is the Early Favorite
The Chevrolet Corvette C7R team cars of Corvette Racing (#3 and #4) returned for the 2016 racing season with some tweaks to the car and a pair of new drivers – one in each camp. The #3 Corvette that won the 2015 Rolex 24 was back with Jan Magnusson and Antonio Garcia on the driver roster, but Ryan Briscoe was gone from the 2015 roster, replaced by Mike Rockenfeller. The #4 Corvette which finished 3rd at the 2015 race returned with Oliver Gavin and Tommy Milner, while Simon Pagenaud was replaced by Marcel Fassler.

For those not keeping track at home, Rockenfeller was a driver of the #90 Corvette Daytona Prototype that finished 4th (in class and overall) at the 2015 Rolex 24. Padenaud moved over to the #31 Action Express Corvette DP for this year’s event while Ryan Briscoe joined Richard Westbrook (another former Corvette Racing driver) in the new Ford GT from Chip Ganassi Racing.

Those guys probably wish that they had stayed with Corvette Racing, as both of the new Ford GT race cars struggled – finishing 7th and 9th in the 11 car GTLM field (31st and 38th overall).

Corvette Leads the Way
While the troubles with the new Ford GT race cars prevented the exciting head-to-head battle of American supercars at the Rolex 24, we did get to see a great battle between the two Corvette teams throughout the course of the 24 hour event. While some Porsche, Ferrari and BMW teams would climb into the lead from time to time, the #3 and #4 Corvette proved to be the top dogs in the GT LeMans class and in the final laps – it came down to a two car race.

After more than 24 hours of racing and more than 2,566 miles by each car, the Rolex 24 GTLM class would come down to a one lap shootout between the two Corvette Racing team cars. Oliver Gavin held the lead in the #4 Corvette but Antonio Garcia and the #3 Corvette were on top of Gavin at every turn – working through the lap traffic as the two Chevys tackled the final 3.56 mile lap. In the end, it would come down to a drag race to the finish line – with the #4 Corvette holding on to win by just 0.034 seconds.

That is the closest class win in the history of the 24 Hours of Daytona race and while the #3 Corvette couldn’t get the back-to-back win, the Corvette Racing program got the repeat win while also claiming two podium spots two years in a row.

For those who didn’t see the final few laps of the 2016 Rolex 24 at Daytona, the video below shows the in-car view from Antonia Garcia’s #3 Corvette as he desperately worked to get around his teammate. In the end, he would come up a few feet short – but it was still a perfect weekend for the Corvette Racing team.