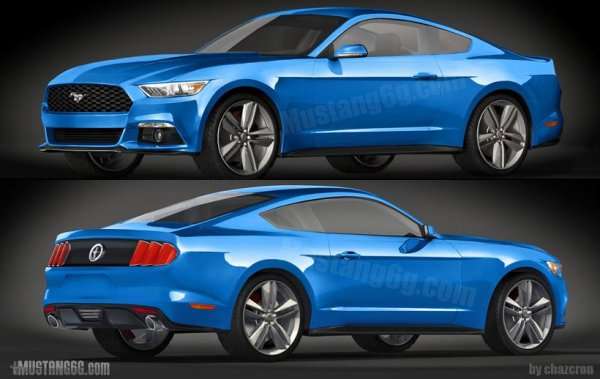 Check Out the Latest and Best 2015 Ford Mustang Renderings

Each time a new spyshot or bit of information on the 2015 Ford Mustang hits the web, artists who specialize in computer generated renderings head back to their electronic drawing boards to create what they believe we can expect from the next generation Mustang and today we have what very well may be the closest thing that we have seen to “real life” thus far.
Advertisement

Update: The 2015 Ford Mustang Will Debut on December 5th - but where?

As has been the case with most of the high quality renderings we have seen of the 2015 Ford Mustang, this newest bit of automotive artwork comes from the folks at Mustang6g.com. This latest rendering is executed beautifully by chazcron; the same skilled artisan who has provided us with previous renderings that have gotten our engines running but this time chazcron has offered up the next generation Mustang from the front and rear and in two different colors – blue and red. Ive consolidated two of his images into one for easier viewing but you can click here for a look at the red 2015 Mustang at Mustang6g.com.

This newest rendering of the 2015 Ford Mustang really doesn’t show us anything that we haven’t seen before from other renderings or in spy photos but this new collection of 2015 Mustang images serve as the cleanest and most realistic looking that we have seen thus far. The overall form of the 2015 Mustang shown here appears to be very similar to the current generation Mustang but the S550 rendering has a tail end with a shorter trunk lid and a look that is very similar to the fastback Mustangs from 1967. It is still not a fastback by the traditional definition as there is a flattened trunk area between the back glass and the rear face of the Mustang but it as close as we have seen to a fastback Mustang in many, many moons.

The rear face of the 2015 Ford Mustang rendering has a familiar three-piece taillight design with an elevated, angled look that makes it unique from the current generation without departing too far from the lighting look that we are all accustomed to on the mighty Mustang. Along the bottom, the 2015 Mustang could have an integrated diffuser with the dual exhaust outlets poking through the outer corners.

The front end shot shows an 2015 Ford Mustang face that has become almost familiar with the many spyshots and renderings showing the Evos-based nose that will surely spur some controversy provided that the production Mustang actually looks like this. Since the first bits of speculation that the next generation Mustang would have the same Evos styling language as other models in the current Ford lineup, skeptics complained that a Mustang that looks like a Fusion would not do. However, now that we are seeing such clear renderings of the 2015 Mustang, the front end layout isnt all that different from the current models shy of the elongated headlights. When you add in the very production friendly looking fog light housings mounted in the lower corner of the front fascia, the large dual-opening grille and the subtle chin spoiler – this 2015 Mustang rendering truly looks like something that could have been issued by Ford Motor Company.

Of course, there are still skeptics who believe that this Evos-based 2015 Ford Mustang is nothing but a ploy – a decoy to draw attention away from the actual front end of the next generation Mustang. Ive spoken to a few people who believe that Ford has literally built a few front ends and put together some fake spyshots that lead everyone to expect the Fusion-like front end but when the 2015 Mustang debuts next year, the actual product will look nothing like what we have seen in renderings and spyshots. Even though automakers go to great lengths to keep new models out of the public eye until they are formally introduced, I have a hard time buying the idea that a company as busy as Ford would go to so much trouble to throw everyone off.

Unfortunately, with the actual debut of the 2015 Ford Mustang not expected to debut until April 2014, it could be months before we find out what the real thing will look like and between now and then – we are almost certain to see more renderings and spyshots of the S550 Mustang before we meet the real car.

LG's New EV Battery Plant Is a Welcome News for Tesla
Tesla Giga Berlin's New Hurdle: It's Not Only the Gov't, but Now Tesla Itself
END_OF_DOCUMENT_TOKEN_TO_BE_REPLACED