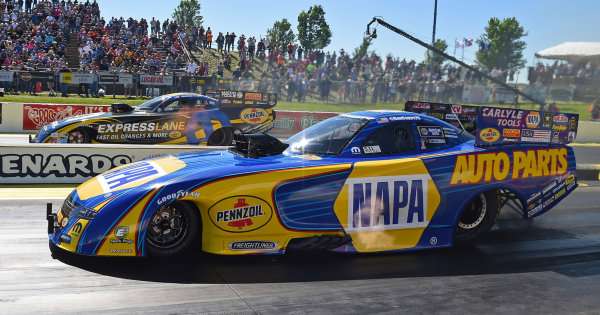 The incredible dominance of Don Schumacher Racing over the NHRA funny car class continued this weekend at the Menards NHRA Heartland Nationals presented by Minties in Topeka, Kansas, with Ron Capps driving his Dodge Charger funny car to his 4th straight win. Capps’ 4th win of the season is the 7th win of the year for the Don Schumacher funny cars in just 8 events and at the Heartland Nationals, DSR Chargers claimed 3 of the 4 spots in the semifinal round.

Oh, and Matt Hagan set another world record with his Dodge Charger funny car, running a 3.802 and 338.85 miles per hour – setting the records for the quickest ET and the fastest trap speed by an NHRA funny car.

Heartland Nationals Qualifying
As they have done so often this season (and over the course of the past few seasons), the Don Schumacher Racing Dodge Charger funny car teams came out of the trailers flying. Robert Hight and his John Force Racing Camaro ran the quickest time of round #1 with a 3.826, but Ron Capps was a close second with a 3.870, Matt Hagan was third quickest with a 3.885 and Jack Beckman was fourth with a 3.899. Cruz Pedregon with fifth with a 3.922 and Tommy Johnson Jr in his Charger was sixth with a time of 3.990.

The fast times at Topeka continued during qualifying round #2. In fact, some of the quickest times in the modern era of the NHRA funny car class were laid down, starting with Courtney Force running a 3.815 at 335.23 miles per hour in her JFR Camaro. That 3.815 was the quickest ET since the NHRA went to the 1000-foot track (rather than the full quarter mile), but the record wouldn’t last long.

Later in the 2nd round, Matt Hagan and his Dodge Charger ran a 3.802 at 338.85 miles per hour. That is the lowest ET and the highest trap speed of any funny car during the 1000-foot era. That put Hagan in the top spot in his Charger while Courtney Force was close behind in her Camaro.

Hagan would back that record run up in the third round with a 3.806 at 335.98 against Courtney Force, who smoked the tires just after the start. After the rest of the Don Schumacher and John Force Racing drivers turned strong numbers in the second and third round of qualifying, the ladder for eliminations had all three Force cars and all four Schumacher cars filling the top seven spots.

Eliminations
In the first round of eliminations for the Heartland Nationals, 3 of the 4 DSR Dodge Charger funny cars got the win light, when Matt Hagan knocked off Jack Wyatt, Jack Beckman beat Chad Head and Ron Capps beat Cruz Pedregon; although Tommy Johnson Jr lost to Del Worsham. Over in the John Force Racing camp, the first round went just about as well, with Courtney Force beating Tim Wilkerson and Robert Hight beat Dale Creasy, but John Force lost to Bob Tasca III. Courtney Force and Robert Hight turned the quickest ETs of funny car round #1.

In elimination round #2, Robert Hight got revenge for his boss and beat Tasca, but teammate Courtney Force lost to Ron Capps. On the other side of the ladder, Jack Beckman beat Del Worsham and Matt Hagan beat JR Todd. Ron Capps made the quickest run of this round with a 3.866.

In the semifinals, Matt Hagan took on teammate Jack Beckman and Ron Capps took on Robert Hight in a great Dodge-Chevy battle. In that Schumacher-Force team battle, Hight had the starting line advantage, but he ran into issues and Capps raced to the easy win with a 3.908 while in the Mopar-VS-Mopar battle, Matt Hagan turned a starting line advantage into an easy win when Beckman ran into issues around half track.

The Finals
In the final round of the Heartland Nationals, the Don Schumacher Racing Dodge Charger of Matt Hagan took on the Don Schumacher Racing Dodge Charger of Ron Capps. Hagan opened the 2017 season with back to back wins while also claiming the record for the quickest and fastest funny car run of the modern era in qualifying. Capps was routinely one of the quickest cars in the field throughout the event and he came in with 3-straight wins. It was a clash of teammate titans and it proved to be a dandy of a drag race.

Season Standings
With another dominating event, the Don Schumacher cars have pulled out to an even bigger lead in the championship run. As you can see in the list below, the Don Schumacher drivers are 1st, 2nd, 5th and 7th while the John Force Racing drivers are 3rd, 4th and 6th. However, the duo of Capps and Hagan have put a big gap between themselves and the first Camaro in 3rd place.