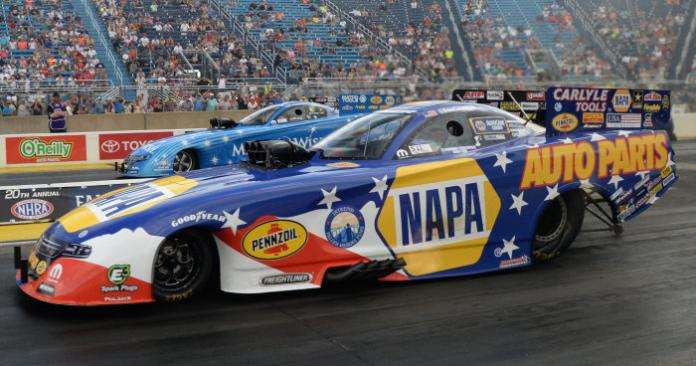 This past weekend, Ron Capps and his Dodge Charger took the Funny Car class win at the Fallen Patriots NHRA Route 66 Nationals, giving Don Schumacher Racing their 10th-straight funny car win while the Chevrolet Camaro-driving rivals from John Force Racing all lost in the 1st round.
Advertisement

At the beginning of the 2017 NHRA drag racing season, there was a stiff rivalry brewing between the Dodge Charger teams of Don Schumacher Racing and the Chevrolet Camaro teams of John Force Racing.

This past weekend, Ron Capps drove his NAPA Dodge Charger to victory for the 6th time this season, giving Don Schumacher Racing its 10th straight event win and its 12th win in the first 13 races of the season. Meanwhile, all of the John Force Racing Camaro funny cars lost in the 1st round, all but closing the book on this rivalry-turned-total domination.

Qualifying
Qualifying for the Fallen Patriots NHRA Route 66 Nationals in Joliet, Illinois started off fast, with 8 of the 17 cars entered for the Funny Car class running in the 3-second range. As has often been the case, a John Force Camaro was the quickest car in the 1st round of qualifying, with Robert Hight grabbing the top spot while John Force came in 2nd. Matt Hagan was 3rd quickest and Jack Beckman was 4th quickest in round #1. Ron Capps sat 7th after round 1, while Courtney Force turned in a poor run to sit 11th and Tommy Johnson Jr settled for 13th.

In the 2nd round of qualifying, Robert Hight turned a quicker time to hold onto the top spot, but there was a big scramble behind him. Beckman drove his Charger into the 2nd spot, Courtney Force moved into 3rd and Matt Hagan went quicker than his 1st run to take the 4th spot in a very quick round #2.

In fact, qualifying round #2 for the Fallen Patriots NHRA Route 66 Nationals was so quick that the top of the ladder remained relatively unchanged through the 3rd and 4th rounds of qualifying, so while the drivers mixed it up for the lower spots – the top 7 spots didn’t change after round #2. The only real change in the top half of the funny car ladder was Jonnie Lindberg and Ron Capps swapping spots in the final qualifying run, pushing Capps’ Charger into the bottom half of the group.

Eliminations
In the 1st round of eliminations, all 4 of the Don Schumacher Racing Dodge Charger funny cars won, with Capps beating Lindberg, Hagan beating Del Worsham, Beckman beat Bob Bode and Tommy Johnson Jr beat John Force. On the other hand, all 3 of the John Force Racing Chevrolet Camaro funny cars lost in the 1st round, with the boss losing to Tommy Johnson Jr while Courtney lost to JD Todd and top qualifier Robert Hight lost to #16 qualifier Jim Campbell.

In the 2nd round, Capps made short work of Campbell, Hagan (quickest time of the round) beat DeJoria and Tommy Johnson Jr beat JR Todd while Tim Wilkerson and his Ford Mustang beat Fast Jack Beckman. This set up a semifinal round with 3 DSR Dodge Chargers and the lone Ford Mustang.

In a clash of the championship frontrunners, Ron Capps beat Matt Hagan in a tight race while Tommy Johnson Jr cruised to victory against Tim Wilkerson – setting up the 7th funny car final round of 2017 with 2 DSR Chargers battling for the win.

In the finals, Tommy Johnson Jr slept at the tree, giving Capps a healthy head start and he never looked back – driving his NAPA Dodge Charger to victory for the 6th time this season in 13 races.

Championship Standings
After the 1st 13 races of the 2017 season, Ron Capps has pulled out to a huge lead over the rest of the Funny Car class, with teammates Matt Hagan and Jack Beckman 186 and 294 points back. Robert Hight sits 4th, 355 points out of the top spot and Tommy Johnson Jr rounds out the top 5, 375 points behind Capps.

The next event for the NHRA Funny Cars is the Mopar Mile High Nationals in Colorado, where the Don Schumacher Chargers have to be looking to win their title event.