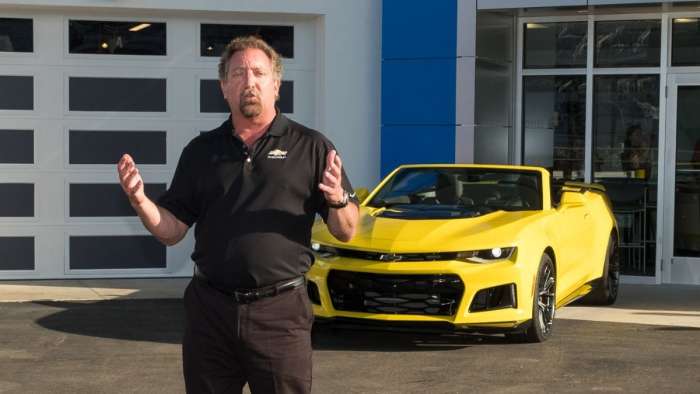 Perhaps the most shocking move by General Motors last week was reassigning Camaro chief engineer Al Oppenheiser to the company’s electric vehicle program, taking him away from the muscle car program that he has led since the Camaro returned for 2010.
Advertisement

Since the Chevrolet Camaro returned late in 2009 for the 2010 model year, Al Oppenheiser has been the man in charge of the program. Under his watch, the Chevy muscle car stormed back onto the scene, leading the segment in sales every year from 2010 through 2014, while also offering up some of the greatest American performance cars ever. Of course, Oppenheiser was a very public leader of the Camaro program, attending enthusiast events and participating in track record efforts.

Unfortunately, the 6th generation Camaro hasn’t proven to be as successful as the 5th generation and with sales slumping, General Motors appears to be looking to shake up the program a bit. The automaker has moved Oppenheiser to the electric vehicle program, where he will oversee the future of the company’s EVs while Mark Dickens, current executive director of Performance Variants, Parts, Accessories, and Motorsports Engineering will take over the Camaro program.

This comes as a shock to many people, as Oppenheiser has played such a huge role in the modern era of the Camaro. Really, there are few names in the modern American auto industry which are more closely associated with the vehicle on which they work than Al Oppenheiser and the Camaro, but the leader of the modern muscle car program is off to develop EVs while the Camaro soldiers on without him.

Electric Vehicle Push
There is no question that General Motors is looking to bolster their electric vehicle program, with GM spokesperson Michael Albano telling Car and Driver that the company wants their best people working on EVs. In other words, GM is approaching this as promoting Oppenheiser to head a bigger program and it is a bigger role, but you have to wonder if he would have been taken away from the Camaro program if the Chevy muscle car was selling better.

In any case, we have to wonder how the future of the Camaro looks without the man who led the way for the entire modern era of the car. While there are likely still plenty of the same people involved in the program and in the end, the Camaro will always be a modern muscle car, it will be interesting to see if there is any major change to the program with a new chief engineer.

Hopefully, a new person calling the shots in the Camaro program will breathe some new life into the muscle car while at the same time, having Oppenheiser in the EV program will lead to some electric vehicles that are more fun to drive than most of the current options in that segment.

Frank wrote on December 11, 2018 - 11:55am Permalink
They make it sound like he was demoted. I think it sounds like he was promoted and they’re likely planning to make an electric Camaro like the prototype they showed off recently.
DeanMcManis wrote on December 11, 2018 - 12:47pm Permalink
I think that it is a smart move to have someone with a passion for performance heading up EV production. Seeing that (outside of the Volt and Bolt) the biggest EV news lately from GM has been their EV Camaro concept, plus the news that they might offer a 545HP hybrid Camaro in the near future. So the connection between Oppenheiser and EVs might not be as big of a stretch as it first appears. With Tesla showing up supercars in acceleration, and getting a lot of good press over the capability of great performance AND economy, it would be very good for GM to add some EV excitement into their model lineup.
Luke wrote on December 11, 2018 - 1:09pm Permalink
An eCamaro would likely dominate the Model 3 in every aspect except charging speed, and probably be significantly less expensive.
Frank wrote on December 11, 2018 - 1:10pm Permalink
I'd hope that an eCamaro would outporform an M3. The intended competition for the M3 was the Toyota Camry, which is ironically, one of the few cars still out-selling the M3. Since none of the other manufacturers are putting any effort into EVs Tesla has somewhat accidentally kneecapped Mercedes, BMW, Porsche, Honda, and Toyota all at the same time. That should have been a wakeup call for all the other auto companies. When Tesla received 500k reservations for the M3, a car that was still 2 years away from delivery, their competitors should have had engineers retooling factories, establishing supply chains and designing fleets of EVs to compete. They should have had a blank check for overtime. There should have been battery factories under construction within 12 months of the premier of the M3 and new models promised within 6 months of the M3. Instead they ALL essentially rolled over and looked the other way. GM has kept a few toes in the water. VW talks a big talk, but hasn't produced anything to show for it at all yet. They have an eGolf that's essentially a watered down Nissan Leaf competitor.
Allen wrote on December 11, 2018 - 1:10pm Permalink
This is great news! Oppenheiser is a brilliant engineer and product manager. He's passionate and spends a lot of his time engaging with consumers and enthusiasts. If he thought Camaro owners were passionate, wait until he hangs out with us Volt and Bolt fans! Too bad there isn't anybody like Oppenheiser on the marketing side. Hey, that's an idea! Let him run the marketing for their new EV product line, too! He did more to promote Camaro's brand image than anyone in Camaro marketing/advertising ever did!
John Goreham wrote on December 11, 2018 - 3:00pm Permalink
GM is now walking the walk on EVs.
carl fiorletta wrote on December 21, 2018 - 9:15pm Permalink
At the age of 73, my next and maybe last car could very well be a BEV. The flat torque curve of an electric motor makes them fun to drive. A Tesla would be fun, an Oppenheiser BEV would be more so. I'll be watching for sure!