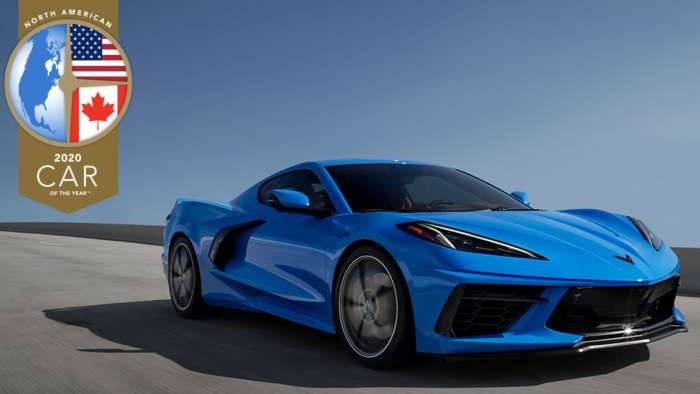 The jury for the North American Car, Truck and SUV of the Year awards announced the winners this morning in Detroit and the new mid-engine C8 Chevrolet Corvette took home the title for the top car – beating the Ford Mustang Shelby GT500 and 17 other impressive vehicles.
Advertisement

The 2020 model year is a big one in North America, with the Chevrolet Corvette, the Ford Mustang Shelby GT500, the Toyota Supra, the Porsche 911 and many other key models being offered in a new-to-market form. To some, the long awaited arrival of the mid-engine Corvette coupled with the glowing reviews from both the media and the public made the C8 a shoe-in, but with such stiff competition, it was not guaranteed.

However, it became official this morning that the new C8 Corvette Stingray is the 2020 North American Car of the Year. The Corvette’s title was announced at Detroit’s Cobo Hall, with the Jeep Gladiator taking Truck of the Year and the Kia Telluride taking SUV of the Year.

2020 North American Car of the Year Nominees
In total, the jury nominated 19 cars for the 2020 North American Car of the Year balloting. To be included, a vehicle must be new or substantially changed from the previous model year, the vehicle has to be on sale by the end of the year and it has to be a full production model. Back in August 2019, the entire list of nominees was announced, including some very big names in the performance car world.

So, in addition to the Chevrolet Corvette, the Ford Mustang Shelby GT500, the Porsche 911, the Toyota Supra and the BMW Z4, there were a handful of very popular, very important models on that list. Cars like the new BMW 3 Series, the Cadillac CT5 and the Mazda 3 are all sure to be hot sellers this year. 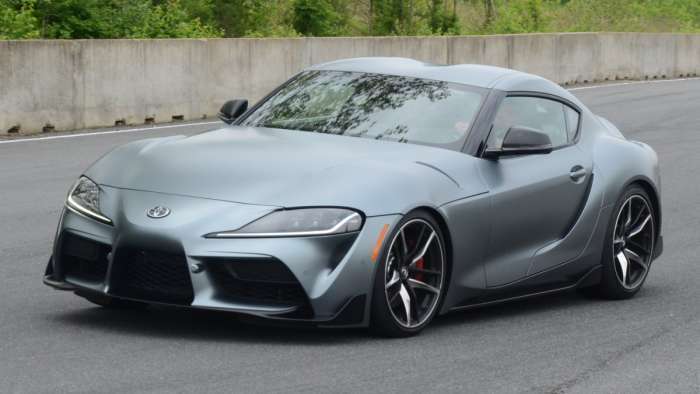 C8 Corvette Takes the Win
When the jury trimmed that longer list down to 12, the semifinalists were announced. At that point, the following models were still in the running.

The runners-up were the Hyundai Sonata and the Toyota Supra, so the jurors definitely leaned towards the sportier end of the spectrum for 2020 while giving a nod to the volume sedan segment as well.

See you in my next story where I am discussing how Dodge Challenger and Dodge Charger supercars are giving the drivers what they want.

Patrick Rall is a professional writer and photographer with a passion for all things automotive. Patrick has been sharing his automotive expertise in automotive journalism from Detroit for more than a decade covering the Big Three. Having grown up in his father’s performance shop, he spent extensive time at the oval track and drag strip – both driving and wrenching on various types of vehicles. In addition to working as a writer, Patrick previously worked as an automotive technician before moving on to a business office position with a chain of dealerships, and this broad spectrum of experience in the industry allows him to offer a unique look on the automotive world. Follow Patrick on Facebook, Youtube and Twitter. Find more of Patrick's stories at Torque News Corvette. Search Torque News Corvette for more Corvette coverage from our reporters.

DeanMcManis wrote on January 14, 2020 - 9:43pm Permalink
I am not at all surprised to see the new C8 Corvette win one of many best-of contests. As opposed to most all of the other contenders, they are mostly just an evolution of previous models, where the Corvette was a nearly clean slate reinvention of the car. For me the most impressive point is simply the price. They would have had thousands of buyers lining up to buy this mid-engined, exotic looking Corvette that hits 60MPH in under 3 seconds, even if they had been asking $120,000+ for the car, but with a starting price around $60K, this new Corvette has redefined performance value. Even the base model is not a gutted shell of a car, requiring tens of thousands to make it a stellar performer. And even though they were just judging this car on it's own merits, we have a good idea that this is the tip of the high performance iceburg, with an upcoming Z06 and maybe Zora, even higher performing models due over the next couple years. From the larger list I am also impressed with the new Shelby GT500, and the new Supra that many of us have been waiting decades to see reborn.