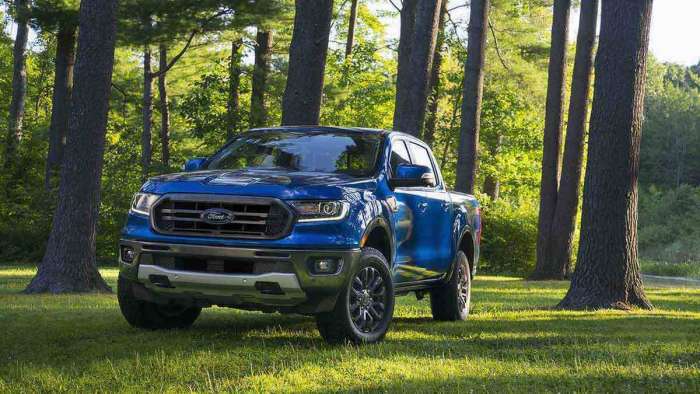 The Ford Ranger lacks pizzazz, off-road ability and wow factor when compared to the Jeep Gladiator. What it makes up for in fuel economy and price, it misses the boat in other areas.
Advertisement

I’m not a member of the jury that selects the winners, but I will say the jury got it right. The Gladiator was the clear-cut favorite to me over the other two finalists. Honestly, the Ranger should feel honored to have made the cut. And I honestly believe it got there because it was a new truck, but also a known name. What’s old is new again, and that usually resonates with automotive writers (who serve on the jury).

How Does the Ford Ranger Compare to the Jeep Gladiator?
This isn’t an apples to apples comparison at all. Both are considered small truck competitors, but honestly, I don’t perceive either truck attracting the same type of consumer. Realistically the Ranger competes more closely with the segment sales-leading Toyota Tacoma and the General Motors rivals of Chevrolet Colorado and GMC Canyon. Both of the GM models launched a couple years earlier than the Ranger, which relaunched after an 11-year hiatus as a 2019 model year.

As for the award-winning Gladiator, it had a much bigger wow factor than the Ranger. It’s hard to say why exactly, as many Ford enthusiasts were excited to hear about Ford bringing back the Ranger. But yet the Ranger’s debut and launch was rather uneventful, while the Gladiator was the star of the car show circuit and also received a lot of marketing push from FCA. There were commercials for the Gladiator, and while I’m sure there are commercials for Ranger, they weren’t memorable. So, Jeep won the publicity battle over the Ranger, hands down.

The Ranger has the efficient 2.3-liter Ecoboost engine that generates 270 horsepower (See Ford 1.0-liter EcoBoost engine shown to TorqueNews as a 123 HP cup holder). Meanwhile the Gladiator has a 3.6-liter V6 engine that edges out the Ranger with an output of 285 hp. The transmissions in both trucks are outstanding. The Ranger’s 10-speed automatic is smooth and outstanding, but so is the 8-speed transmission in the Gladiator. However, the smaller displacement engine of the Ranger optimizes the fuel efficiency with a maximum EPA rating of 21 city and 26 highway. Meanwhile, the Gladiator has an EPA rating of 17 mpg/city and 22 mpg/highway. This old-school type of fuel economy shows that Ford dominates as it relates to fuel efficiency. 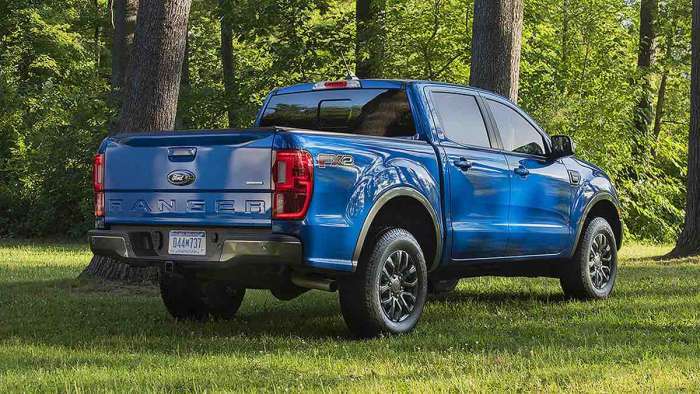 The almighty dollar rules and the Ranger blows the Gladiator away when it comes to affordability. Jeep is generally overpriced because of the name recognition and frankly the demand. But the Gladiator has prices that start around $40,000 while top-of-the-line Gladiators can surge over $60,000. Meanwhile a basic Ranger starts in the mid $20s and can go up to $40,000. Comparing the interiors is again not an apples to apples comparison, but generally the Gladiator will appeal to die-hard Jeep fans but might turn off others who are new to the Jeep brand. Although the interior of the Ranger isn’t as nice as I had hoped and can’t compare to the more lavish appointment of the F-150.

How Can Ford Improve on The Ranger?
I drove the 2019 Ranger and was underwhelmed. There was no wow factor. It wasn’t memorable. The looks were fine, but it didn’t have enough distinction. It just looked like a slightly smaller F-150. Meanwhile the Gladiator had all the wow factor and was quite memorable. So that’s one thing the Ranger has working against it and is an area Ford needs to focus on. I think they felt just simply bringing back an updated Ranger was enough to satisfy, but I believe Ford misunderstood the competitive zest of this segment.

Also, while the Ecoboost engine is fantastic and I would expect nothing less than for Ford to put a 4-cylinder engine in this smaller truck, I think there would be more appeal if there were another engine option. Dare I dream of a Raptor-type of performance Ranger? I would be really interested in such a truck.

Lastly, and this might be the most important area to improve when compared to the Gladiator. But the Ranger lacks a truly off-road, rugged trim. There is the FX4 trim package that adds a rugged vibe to the Ranger. However, Tacoma has the TRD and that really helps improve their sales and their fan base. Of course the Jeep brand is known as an off-road warrior. But the Ranger lacks anything that can truly take a pounding on mountain roads through mud or over a creek bed. The Raptor is the truck to turn to for that, and certainly the new Bronco will take care of that as well. Perhaps Ford is afraid to interfere with that niche segment and don’t want to cannibalize the future Bronco segment by offering an off-road Ranger. Either way, I think Ford misses an opportunity in this regard to go toe-to-toe with the Gladiator. And for these reasons, the jury got it right when it chose the Gladiator over the Ranger for Truck of the Year.

See you in my next story discussing how the FX2 and FX4 packages make Ford Ranger off-road ready. Also, check this news coverage discussing which engine is better for Ford F-15-: Ecoboost vs Coyote.

Jimmy Dinsmore has been an automotive journalist for more than a decade and been a writer since the high school. His Driver’s Side column features new car reviews and runs in several newspapers throughout the country. In addition to being a nationally syndicated automotive columnist, Jimmy has been published in a compilation book about children growing up with disabilities, where he shared his own very personal experience. He is also co-author of the book “Mustang by Design” and “Ford Trucks: A Unique Look at the Technical History of America’s Most Popular Truck”. Also, Jimmy works in the social media marketing world for a Canadian automotive training aid manufacturing company. Follow Jimmy on Facebook, Twitter and LinkedIn. You can follow most of Jimmy's stories at Torque News Ford coverage. Check back again and search for Torque News Ford Ranger for more Ranger reporting from Torque News.