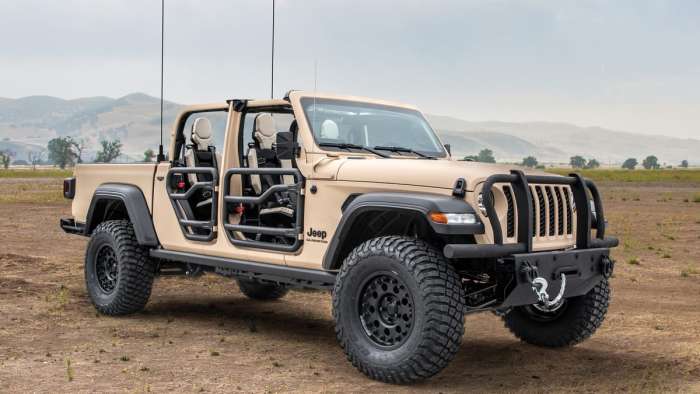 See Why the Military Wants the Most Extreme 2020 Jeep Gladiator

Jeep and a manufacturer of military vehicles unveiled an extreme version of the all-new 2020 Jeep Gladiator. See why they believe this off road warrior will be perfect for the military.
Advertisement

AM General specializes in building light-weight military tactical vehicles. They are teaming up with Jeep for the XMT concept. The two companies have worked together before, dating all the way back to World War II.

“We are extremely excited to partner with FCA and introduce the Jeep Gladiator Extreme Military-Grade Truck at AUSA,” said AM General President and CEO Andy Hove. “This new venture gives us an opportunity to showcase our expertise in light tactical vehicles and help FCA maximize the Gladiator’s global reach and potentially enter new military markets.”

The 2020 Jeep Gladiator appears to be perfect for the job. The midsize truck has 7,650 pounds of towing capacity and can carry up to 1,600 pounds of cargo. The Jeep Gladiator XMT could be very agile getting into and out of war-torn areas.

AM General has been outfitting military vehicles for decades. It has developed a number of accessories that can improve a vehicles’ off-road maneuverability and ability to stay out in the field for extended periods without the need for frequent maintenance. The company also specializes in equipment to improve top secret communications. The company claims to have produced over 300,000 vehicles for use in 70 countries.

According to AM General, the Jeep Gladiator XMT has been upfitted “with both custom-built and commercially available military-grade parts to create an even more rugged truck that can traverse the toughest of terrains in adverse conditions and is ready to meet varied military customer requirements.”

AM General is perhaps best known for its work upfitting the Humvee for military missions around the world. Similarly, AM General could transform the Jeep Gladiator XMT into a personnel transport or a command and control truck. AM General says that production could begin in the second half of 2020 depending on the amount of demand.