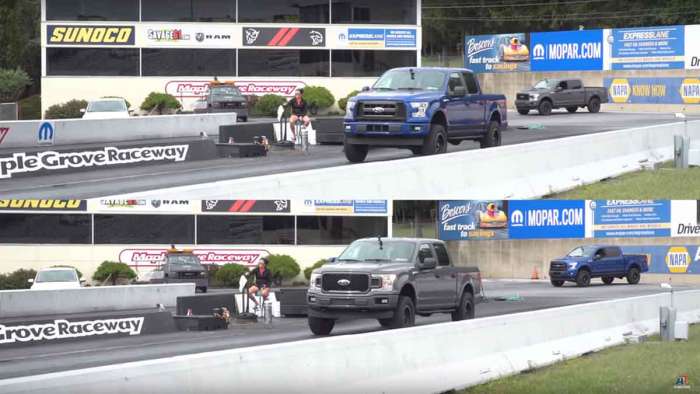 One truck enthusiast tested Ford F-150 Ecoboost vs Coyote V8 engines trying to find out which engine performs better. The results of the test on the track and on a dyno are discussed in this story.
Advertisement

There is no replacement for displacement. In the ongoing saga of Ecoboost vs. V8, one truck enthusiast put both engines to test on the track and on a dyno. The question is, which engine outperforms the other in this Ecoboost vs. Coyote throwdown.

It’s exhausting hearing the old-schoolers demanding V8 power in trucks (and muscle cars for that matter) and poopooing Ecoboost technology. That way of thinking gets proven obsolete when Justin Dugan of the YouTube Video Series American Trucks’ (AT) The Haul tests two similarly equipped Ford F150 SuperCrew’s, pulling them into the AT studio for a dyno battle, both stock and tuned, before heading to the drag strip for a head-to-head battle.

To keep the playing field level, both trucks feature the 10R80 10-speed automatic transmissions, 33” tires and 3.55 rear end gears. The Lightning Blue 2017 XL features the latest iteration of the 3.5L V6 Ecoboost engine while the Lead Foot Gray 2018 STX features the latest version of the 5.0L V-8 (Coyote). The output numbers for the 3.5-liter Ecoboost engine are 375 horsepower and 470 lb.-ft. of torque. Meanwhile the V8 (Coyote) engine has 395 horsepower and 400 lb.-ft. of torque.

This is an interesting test and might settle the debate once and for all about how important is engine displacement. With a goal of seeing which tuned F150 performs better, Justin hits AT’s in-house dyno to measure stock power output for both trucks before uploading respective 93 octane Bama tunes with SCT’s SF4/X4Power Flash tuner to measure both peak and curve power gains. After the dyno session, Justin takes both trucks to Maple Grove Raceway in Mohnton, PA for both stock and tuned drag runs to see which engine performs better in the quarter mile. Ecoboost or V8; which one do you think will perform the best on just a tune and nothing else?

Ecoboost vs. Coyote: Dyno Tested
Justin strapped both trucks onto their dyno and ran it in fifth gear. Both were run as stock, without a tune and then later as a tune. The Ecoboost’s baseline (stock) run yielded 321 hp and 370 lb.-ft. After the tune, the Ecoboost some power gains with 373 hp and 403 lb.-ft. of torque.

The V8 had a baseline run of 351 hp and 391 lb.-ft. of torque and then saw power gains as well after the tune with 366 hp and 355 lb.-ft. of torque. The conclusion is that the tune on the Ecoboost saw way more impressive gains, but that’s to be expected with a turbo. 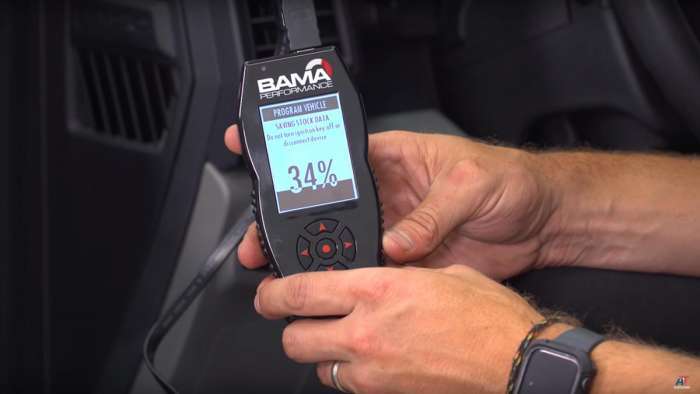 Ecoboost vs. Coyote: Track Tested
After the dyno testing, Justin took the same trucks to the track to test its quarter mile speeds. The Ecoboost was launched in four high (no burnout) and had a time of 14.85 at 93 mph without any tuning. After getting the tune, it did better off the line and saw improvement with a time of 14.35 at 95 mph.

The conclusion is pretty clear. The overall horsepower figures were a push but the gain in torque goes to the Ecoboost. This isn’t surprising, but what was impressive was after the tune how it more benefited the Ecoboost than the V8. While the Coyote saw gains, the Ecoboost did outperform it altogether. Does this settle the debate? Probably not. Each truck will have their preference. But what is evident from this test is the outstanding performance options that exist for the Ford F-150.

See you in my next story where I am discussing what happened to the legendary Little Red 1967 Shelby Mustang, its renovation and going to Barrett-Jackson for auction.

Tsingshan's Threat to Tesla: EV Maker Is In Battery Crosshairs
Tesla-Funded Research Reveals One of The Biggest Mysteries of EV Battery
END_OF_DOCUMENT_TOKEN_TO_BE_REPLACED