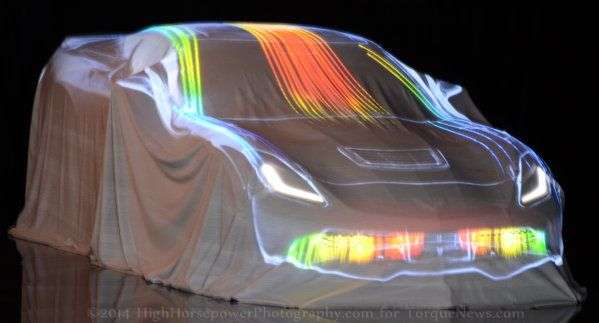 The current Chevrolet Corvette Stingray offers performance that allows it to compete with some of the best sports cars in the world while the 2015 Corvette Z06 will allow the bowtie clad sports car to beat many of the best supercars in the known universe – all for tens (if not hundreds) of thousands less.

Chevrolet dealerships are selling new Corvettes faster than the automaker can build them and that shouldn’t come as a surprise with the C7 being the most powerful and the most efficient generation of the Corvette. Even with all of that in mind, General Motors is reportedly already working on the 8th generation of the Corvette as the C7 nears its second model year of production.

Nothing is known about the 8th generation Chevrolet Corvette, but word on the street is that a hybrid assist system – at least as an option – is not currently out of the question. While it seems absurd that the ultimate American sports car would pack a hybrid assist system behind the familiar American V8, the increasing number of ultra high performance hybrid systems makes me think otherwise.

Consider that the McLaren P1, the Porsche 918 and LaFerrari are among the best performing cars in the world and they are all sporting some variation of an electrical hybrid assist system. Porsche and Ferrari are easily among the most respected high performance automakers in the world and while McLaren is a bit of a dark horse with their low production rates – these are arguably three of the most impressive supercars in the modern era because not only are they incredibly fast in any venue but they are also surprisingly efficient as supercars go.

Sure, the Corvette purists who spend their post-retirement days sitting around, complaining about how things are always changing for the worst will wretch at the idea of a hybrid C8 Corvette. Those same folks were disgusted at the fact that the C7 Stingray doesn’t have round taillights, but with Corvette sales booming it is pretty clear that GM isnt all that worried about the select few critics of a hybrid Corvette.

The key issue with the McLaren P1, the Porsche 918 and LaFerrari is that to get that crazy performance with standard hybrid assist you have to pay serious money. LaFerrari starts at $1.4 million, the McLaren P1 starts at $1.15 million and the Porsche 918 is the bargain of the group with a starting price of “only” $845,000. These cars are all a great deal faster in every way than the Corvette Stingray, but the Corvette Z06 might give these cars at least a run for their money on the right track and it could do so with a price that will likely start in the range of $125,000 while the Corvette Stingray starts in the $50k range.

Based on those prices, GM could comfortably add a 15 or 20k to the price and still undercut those hybrid hypercars by a bundle.

Best of all, we should keep in mind that General Motors offers the Chevrolet Volt – one of America’s bestselling electric cars – so it is clear that the GM engineers know a thing or two about the world of electric propulsion systems. If GM could find a way to harness the power of the Corvette and combine it with some derivation of the Voltec drivetrain that uses the electric drive as an assist system rather than the main drive system, a hybrid Corvette could be a real beast. Not only would the Volt’s adapted electrical system allow C8 Corvette owners to get around on pure electric power while also getting better fuel economy through the assist of the electric system when the gasoline engine is running, but this electric assist system would improve performance. The key advantage of electric propulsion systems is that they make instant torque where gasoline engines have to “rev up” to make big power.

Because of this, introducing a high performance hybrid assist system to the C8 Corvette would give it leaps and bounds more low end torque from the electric portions of the drivetrain while the powerful V8 would take care of things through the mid range and top end.

Considering that the last two generations of the Chevrolet Corvette (C5 and 6) lasted 8 and 9 models years respectively, we would expect to see the C8 Corvette arrive somewhere around 2022 for the 2023 model year. That might seem like a long time off, but the fact that GM is already working on the next generation Corvette shows that in the grand scheme of things – the next Corvette is right around the corner.

Parks McCants wrote on June 3, 2014 - 1:35am Permalink
You've caught my attention Patrick with the Hybrid idea. It could take Corvette performance to the next level without breaking the bank. This will be interesting. Thanks for the informative read.