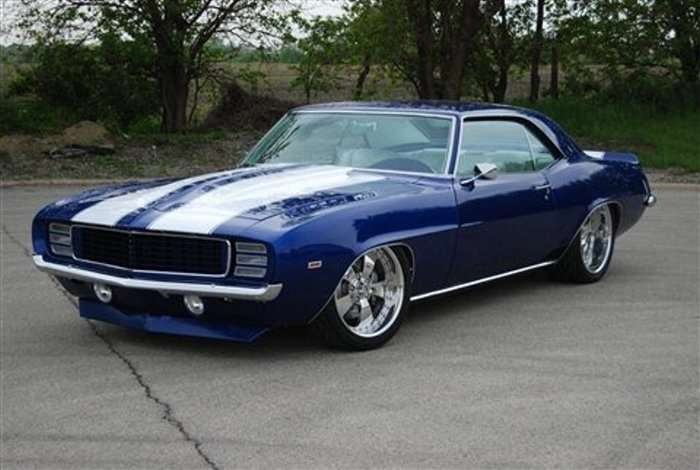 August Camaro of the Month: Greg Dunkin's 1969 with LS9 Power

The TorqueNews/Camaros Unlimited Camaro of the Month for August 2018 is the LS9-powered 1969 Chevrolet Camaro shown above, owned by Gregg Dunkin.
Advertisement

For August 2018, our Camaro of the Month is the gorgeous 1969 Camaro shown here, owned by Gregg Dunkin. I reached out to Gregg for more information on his supercharged super-muscle car and below, you will find his story.

Gregg’s LS9 Camaro
I had always wanted a ‘69 Camaro since I had friends in high school in the early eighties that drove them to school daily (my brother and I shared a 78 Buick Regal in primer with no air or radio, so I preferred the bus).

I traded a 1970 Mach 1 for the Camaro in 2010. It was a fully customized car by Route 66 Motorsports with an LS2 engine, automatic transmission and power everything including a terrific stereo! The interior was completely altered with a smooth steel dash, console and rear deck waterfall to split the rear seats. This particular Camaro was in Camaro Performance Magazine four times to show others how to put Air Ride Technologies (now Ridetech) air ride suspension in a first generation Camaro. Recognized as the first Camaro from the first generation with Air Ride! The front suspension is a Chris Alston Chassisworks complete polished aluminum set up that is stunning against the Impulse Blue gloss painted undercarriage to match the rest of the car.

The car was upgraded in 2011 with a GM Performance LS9, a Bowler built 4L80 transmission and new wiring harness. The exhaust was changed to non-baffled Magnaflow system with stainless tubing. The final changes were a carbon fiber engine cover from Salvaggio Auto Design with an extended aluminum radiator core support cover both painted to match the cars exterior.

The car has been a joy to own and drive. Dependable to drive to shows even though it’s accused of being a trailer queen. I share the car with friends that don’t own a classic and they all were impressed with the comfort, drivability and performance.

The “Blue Devil” has one several Goodguys Awards, Carcraft National and Fbody National Awards. The plan going forward is to take it to Barrett Jackson Las Vegas in late September to sell for someone else to enjoy. I have had some great times with the car the past eight years and am ready to try another Pro Touring car for the future.

DeanMcManis wrote on August 11, 2018 - 2:14pm Permalink
Any chance on us seeing a video of Dunkin doing donuts with his Blue Devil Camaro? Sorry, I couldn't help it... Seriously, I would like to see more pictures of this cool LS-9 powered Camaro. It looks like an inspired effort.