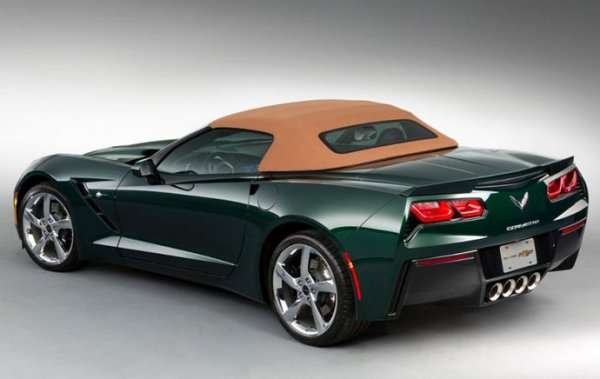 If you have been hoping to score one of the limited production Premier Edition 2014 Chevrolet Corvette Stingray Convertibles in Limerock Green without spending much money, you have four days left - as the latest National Corvette Museum is set to end on July 10th and fortunately for you they have a few tickets remaining.
Advertisement

When General Motors introduced the C7 Chevrolet Corvette Stingray Convertible, the automaker announced that they would introduce the newest topless Vette with the limited production Premier Edition that was similar in its design to the Premier Edition Stingray Fastback. General Motors built just 550 examples of the Premier Edition Convertible and with a long list of standard features, these models were both expensive and hard to find if you don’t live in the right area. Fortunately, the folks at the National Corvette Museum have a raffle running until Thursday (July 10th) and the prize is one of the rare dark metallic green Premier Edition Corvettes – which you could win for just $50.

The only problem was that with so many expensive options and such few units produced, the Premier Edition 2014 Chevrolet Corvette Stingray Convertibles were as expensive as a new non-Z06 Corvette gets – and the limited production brought about bigger markups from the dealership which drove the prices even higher. On top of the high price, finding one of these 550 Premier Edition convertibles that wasn’t spoken for can be very challenging. Luckily, the National Corvette Museum in Bowling Green Kentucky has you covered with their current free car raffle.

The tickets for this particular raffle are less expensive than some of the other contests held this year by the National Corvette Museum, costing you just $50 for a chance at winning a Corvette with an MSRP over $70,000. Only 5,000 tickets were originally available and with the drawing coming this Thursday, there are less than a thousand tickets remaining. Every other contest this year has either sold out or been very close to selling out so if you want to buy a chance to win the very last 2014 Corvette Stingray Premier Edition Convertible, head over to the National Corvette Museum website to buy your ticket today!

Panasonic Updates Profit Forecast, Noting How Much Tesla Batteries Help The Jump
2022 Porsche 911 GT3 Laps Nurburgring in 7:04 With Journalist Behind The Wheel
END_OF_DOCUMENT_TOKEN_TO_BE_REPLACED