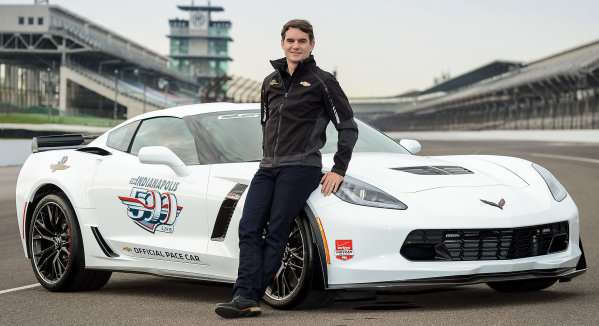 While it had been speculated that the new 2016 Chevrolet Camaro would be the official pace car for the 2015 Indy 500, General Motors announced today that the 2015 Corvette Z06 would lead the field at the 99th running of the Indianapolis 500 with local celebrity and NASCAR champ Jeff Gordon at the wheel.
Advertisement

We learned a few weeks back that the 2015 Chevrolet Camaro SS would serve as the official festival car for the 2015 Indianapolis 500, but even before that, it had been widely speculated that the new 2016 Camaro would be named the official pace car for the 99th running of the Indy 500. When the current Camaro was announced as the festival car, the expectations of the 2016 Camaro leading the field grew and when we learned that the 6th gen Camaro would debut a week before the race, it seemed like a lock. After all, what better way to show the world the next generation Camaro than at the front of the field of the Indianapolis 500.

Well, with today’s official announcement that the 2015 Chevrolet Corvette Z06 would be the 2015 Indy 500 pace car, the hopes of seeing the next gen Camaro in pace car livery are dead, but GM still gets plenty of good publicity with the most track capable Corvette of all-time leading one of the world’s fastest group of race cars.

Another in a Long List
When the 2015 Chevrolet Corvette Z06 leads the Indy 500 field to the green flag on May 24th it will be mark the 14th straight time that a Chevrolet vehicle served as the official pace ca, dating back to the 2001 running when an Oldsmobile Bravada led the field. Seriously – the Oldsmobile version of the Chevy Trailblazer was in Indy 500 pace car in 2001. Before that was the Oldsmobile Aurora in 2000, the Chevrolet Monte Carlo in 1999, the C5 Corvette in 1998 and another Aurora 1997, allowing General Motors to have built the Indy 500 pace car every year from 1997 forward.

The 2015 Indy 500 race marks the 4th time in 5 years where a Corvette has led the field and since its first pace car appearance back in 1978, the Corvette has been the official pace car 13 times (including this year). 2015 also marks the 26th time that a Chevrolet vehicle has led the Indy 500 field dating back to the 1948 running when a Chevrolet Fleetmaster Six was the pace car and since the first General Motors car led the field back in 1931, 49 different GM vehicles have held the honor of being the Indy 500 pace car.

Jeff Gordon to Drive the Corvette Z06
In the world of motorsports, one of the most recognizable names is Jeff Gordon. While the NASCAR legend never competed in the Indy 500, he grew up in nearby Pittsboro, Indiana and he has won the Brickyard 400 at Indianapolis Motor Speedway five times – including the inaugural run in 1994. Gordon is one of only two drivers to stand in the Indianapolis Motor Speedway winner’s circle five times, joining Michael Schumacher, who won five Formula One races there.

“Indy is hallowed ground for racers like me and I couldn’t be more thrilled to drive the Corvette Z06 pace car around the track that helped drive my success over the years,” Gordon said. ”The Indianapolis 500 is one of the most celebrated races of the year and an event I always dreamed of racing while growing up in California and in nearby Pittsboro. I’ve won five NASCAR races at IMS and the track will always be a special place for me, so to be able to participate in such a historic day will be something I remember for the rest of my life.”
Interestingly, in addition to serving as the driver of the official 2015 Indy 500 pace car, Jeff Gordon will also drive in NASCAR’s Coca Cola 600 – which is run on the same day. Gordon will spend the morning and the early hours of the day at the Indy 500 before flying down to Charlotte, North Carolina to race in the NASCAR race that begins at 6pm. It will be grueling on Gordon, but for a hometown kid, it is worth the effort.

“It’s great to have Jeff Gordon serve as this year’s pace car driver,” said Jim Campbell, Chevrolet U.S. vice president of performance vehicles and motorsports. “He is a true champion who has earned the respect and admiration of competitors and race fans alike. It will be very special to have Jeff lead the Indy 500 field to the green flag, behind the wheel of the most powerful and capable production car ever from Chevrolet – on a day he’ll also be competing in the Coca Cola 600 NASCAR race at Charlotte Motor Speedway.”