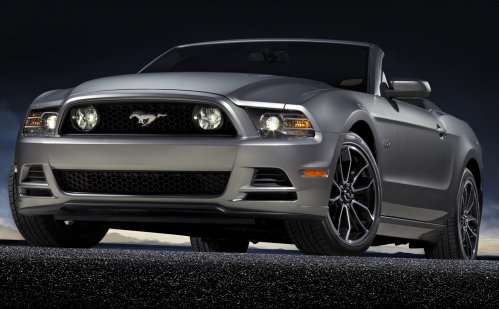 We have seen spyshots, we have seen teasers and this morning, we all get our first official look at the slightly refreshed 2013 Ford Mustang that is set to debut tomorrow at the 2011 LA Auto Show – which not only gets a few new features but Ford has upped the power of their 5.0L V8 in the 2013 Mustang GT to 420 horsepower.
Advertisement

Over the past few weeks, the automotive paparazzi has offered up a handful of spyshots of the 2013 Ford Mustang and Mustang GT causing much speculation as to how much would change for the 2013 model year. We expected that we would see a new front end but these spyshots suggested that the Mustang GT would lose the grille mounted foglights in favor of a new location in the lower fascia. However, while the official Ford images have shown that the standard V6 and Mustang GT have both gotten the protruding front fascia previous found on the Shelby GT500, those large foglights are located between the headlights. In addition to the front fascia of the 2013 Ford Mustang bearing a striking resemblance to the previous Shelby GT500, Ford has made projection headlights standard with a pair of LED bars highlighting these high tech headlights. Along the lower portion of the front end, Ford has given the 2013 Mustang a new front splitter to add to the sporty look with the new lower fascia area being revised to offer better cooling and a more aggressive look. Also, Ford has modified the hood of the 2013 Mustang GT to include hat extractors that should help keep the engine bay temperatures down.

One of the regular complaints about the 2010-2012 Ford Mustang styling was the heavy amounts of black plastic running along the bottom of the sides and rear of the car but on the 2013 Ford Mustang and Mustang GT, Ford has gone with body-colored trim to give the pony car a more upscale look. Out back, in addition to the new painted lower fascia, Ford has added a new black taillight panel that encases the flashy new LED taillights which still bear the familiar Mustang 3-light design. Unlike the 2012 Mustang that has a single unit split up by the reverse lights, the 2013 Mustang wears a taillight design that is more clearly separated with light “rope” around the edges with center sections that light up individually. This sleek new exterior comes with two new color options - Deep Impact Blue and Gotta Have It Green. Last but certainly not least, the outside of the 2013 Mustang receives an interesting new LED projection system built into the bottom of the side view mirrors that projects the Mustang logo onto the ground when the doors are unlocked via the key fob.

Inside, the 2013 Ford Mustang and Mustang GT receive an optional set of leather Recaro racing seats similar to those found on the Shelby GT500 and Boss 302 that include room for a driver and passenger wearing helmets. These seats also look great, for those who haven’t had a chance to check them out in person. As expected, the 2013 Ford Mustang indeed receives the 4.2” productivity screen that includes the new Track Apps, offering g-force, a quarter mile timer, a 0-60 timer, and braking timer – complete with countdown timers with a dragstrip style Christmas tree. On a side note, the gallery on the right offers a look at the accelerometer gauge which reads a 0-60 time of 4.7 seconds with a quarter mile time of 12.6 at 117 miles per hour with an automatic transmission.

The changes made to the 2013 Ford Mustang are not purely cosmetic, as Ford has also managed to squeeze an additional 8 horsepower out of the 5.0L V8 – bringing the power of the 2013 Mustang GT to 420 horsepower. Those 2013 Mustang GT models equipped with the 6-speed automatic transmission get the added control of Ford’s SelectShift feature. Next, Ford has introduced the new 2013 GT Track Package that is available strictly on models equipped with 3.73 gears and the 6-speed manual transmission. This track-prep package adds an engine oil cooler, an upgraded radiator, high performance brake pads, the same Torsen differential from the Boss 302, 19” wheel wrapped in high performance tires and the current Brembo Brake Package featuring 14” vented front rotors. Finally, the V6 Performance Package previously only offered on 3.7L Mustangs with the manual transmission is now offered with the automatic transmission, although the 3.7L engine does not receive any increases in power for the new model year.

The 2013 Ford Mustang V6 and 2013 Mustang GT will all be built at the current Mustang build location at Ford’s Flat Rock, Michigan plant with the first examples of these new pony cars reaching dealerships in the spring of 2012.

Check out the gallery on the right for a closer look at the 2013 Ford Mustang and stay tuned to TorqueNews for all of your industry news – including coverage from the 2011 LA Auto Show.

Auto Interest wrote on November 16, 2011 - 8:22am Permalink
Big news for 2013 Ford Mustang ahead of the LA Auto Show. This truly is a powerful look. I expect this car to be very successful in accomplishing its sales target.
Auto Driver wrote on November 19, 2011 - 1:06pm Permalink
Very good review of the specs of the 2013 Ford Mustang. Do you think this will sell better than its other muscle car competitors? The aggressive look of the 2013 Mustang is stunning.
Just a Driver wrote on December 7, 2011 - 12:35am Permalink
Both the 2013 Ford Mustang and the 2013 Mustang GT are very powerful. I am thinking many people would wish this car also would pass all of the NHTSA's safety tests. Yet, who care about safety when it comes to performance cars?
Mustang Fan wrote on December 7, 2011 - 8:55am Permalink
There are few things that I like about the 2013 Mustang Boss. The front splitter is very aggressive and the hood has a heat extractors. Seeing better entertainment coming to muscle cars is another great feature. I mean the SYNC in Mustang for the first time.