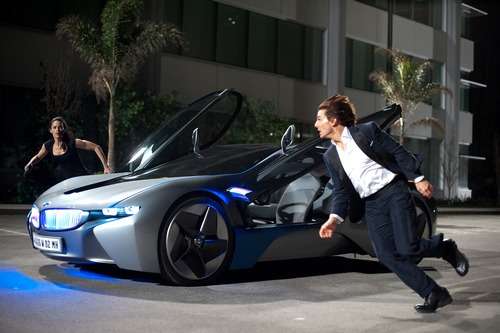 BMW to debut i3 and i8 concepts at LA Auto Show

On Wednesday at the 2011 LA Auto Show BMW will debut two visionary concept vehicles from its new sustainable brand, BMW i, the fully-electric BMW i3 and BMW i8 concepts. As well BMW will be introducing the new BMW M5 along with both BMW i concept cars.
Advertisement

The BMW i3 and i8 concept vehicles represent the first purpose-built electric and electric-hybrid vehicles to be made primarily of carbon fiber when the cars become available in 2013 and 2014.

The BMW i8 Concept, which is the successor to the BMW Vision EfficientDynamics car, will be featured in the upcoming 4th installment of the Mission Impossible franchise, Mission Impossible: Ghost Protocol. (Tom Cruise will star, as he reprises his role as Ethan Hunt.) The BMW i8 is a sleek, low-slung, silver and glass sports car with flip-up doors. The BMW i3 concept is a more compact car ideally for congested city driving. It was previously known as the “megacity vehicle.” The i3 will have large glass doors that open “coach” style, meaning the rear doors opening in the opposite direction from the front. The same color scheme will be used on both concepts.

The all-new BMW M5 will be a much anticipated debut for BMW fans and car enthusiasts. The M5 combines an exceptionally dynamic high-performance sports car with a luxurious business sedan for everyday driving. It has been considered by many as the pinnacle of sports sedans for quite a long time.

Tesla Giga Berlin's New Hurdle: It's Not Only the Gov't, but Now Tesla Itself
Teslas Are Sold Out Until 2023, But The Timing May Reverse
END_OF_DOCUMENT_TOKEN_TO_BE_REPLACED