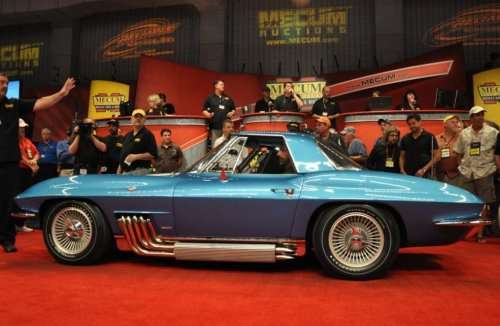 Today at the Indiana State Fairgrounds, the 24th annual Dana Mecum Original Spring Classic Auction kicked off – offering buyers and tire-kickers a chance to look at the world’s largest collector car auction with some of the most amazing modern and vintage vehicles that you will ever see in one place.
Advertisement

The 2011 Mecum Original Spring Classic Auction began this morning and it runs through Sunday evening with gates opening at 10am each day. There are over 2,000 vehicles expected to roll across the Mecum auction block over the next six days so whether or not you have the money to invest in a new classic or antique vehicle, Mecum auctions are well worth the $15 admission price. If you don’t have the time for a road trip to Indianapolis you’re in luck as TorqueNews will be in attendance over the next few days, bringing you a look at the unbelievable collection and the incredible experience that Dana Mecum’s auctions bring to show-goers. In addition to the coverage here on TorqueNews, HD Theater will have live coverage of the event on Wednesday, Thursday, Friday and Saturday evenings (check local listings for times).

One popular misconception about the Mecum Auctions is that you have to walk in with a half million dollars to drive out with a new vehicle. I attended the Mecum Indy Auction in 2010 and was amazed by the incredible scope of classic cars. Basically, if you name a year, make and model of American vehicle – there is one for sale somewhere on the grounds…but it’s not just American models. There is a great spread of European exotics with a light sprinkle of rare Japanese models, so there is something for every car collector. The television programs that do an awesome job of bringing the action of the auction right into your living room but those shows feature the best and brightest. This also means that they are often the most expensive models but for someone who wants to do some looking around, there are bargains to be had. Last year, I saw cars that would roll into the average weekday car show and roll out with a nice big trophy for under $20,000 and I saw what most people would consider “great drivers” for under $10k.

So, to show that you don’t need to be a well known car collector like Ken Lingenfelter or Jay Leno to leave the Mecum Auction with a gorgeous new car, I will not only be bringing you the most amazing cars and trucks of the show but I will also bring you a look at some of the bargains. While the Mecum Auctions have a huge selection of vehicles, American performance cars are among the most popular vehicles in attendance so if you are an American muscle car lover – stay tuned for some of the most amazing muscle cars from the history of the American automotive industry.

In addition to having over 2,000 of the most incredible collectable cars in the world, Mecum auctions feature a variety of other items like memoriabilia, apparel, non-vehicle collectables and a nice spread of the finest carnival food and beer you could ask for at a great auto event like this one. Even if you are in no way looking for a new car, the Mecum Auction is like one of the most incredible car shows you will ever see – making the Mecum Indy Spring Classic Auction a must-see for gearheads around the country.

Car Nut wrote on May 20, 2011 - 9:56pm Permalink
Too Bad Dana has to be such a Ham. I tune in to see the cars, but too often it's him and equally sweaty and fat son, or that annoying fat pig in the audience "mecum sold sold sold". Lets look at the cars, enough with the circus. Its really unfortunate that such great cars are diminished by the propaganda MECUM show, filthy pig used car salesmen!