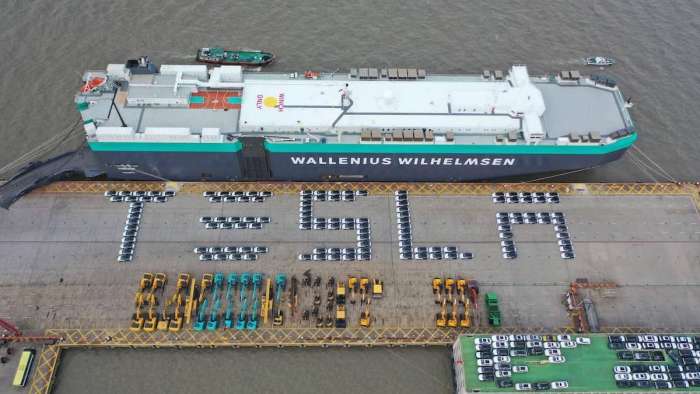 Tesla has a new price reduction. Model 3 from China is, which is immediately available, is now another 1000 euros cheaper.
Advertisement

Usually the prices at Tesla are set in stone because CEO Elon Musk considers the usual haggling when buying a car to be unfair. However, the company makes an exception for a shipment of Model 3 from China reports Teslamag. Surprisingly, it was announced in mid-October that Europe is now also being supplied from the Tesla Gigafactory in China - whether temporarily or permanently, was initially open. Now, after this news, hundreds of pre-produced Tesla Model 3s from there appeared on the websites for Europe. Because they are not yet the refreshed version that Tesla also announced in October, they were around 2000 euros cheaper than newly configured ones in Germany, for example. And now Tesla has lowered the price for it again.

3000 Discount for Tesla Model 3 from China

The cheapest Tesla Model 3 in the basic version standard range plus (SR +) on the German sites now costs 40,880 euros, another 1000 euros less than before, Teslamag reports. If you order it again, you have to pay 42,900 euros plus the delivery fee of 980 euros, for a total of 3000 euros more. In Germany, there were a good two dozen of these China Teslas at a discount to choose from on Monday, at least as many were to be found on Tesla's other European country websites.

However, if you choose one of these electric cars, you won't get the latest version of the Model 3. In mid-October, Tesla announced a facelift, which includes some visual and some technical innovations. The exterior trim strips are now made in black instead of chrome and the center console has a less scratch-sensitive surface. Technical innovations are a heat pump (but probably only for the variants of the Tesla Model 3 with all-wheel drive and larger battery), an electrically operated tailgate and double glazing for the front side windows.

Longer Range Thanks to The LFP Battery

On the other hand, Tesla specifies a slightly longer range for the Model 3 SR + from China (the only exported variant so far): 440 kilometers compared to 430 kilometers for newly produced ones from Fremont. The reason for this is that a battery with LFP cells from CATL has recently been installed in the basic Chinese Tesla. These are significantly cheaper and more robust batteries, but weigh more, so Tesla opted for a slightly higher capacity. In addition, unlike cells with different chemistry, they can be charged up to 100 percent without hesitation, which further increases the range of the practice.

For some interested parties, a Tesla Model 3 SR + from China at a reduced price could therefore be an attractive offer. However, the renewed price cut does not suggest that the demand for it is huge. Even for Denmark, where used Teslas from Germany are currently being bought at almost new prices due to an upcoming tax hike, 25 finished Model 3 SR + models in the old look were offered on Monday.