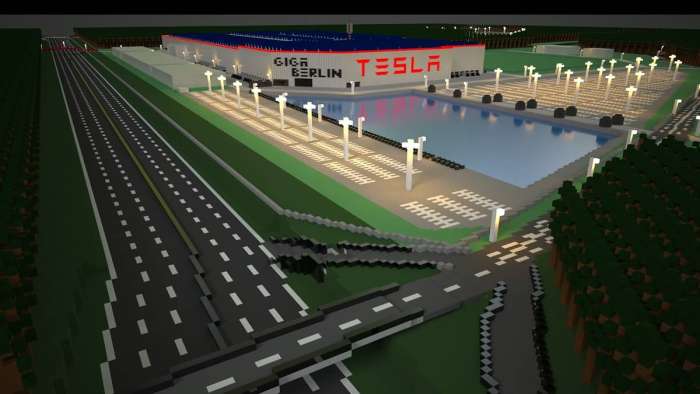 In this video article, I am going to show you the completion of phase one of the 3D model of the Tesla Giga Berlin. In my previous videos, I have mentioned and thanked the local Tesla enthusiasts from Berlin and Grunheide who send us daily updates from Giga Berlin via Twitter, but Emil Senkel, a high school student from Berlin, did something extraordinary: he built a 3D model of Tesla Giga Berlin and hope to give it to Elon Musk at the groundbreaking of Berlin Gigafactory 4 at the end of this month.
Advertisement

When it comes to Tesla Giga Berlin if power cables are laid in Grünheide, it is worth a tweet these days. If the trees fall in the Tesla forest in Grunheide, people tweet anyway. Every demo, every political statement about Tesla, every speculation about the construction progress is followed with worldwide interest.

Today I am going to tell you one of the Tesla enthusiasts from Berlin, Emil Senkel who is a high-schooler, who studies hard and goes to the Giga Berlin site daily and tweets updates from there. Emil also completed phase one of the Giga Berlin’s 3D Model and emailed me to share with Torque News readers and our Youtube Channel's subscribers.

Watch this video to see stunning images of how Emil completed the Giga Berlin 3D model and click to subscribe to Torque News Youtube channel for daily Giga Berlin and automotive news reports.

This is Emil Senkel and his Twitter. While you are about to watch his 3D work of the Berlin Gigafacatory 4, let me tell you a few things about Emil and Tesla enthusiasts like him.

It is glowing Tesla fans like Emil Senkel who spread water level reports about the location of the car factory every day via "Twitter". "I am enthusiastic about this company right from the start. In my eyes, it is the most innovative in the world," says the Berlin high school graduate to Moz.de while walking over the railroad track that has been dead in the Grünheider forest for decades and which is to bring freight trains to Tesla's Gigafactory from mid-2021.

When the first factory was opened in the United States, it was clear to him that he would have to move there at some point. The fact that Tesla boss Elon Musk is now having the plant built for Europe in Brandenburg is, of course, all the more wonderful. "I will work there one day," says Emil Senkel very firmly. He can well imagine robot programming as a field of work. But now he's tweeting and going to Grünheide by train and bike as often as his school duties allow. Immediately after Musk announced the corporate plans for Brandenburg in mid-November, he started. "Tesla fans in China did that when they started the Gigafactory."

A third of the almost 2,000 people who are now following Emil Senkel on the social network are overseas. And it was a Finn who advised the 17-year-old to ask the network community for donations for his services. The young man promptly collected 300 euros within four days for better camera equipment, with which he documents the work on the construction site. Emil Senkel also tells on Twitter that he is saving for a Model 3 from Tesla. And lo and behold, a good 900 euros have so far been donated from all over the world.

"You have to set goals," he says. His most recent is to finally meet Elon Musk, who has already agreed to come, at the cornerstone for the plant, which may be due in March. Of course via Twitter.

At the end of February Elon Musk already "liked" a video snippet from Emil Senkel. The sequence from a Pro-Tesla demo was subsequently accessed 130,000 times. A detailed model of the future work, which Emil Senkel designed with the Magicavoxel program on the computer, should now prove to be the final door opener to Musk.

You can see the motorway, the railway line and the plant in the first stage of expansion. It is also easy to see how the factory could be extended to the side and upwards towards the railroad track by quasi mirroring part one of the factory. "I want to print out the finished model in 3D and hand it over to Elon Musk for the laying of the foundation stone," says Emil Senkel.

For Brandenburg and all of Germany, it is a stroke of blessing that Tesla chose this area and sets a trend, says the young man from Berlin. He cannot understand the criticism of the type of battery production and the short range of electric cars. "The batteries are getting better and better. Tesla cars are much cleaner than petrol engines." Like him, at least four other intensive Twitteratis from the region who are passionate about Tesla see this. One of them announced the arrival of the first crane on the Giga Berlin construction site on Wednesday. Emil Senkel can only laugh at the question of whether there is possibly paid PR for Tesla behind the enthusiasm. "Then you could also assume that all Tesla opponents in Brandenburg were paid by VW."

In the meanwhile Tesla Giga Berlin contractor Arikon is moving ahead with full speed and yesterday we learned how much Tesla paid for the Giga Berlin land. Check back tomorrow for an important update on Tesla Gigafactory 4 coming up.

See you in my next story where I am discussing Giga Berlin's drone restrictions lifted, work progress and the vitality of Tesla's speed to get EV market share in Germany.