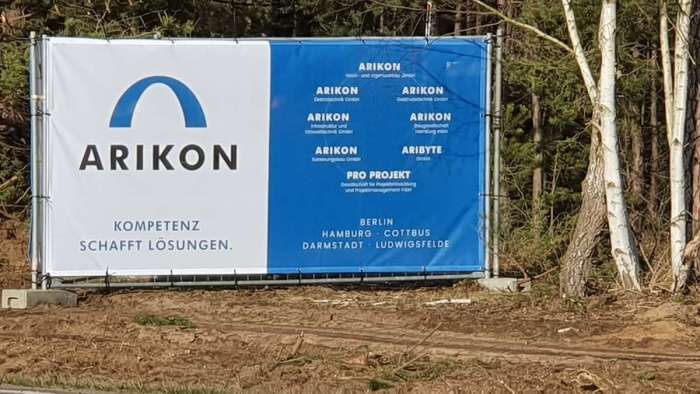 The company, which is going to build the Tesla Giga Berlin is Arikon. Today Arikon placed its sign at the entrance of Tesla's Gigafactory 4 construction area and reveals very interesting information on its website about the work on Tesla's European Gigafactory and its handling of the environment while building Giga Berlin.
Advertisement

Arikon, who is now Tesla's official contractor for building the Gigafactory 4, today placed its sign at the entrance of Tesla Giga Berlin. Interestingly, from Arikon’s website we learn a lot of very interesting details, about the size of the project, the jobs it’s going to create and how Tesla handled the species living in the forest before clearing it. Stay tuned. This was very interesting for me too when I was researching for this report.

Today, on March 3 of 2020 this sign, that you see as the image of this story, appeared at the entrance of Giga Berlin.

For those of you, who wonder who Arikon is, here is what this construction company does:

I think this is it. Arikon is the company which Tesla has contracted to build the it’s Europen Gigafactory 4, known as Giga Berlin. My local contacts in Grunheide, where Tesla is building the Giga Berlin, says Arikon is also the company, which cleared the land from the forest and harvested the trees. Thus, Arikon is the company that started the project, cleared the land and will build the Giga Berlin. The groundbreaking is expected in the second half of March and as I mentioned in my yesterday’s Giga Berlin update, Elon Musk will attend the groundbreaking ceremony.

On its website Arikon has a lot of information about Giga Berlin including pictures of clearing the trees, but it doesn’t mention neither Tesla nor Giga Berlin.

We learn that the entire Tesla Giga Berlin will be on a 300 ha commercial area. Here is what Arikon’s information reads regarding Giga Berlin.

"The production of ecological mobility technology is to start on the 300 ha commercial area in Grünheide / Brandenburg in mid-2021. (The local mayor says groundbreaking of Giga Berlin may take place sometime during the second half of March 2020).

"Preparations for construction are currently in full swing at the "currently most spectacular construction site in Germany." In just a few days, 90 hectares of a commercial forest were cleared in the first stage of expansion. Responsible for the implementation of this demanding project: ARIKON Infrastructure and Environmental Technology LLC based in Ludwigsfelde.

"36 harvesters and 18 forwarders were used in Grünheide to keep to the tightly timed schedule. A challenge even for the ARIKON infrastructure specialists. The use of the heavy equipment, manpower and logistics had to be precisely coordinated: a very special choreography - perfectly staged by ARIKON."

Interestingly we also learn that despite carrying one of the largest economic projects in Germany since the turn of the century, Tesla had to care for sustainability and environmental compatibility.

"Because even though the pine forest, which was planted on the area in the early 2000s, is considered to be home for little species, Tesla created 400 nesting sites outside the forest to be cleared, before the work was carried out, and existing ant hills were moved by specialists, and reptiles relocated. The cleared forest area is replaced by planting in three places," reads Arikon's website.

Let me repeat this again. Before harvesting the forest, Tesla has created 400 nesting sites for the little species living in the forest. Tesla has replaced the cleared forest area by planting in three other places. This probably means that Tesla planted 3 trees for each tree harvested from the current Giga Berlin Site. Tesla also had specialists removing the existing anthills and the reptiles were relocated as well.

Speaking of impact, here is actually how Tesla will impact the German automotive sector in 6 ways.

What happens to the trees harvested from the Giga Berlin site.

The arable ripe pine was cleared during the clearing work by ARIKON Infrastructure and Environmental Technology LLC after the felling. Then the shredded tree cut is used as valuable biomass for energy generation in a thermal power station. This is an exemplary circular economy that focuses on the responsible use of natural resources.

How many Tesla jobs are expected to be created with Giga Berlin.

According to Arikon, the state government of Brandenburg is expecting up to 8,000 newly created jobs in this gigantic project, which sends signals that can be seen from afar: The investment and implementation of large-scale projects in the context of the necessary energy transition and the necessary intervention in the natural balance can succeed together.

See you in my next story where I show a video of Tesla and Arikon bringing the first crane to work on the Giga Berlin construction.