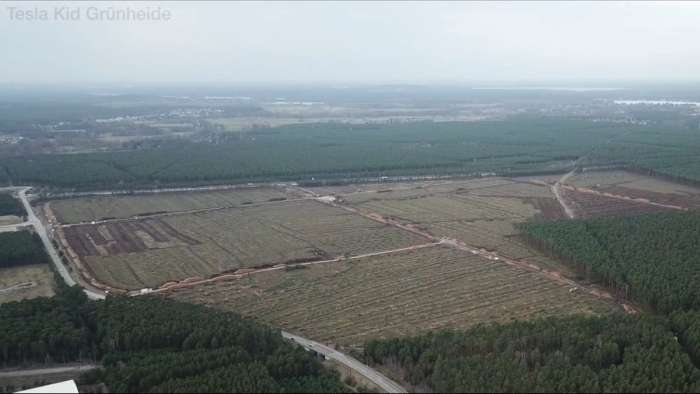 This Is How Much Tesla Paid For Giga Berlin Property

The purchase of the property for the planned Tesla automobile factory Giga Berlin is an interesting story. The purchase agreement between Tesla and the state of Brandenburg has already been signed and has been notarized since the end of January 2020. However, Tesla is not yet the owner of the 300 hectare site. How much is Tesla going to pay for the Giga Berlin property?
Advertisement

Tesla agreed to buy the 300 hectares of property in Grunheide to build it’s Gigafactory 4. The agreement is already signed with the government, but Tesla is not yet the owner of the 300-hectare site. Why? Because there is no entry in the land register.

The entry in the land register will take place only when the purchase price has been paid. And that, in turn, depends on a second appraisal of the value of the property, which was only provisionally determined in a first appraisal. Now the second appraisal report is also available, which should actually be final, reports RBB24.

So there is the 2nd appraisal of the property and according to this second appraisal, Tesla should pay around 2.5 million euros more for the Gigafactory property near Grünheide than stated in the first property appraisal report.

German media reports that Tesla apparently wants to get the purchase over with quickly.

The Brandenburg land spokesman Florian Engels announced on Tuesday that the sale of the property was almost complete. But just almost. According to RBB, the new purchase price is based on a value of 14.35 EURO per square meter - and there are still partial measurements that could change the price slightly. Tesla should only be able to pay once it has been finalized, which is a prerequisite for entry in the land register. According to a report from DPA, the entry should be made this March.

Tesla should be entered in the land register later this month and thus become the full owner of the site. The proceeds from the sale of Landeswald go to the assets of the Ministry of Forestry.

The groundbreaking for the Gigafactory Grünheide could also take place this month, as both the mayor of the town and Brandenburg's Minister of Economic Affairs Jörg Steinbach say. Tesla CEO Elon Musk even wants to travel there personally.

The work in the Giga Berlin is moving forward at an amazing speed. Today Tesla and its Giga Berlin contractor Arikon brought the first crane and heavy equipment to the construction zone and it is expected that a different type of work will start tomorrow with the crane, preparing the ground for the Giga Berlin's groundbreaking ceremony.

Tesla Giga Berlin is going to have a huge impact on the German automotive sector. Here are 6 ways Tesla is going to impact the automotive industry in Germany.

See you in my next story where I am discussing how one high school student from Berlin built a stunning 3D model of the Giga Berlin and why he deserves meeting Elon Musk when the latter goes for the Gigafactory's groundbreaking at the end of this month.

Tesla-Funded Research Reveals One of The Biggest Mysteries of EV Battery
Tesla Tesla Buyer Nets a Whopping $12,000 Discount After Asking for Reduction
END_OF_DOCUMENT_TOKEN_TO_BE_REPLACED