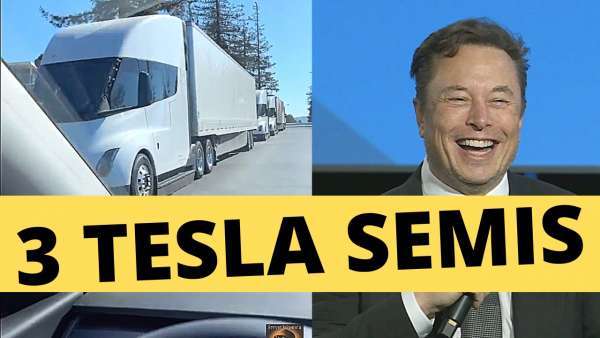 Very recently electric vehicle enthusiast Shoaib Quraishi posted a video of a Tesla Semi sighting that featured three of the vehicles in one location. As could be seen in the video, two of the Tesla Semi electric trucks were pulling trailers behind them while one was bobtailing. All three were updated prototypes and looked ready for production.

Just like the Cybertruck, Tesla's Semi's design also doesn't leave people indifferent. But in this case, it doesn't need to be really beautiful truck, but has to be rather economic, with a great environmental impact.

The Tesla Semi is one segment where a new vehicle type will have an outsized effect on reducing oil usage. Semis use a lot of diesel and they move most of the products we consume.

Tesla semi is the most important product Tesla makes in terms of environmental impact. its a very important part of the puzzle. Sure, cars are nice and all, but event electric sedans and crossovers like the Model 3 and Model Y don't move the demand needle. But Semis will.

One of our Torque News Youtube followers wrote that he is very excited about the imminent deliveries of the Tesla Semi electric truck. He says he is guessing that the Tesla Semis will be used to transport 4680 battery cells from Fremont to Reno where the semi is going to be made and transport 2170 cells from Reno back to Fremont where the S 3 X Y are made.

We will have to see if this is so. Also, this should allow Tesla to work on platooning and leverage the great strides that have already been made with FSD.