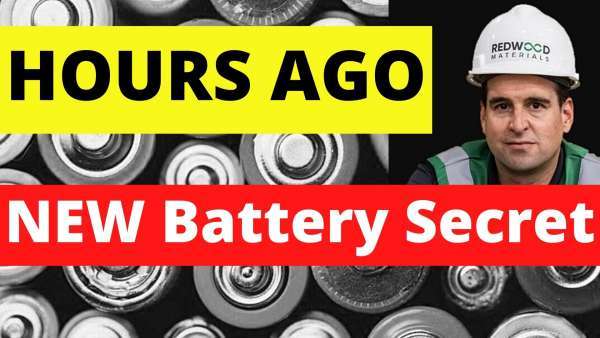 Redwood Materials, the EV battery recycling company, created by Tesla co-founder J.B. Straubel, has been keeping a big secret and it just revealed it to Bloomberg: it isn’t really a recycling company but wants to transform the entire battery industry making a huge shift.

For the first time, Straubel revealed why he really left Tesla and that this big shift in the electric car battery industry is to move a huge chunk of the battery-component industry from Asia to the U.S.

“It’s both inspiring and terrifying to see so many nations and car companies announcing their shift to electric vehicles,” Straubel said. “But there’s a massive gap in what needs to happen.”

Straubel says to fill this gap he has set out to build one of the largest battery materials factories in the world. Redwood, which currently operates three factories in Nevada, is searching for a location farther east to build a new million-square-foot factory. At a cost of well over $1 billion, according to Straubel, the addition will enable Redwood to become a major U.S. producer of cathodes.

If Redwood Materials' battery production factory reaches its capacity it will be several times bigger than Tesla Giga Berlin's battery production (after it reaches its full capacity of 250-300 kWh). Straubel says the U.S. factory will produce material for 100 gigawatt-hours of batteries a year by the end of 2025. That’s enough for about 1.3 million long-range vehicles a year, on par with the biggest producers in Asia. By 2030, the same facility will ramp up to 500 gigawatt-hours a year, he says. At today’s prices, that’s $25 billion of cathodes a year. Redwood plans to build a similar operation in Europe by 2023.

Some people think that Tesla one day may acquire Redwood Materials. But is there a need for it?

In the mean time, Tesla is registering new approvals for Giga Berlin and its EV battery production.