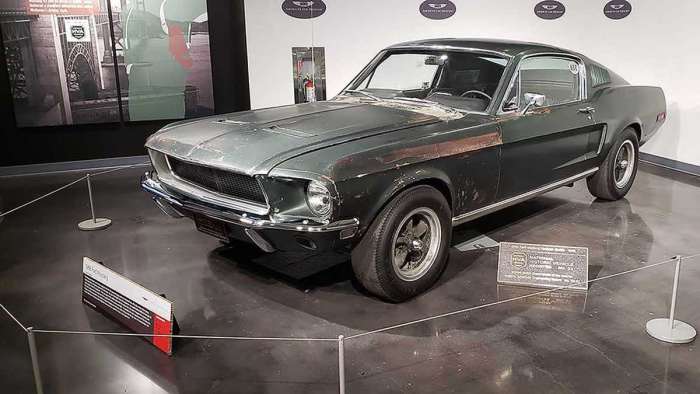 The Hero Car from the movie Bullitt is the ultimate barn find story. After three Ford-produced Bullitt special editions, will the Mecum auction of the original mean the end of the Bullitt story for Ford? What does the future hold for the Ford Mustang Bullitt as the original Bullitt goes for an auction.
Advertisement

Was there any actor cooler than Steve McQueen? Certainly there wasn’t a better car chase scene than the one in the movie Bullitt. That 1968 Mustang GT Fastback known as Bullitt going full bore through the streets of San Francisco with McQueen behind the wheel stands the test of time as amazing cinema action. Bullitt, the movie and the car, are indeed legendary. Now the one and only remaining Bullitt Mustang from the movie is going on the auction block.

History of the Original Bullitt Mustang
The life cycle of this actual Mustang movie prop is quite extraordinary. Upon completion of the movie it was sold to Robert Ross, an employee of Warner Brothers. Ross actually drove this Mustang as his daily driver.

That alone is pretty cool, and I’m sure it was quite a talking point for him. Frank Marranca bought the car from Ross in 1970. Marranca owned the car up until 1974 when he placed an ad in Road & Track where Robert Kiernan saw the ad and offered $6,000 for it.

This movie prop original was now in the hands of its third owner. Kiernan also drove it as a daily driver, and turned down multiple offers for it, including one from Steve McQueen himself. The car was garaged and stored away once it hit 65,000 miles.

Nobody knew the car was still in existence and quiet whispers began within the Mustang community that the car was destroyed or no longer existed. It wasn’t until 2001 that Kiernan’s son Sean, who now owned the car, realized how special it was. That’s when Ford introduced a Bullitt-inspired GT Mustang. Still the whereabouts of the Bullitt Mustang was kept secret and there was even a rumor that the original was seen in the desert in Mexico.

So, secretly, the legend of what happened to the Bullitt Mustang grew. That was until 2017 when Sean Kiernan revealed that it was still around and had been well maintained and even had the engine rebuilt. Sean’s dad had passed away from Parkinson’s so it was time for the Bullitt to come out of hiding.

How Much Will the Original Bullitt Sell For?
Kiernan took the Mustang on a publicity tour that started at the 2018 Detroit Auto Show where McQueen’s granddaughter was modeling with it and Kiernan fielded media questions. The car became a celebrity and something of Mustang legend. Several national car show appearances and Kiernan announced he was selling it.

The Bullitt would go on a “farewell tour” in the summer and fall of 2019. Kiernan said on his Facebook page: “Through a lot of conversation and prayer my family and I have decided to sell our car, the 1968 Mustang GT fastback known as Bullitt. I can promise that we have thought this through together and decided that this is the best decision for the family. Bullitt has been part of my family for 45 years and we have celebrated her in the grandest way possible, and now it will have a new role and new meaning to the future owner.”

The Bullitt will be one of the headline cars at the Mecum Auctions in Kissimmee, Florida in January 2020. There is no reserve on this car, but most experts speculate that the car will fetch anywhere from $4-5 million on the auction block. It’s a perfect blend of Mustang history and movie history. So both car collectors, celebrities and movie memorabilia collectors will be interested.

Kiernan said, “I have accomplished what I set out to do with the car; Tell my Dad’s story in the best way possible and share the car with the world. I had no idea what to expect when we unveiled the car in January 2018 in Detroit, but since then everyone has been absolutely excited and respectful to see the car and hear the story.”

How Many Bullitt Mustangs Has Ford Created
There have been three Special Edition Bullitt Mustangs created by Ford. The first year was 2001, then 2008-09 and then 2018-19. Ford will transition from the Bullitt to a new Mach 1 for 2021, as I reported on last week. Alonso, who has written two books about the Bullitts is a collector and enthusiast. He owns all three Bullitts including a black 2001, a highland green 2009, and dark highland green 2019. The original Bullitt was also dark green.

“Each one drives differently based on the capabilities of the platform on which they were based,” he said. “However, each of them looks the part, sounds the part (Ford tuned the exhaust for a throatier sound than the GT model on which it is based) and feels the part when cornering, accelerating and braking.”

As for what the future holds for Ford producing another Bullitt, Alonso is hopeful. "It will be interesting to see what the base Mustang 2-door model looks like in 2028 since that would be the 60th anniversary of the release of the movie Bullitt,” he said. “After the 2001 model, those of us who owned them thought, we won't see any more. The same thing happened in 2008. Now here it is, and a third one exists. I suspect around the 60th anniversary, the Mustang 2-door could be battery-powered.”

Ford has been somewhat unpredictable lately when it comes to Mustang. Between the Mach E, and announcing a new Mach 1, you never know what the future might hold for Mustang or any variant of the brand. Alonso wonders if possibly an electric Bullitt could be in Ford’s plans. He said, “We will have to see what the Mustang line-up looks like at that time. I don't think there would be a 4-door crossover Bullitt Mustang, but stranger things have happened!”

Tesla-Funded Research Reveals One of The Biggest Mysteries of EV Battery
Tesla Tesla Buyer Nets a Whopping $12,000 Discount After Asking for Reduction
END_OF_DOCUMENT_TOKEN_TO_BE_REPLACED