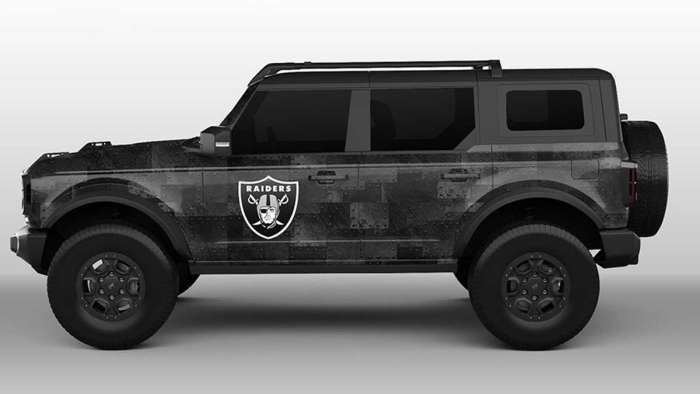 Ford Maverick Will Make Its Public Debut During Barrett-Jackson Las Vegas; Badlands Raiders Edition 4-door Bronco To Be Auctioned Off For Charity

Las Vegas is usually the place to be on any given day. But from June 16-19 it will be a big draw for car enthusiasts as the Barrett-Jackson Auction pulls into the Las Vegas Convention Center. Many exciting and rare vehicles will hit the auction block during this event. But it’s one truck that won’t be up for bid, that will be a draw.

Ford Motor Company will show the exciting new Ford Maverick truck to the public for the first time during the Barrett-Jackson auction in Las Vegas. Read more about Ford’s small, hybrid pickup truck below.

Barrett-Jackson’s charitable tradition will continue at the 2021 Las Vegas Auction, June 17-19 at the brand-new West Hall of the city’s convention center. One very special Ford Bronco will hit the auction block for a good cause, and it’s appropriate for Las Vegas. 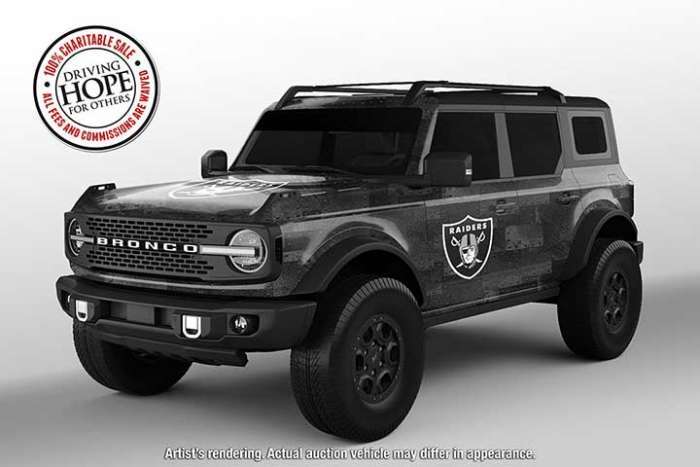 This example of the much-acclaimed new generation of the popular SUV will be wrapped in Las Vegas Raiders regalia, and the sale will benefit both the Las Vegas-based Grant A Gift Autism Foundation as well as the Raiders Foundation. The vehicle, which will come with some Raiders goodies as well, is already being promoted by the Raiders organization with the humorous tagline, “It takes a Raider to tame a Bronco.”

The Bronco, powered by a 2.7-liter EcoBoost engine mated to a 10-speed automatic transmission, is fully kitted out to tackle anything on or off the road. It has front stabilizer bar disconnect for increased articulation, electronic-locking front and rear axles, advanced 4×4 with automatic on-demand engagement, removable doors and top, LED signature lighting, tow hooks and a heavy-duty modular front bumper. Also equipped with four-wheel disc brakes with ABS and a wheel-lock kit, this Bronco also features the Sasquatch Package, consisting of 35-inch tires with 17-inch beadlock-capable wheels, front- and rear-locking differentials, Bilstein shocks, 4.7 final drive ratio and high-clearance fender flares.

The Maverick slots into the Ford truck family, smaller than the Ranger, but similar in size to the Ford Bronco Sport.

Maverick comes as a standard five-passenger, four-door pickup, with a full-hybrid powertrain and a projected EPA-estimated rating of 40 mpg city fuel economy. It all comes with a starting MSRP of $19,995 according to Ford.

The unibody Maverick is offered at three trim levels – XL, XLT and Lariat. An FX4 package available for all-wheel-drive XLT and Lariat trucks adds more off-road capability with rugged all-terrain tires and suspension tuning, additional underbody protection, and off-road-focused drive modes like Mud/Rut and Sand, as well as the addition of Hill Descent Control. The Maverick has a 121-inch wheelbase and 8.3 inches of ground clearance.

Ford proudly totes that the Maverick is their first truck in North America to feature a full hybrid powertrain standard. The 2 .5-liter Atkinson-cycle four-cylinder hybrid powertrain delivers 191 horsepower when combined with the electric motor and 155 lb.-ft. of torque mated to a continuously variable transmission driving the front wheels. It features an in-house-designed and manufactured electric traction motor, which is light and powerful.

Ford says Maverick will have a standard payload of 1,500 pounds and the volume to carry a standard ATV, plus it has the capability to tow 2,000 pounds.

Those who want more capability can upgrade to a 2.0-liter EcoBoost gas engine delivering 250 horsepower and 277 lb.-ft. of torque with an 8-speed automatic transmission and standard front-wheel drive or available all-wheel drive. Equipped with the optional 4K Tow Package, conventional towing doubles to 4,000 pounds. 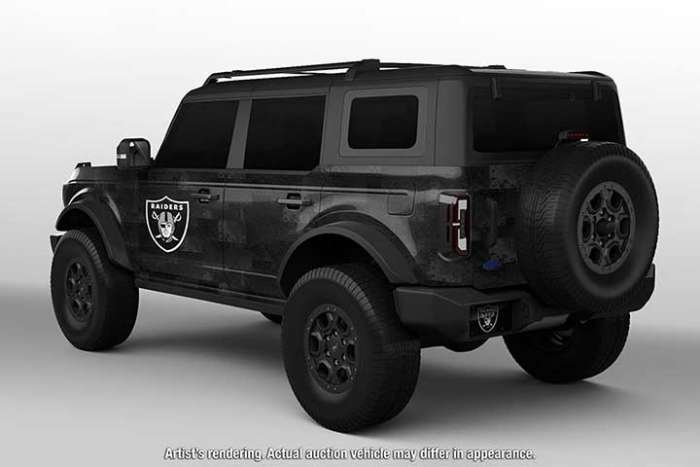 Final Thoughts
I’ve always wanted to go to a Barrett-Jackson auction. I watch it on TV and the energy seems exhilarating as some of these highly-collectible vehicle get the hammer dropped on them. But above all else, two of the most-anticipated vehicles in Ford Motor Company’s modern history will be there to see (Maverick and Bronco).

I have a great deal of interest in both vehicles. Now I’m searching for plane tickets to Vegas. Who’s coming with me? Leave me your comments below.