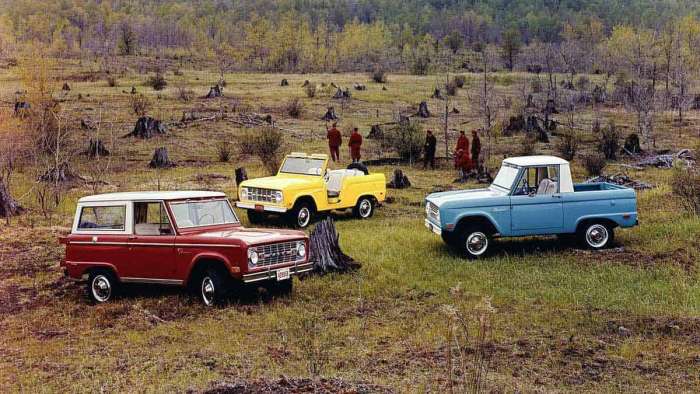 1960 and 1970 era Ford Broncos are seeing significant increase in value according to one study. As Bronco enthusiasts become impatient waiting for the new Ford Bronco, that has only driven up the demand and appreciation for the classic iconic Bronco in roadster, wagon and pickup truck iterations.
Advertisement

We’ve written a lot about the coming-soon two-door and four door 2021 Ford Bronco. The anticipation is palpable and any new information on the sixth-generation Ford Bronco is in high demand.

I have nothing new to report on the Bronco, but expect it to be released late this summer with production beginning very soon. But, I stumbled upon a story on the website NetCredit.com that took information from Hagerty and extrapolated value of classic vehicles and determined which ones are seeing the highest increase.

Not surprising, but several classic Ford Broncos made the list. Eight different Ford Broncos from the 1960s and 1970s made the top 25 list of vehicles under $100K to see the highest percentage of appreciation. 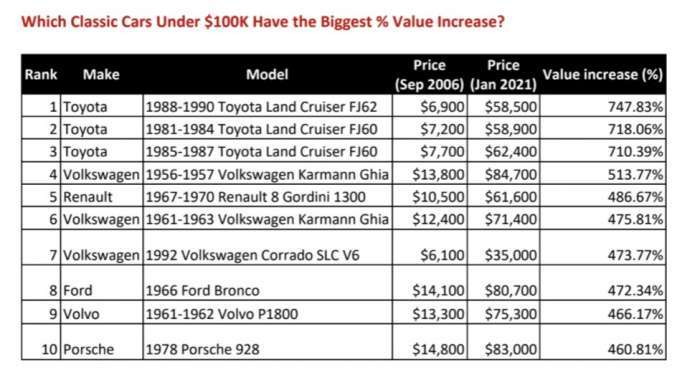 This is the first year for the Bronco, so naturally it makes sense that it would be collectible. 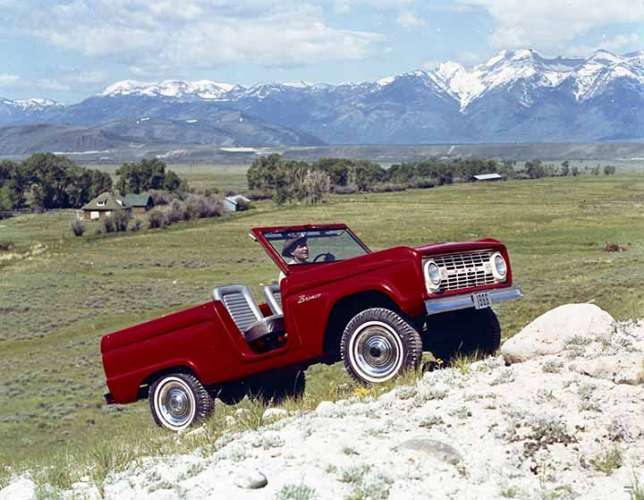 The study by NetCredit showed that according to valuation on Hagerty, that this Bronco had a price/value in 2006 of $14,100. Now, according to the report, the value has increased to $80,700 for a total appreciation value of 472%.

Additionally, the 2dr Wagon 4x4 6-cyl. 170cid/105hp 1bbl version of the 66 Bronco increased in valuation over the same period by 441%. The wagon variant is the most popular choice amongst enthusiasts, and the first year versions are even more in demand. 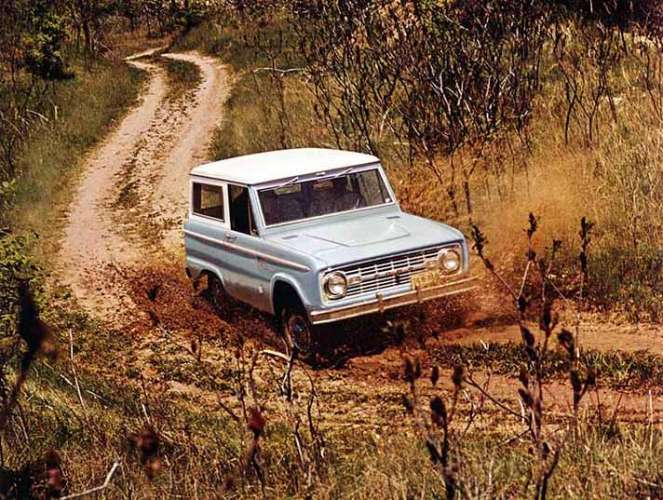 1967-1968 Ford Bronco
These late 60s era Broncos are real darlings of Bronco enthusiasts and highly collectible.
Two variants of the two-door roadster made the list. With the 8-cylinder variant coming in at the 12th spot with an appreciation of 454%. 8-cylinder variants are incredibly popular.

In fact, some Bronco enthusiasts have voiced a wish that the new Bronco would have an 8-cylinder option. As of now, that’s not planned. 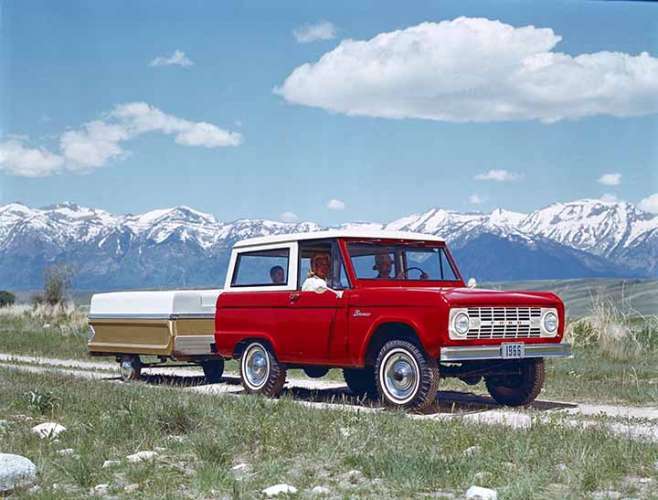 1967-1972 Ford Bronco Pickup
The pickup truck variant (pictured in the main photo of this story) of the Bronco was quickly endeared amongst consumers and remains highly sought after by collectors and enthusiasts. The report indicates an increase in the 2-door pickup variants of this era seeing an appreciation increase of 435% with some of these vehicles fetching more than $85,000.

No pickup variant is planned as of now for the sixth-generation Bronco, but it could happen since Jeep made a pickup version of the Wrangler, called the Gladiator. The Gladiator has had a love/hate reception amongst the Jeep enthusiasts, so it’s hard to say how well received a pickup version of the Bronco would be. Also, that would likely eat into Ford’s cash cow – the F-Series. 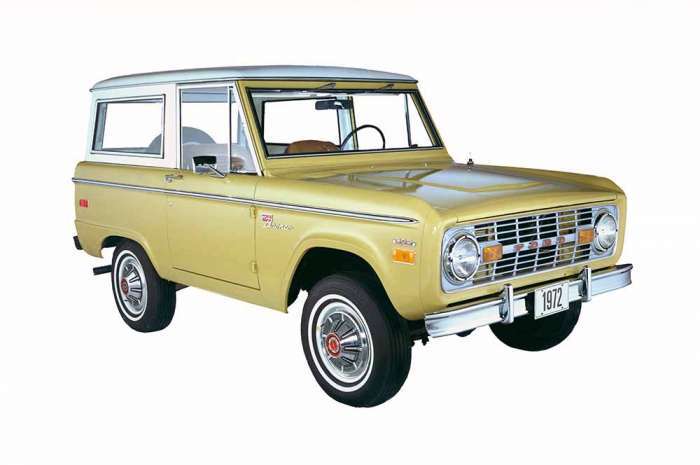 Ford Bronco Wagon
The Wagon variant, as opposed to the “roadster” versions are the ones that are most collectible and most sought after, according to Hagerty. The wagon iterations have mass appeal, although the roadster versions are harder to find.

That’s why the Roadsters were ranked a little higher on the list. But nevertheless the late 60s and early 70s Bronco Wagon sees a 424% valuation increase, with some mint condition ones fetching more than $85,000.

Valuation Methodology
According to the report on NetCredit, by author Barbara Davidson this information was collected and analyzed using the following criteria:
“We collected car price data using the Hagerty valuation tool in February 2021. Prices were collected for the last 15 years (2005 – 2021) for over 24 thousand vehicles assuming “Concours” condition (the best condition). The appreciation of each vehicle was calculated in USD and %.”

See the entire under $100K top ten list below. 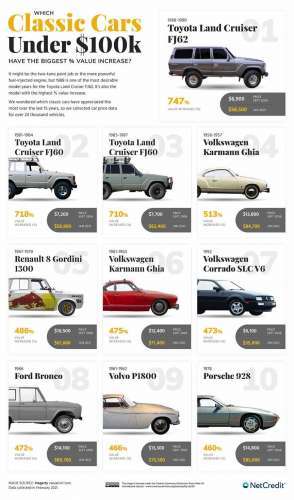 Will Electrification Cause Vintage Car Prices to Rise?
The author made an interesting hypothesis, that as internal combustion technology gets pushed aside in favor of electrification, it could increase the value of classic vehicles like the Bronco even more. 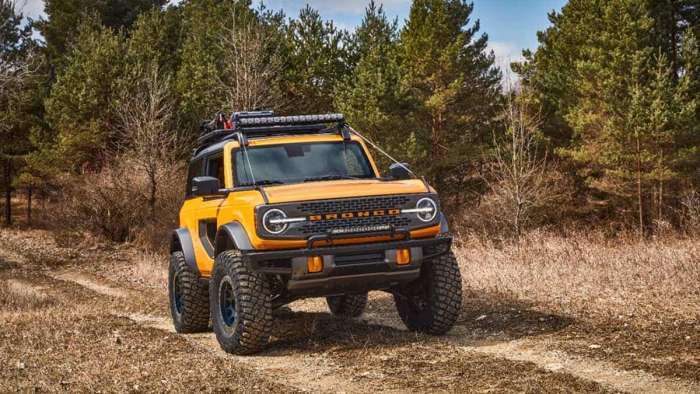 Will the Sixth-Generation Ford Bronco become an instant classic?
I did a story on how some of the more garish colors of the Bronco Brand vehicles (like cyber orange) could fetch more resale value than some of the most standard, classic colors. And this was met with comments that said: “Who cares, I’m never going to sell my new Bronco.”

I get that, and certainly support that. Without a crystal ball, I would bet that the sixth generation two-door and four-door Bronco will become highly collectible. There has been so much build up to this iconic vehicles relaunch and such a high demand that it will impact the short-term and maybe the long-term value.

However, Ford claims to have more than 125,000 Bronco orders to produce. If that’s true, market penetration will drive down the collectability of these Broncos, but it won’t drive down the passion that exists for them.

What do you think? What is your all-time favorite Bronco? Leave a comment below.