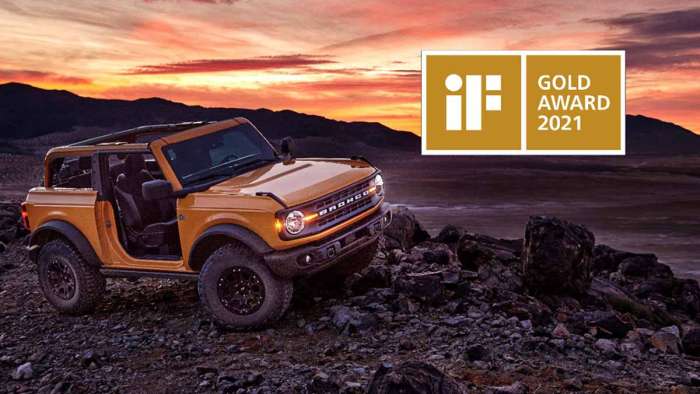 More Than 125,000 Ford Bronco Reservations Have Been Converted Into Orders, With 70 Percent New To Ford

More than 125,000 of the 190,000-plus Bronco two-door and four-door reservations in the United States and Canada have now been converted into orders according to Ford, with more than 70 percent of customers new to Ford as deliveries begin this summer. 2021 Ford Bronco wins illustrious IF Design Gold Award as international firm affirms iconic Bronco ‘redefines the lifestyle SUV.’
Advertisement

In news reporting there’s a phrase that’s called “burying the lede (and yes that’s spelled right)”. It means you bury the important news of story further along in your coverage.

Today, Ford released a press release about the two-door and four-door Bronco winning an international design award. More on that news a little further down as I don’t want to also bury the big news.

The lede was buried in that press release where Ford proclaims that they’ve converted more than 125,000 of 190,000 plus Bronco reservations into actual orders. This is not shocking, nor surprising. Another interesting fact that was thrown into the press release was that more than 70 percent of those order conversions are new to Ford.

So, this means that with the return of the iconic Ford Bronco, Ford is pulling in new customers to the Blue Oval. Just where they are coming from is uncertain, but you can assume a chunk of them are likely consumers who might’ve only considered the Jeep brand in the past. Likewise, some of those 70 percenters might’ve come from the Subaru world, since that manufacturer has made a living out of being a lifestyle vehicle.

Ford has proactively marketed the Bronco as its own standalone brand. In fact, my Torque News colleague Marc Stern reported that 100 dealers nationwide would be set aside as Bronco-exclusive dealers. That tells you how convinced Ford is that the Bronco brand will be strong a contender for years.

Those new 70 percent to the Ford brand came for very specific reasons. Perhaps they’ve been fans of the Bronco line for a long time and disappeared when the Bronco was discontinued. With the pandemic, off-road adventures, park explorations and the such became more popular, so that plays well with the Bronco brand too.

Additionally, the Bronco Sport (aka Baby Bronco) has had strong sales with more than 30,000 units sold so far, showing that anything Bronco is hot and a commodity.

Bronco Named a Pillar of Design
The crux of the press release Ford sent out bragged (rightfully) about the award Bronco won from an international design firm.

Out of nearly 10,000 entries, Germany-based iF International Forum Design GmbH has named Bronco among its top 75 pillars of design across numerous disciplines and industries for elevating the brand and attracting new customers.

The design group, which has been recognizing products for design excellence annually since 1953, is honoring the all-new Bronco with its prestigious iF Design gold award 2021 for its “pragmatic, emotional design” that “brings the thrill of its iconic forebear into the 2020s.”

“It’s great to see the world of high design meeting the wild and to be recognized for our efforts,” said Paul Wraith, Bronco chief designer. “Our focus was getting our users out deep into the landscape exploring, which inspired some breakout product design. We’re excited that the innovations our team loved are the same things Bronco customers will love.”

For Wraith and the Bronco Design team, the award validates their efforts to create a modern off-road SUV while maintaining the design simplicity of first-generation Bronco models from 1966-77. Visual cues such as a single-piece grille, round headlamp bisected by a bar with Bronco name, front fender trail sights, and redacted surface language free of superfluous styling or detail were highlighted by iF Design jurors.

“Many products are relatively simple objects, from a design standpoint,” Wraith said. “Vehicles are not. With Bronco, they looked at a number of things – from the modularity and the cleverness of the doors storing in back, to the larger notion of bringing back an icon.” 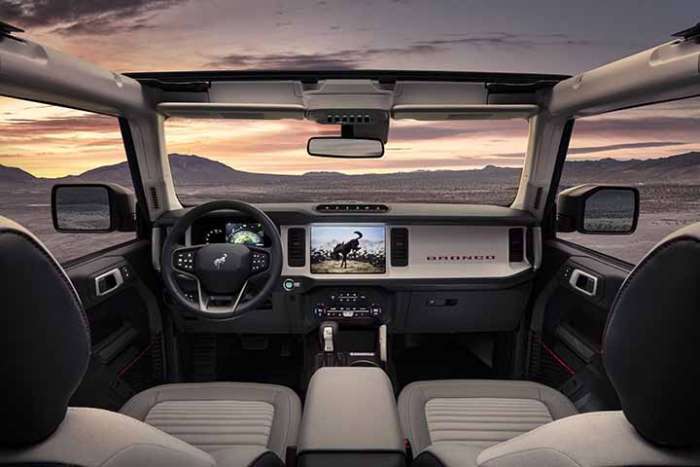 When Will The Ford Bronco Be Delivered?
Ford says the sixth-generation Bronc will start arriving at dealerships this summer. A report on Bronc6G.com shows that some early orders have been bumped up in production, scheduled to start in June. This shows that Ford is on schedule for late summer deliveries of the much-anticipated sixth-generation Bronco.

However, with all the production delays related to the chip shortage other news outlets have reported a delay in production up to three weeks. It’s uncertain when production starts officially for the Bronco, but one thing is certain, the anticipation is palpable and the exciting is brewing. Many orders, for sure won't deliver as a 2021 model year, and rather as a 2022 model year.

Ford downplaying the conquest sales of the Bronco is puzzling. They should be putting this on their ads, and making a huge deal about 70 percent new customers to Ford Motor Company.

Kudos to Ford for the design award, but next time, don’t bury the lede.

Where do you think these new customers are coming from? Leave me your comments and thoughts below.